The Spinoff and Jucy sent Alex Braae on a long odyssey around the country during the election campaign. Here are his picks for the local radio stations that were most surprising and impressive.

A road trip is all about seeing the bits in the middle that you miss when you travel airport to airport. Visiting towns off the beaten track, and meeting people you wouldn’t get a chance to otherwise.

But all of that requires you to get out of the car sometimes, and the downside of a road trip is that you spend a lot of time gripping the steering wheel. It can get boring without something good to listen to.

So when you’re experiencing so much new stuff, why listen to whatever you’d have on at home? The same podcasts and Spotify playlists will still be there when you get back. Perhaps it’s time to turn the old fashioned radio on and start flipping through the dials.

Over the course of the election campaign, I was out on the road in a Jucy van, which had a very good quality radio on it. And it was an absolute joy to find new stations along the way, and dip into the communities that produce them.

So here’s a non-exhaustive list of some of the local and independent stations I came across, and how to pick them up. And the point is to showcase stations that have sounds you might not hear elsewhere – you can get More FM pretty much anywhere in the country, if that’s your jam. But apart from internet streams (which many stations now have) these ones are best picked up over the hour you’re driving through one of the many beautiful parts of the country.

A truly eclectic community access station that has great crisp sound across the Wairarapa region. I turned it on in the evening and heard about stockcar racing, then turned it on again the next morning and heard about organic farming and the maramataka. In between there was a selection of thoughtful pop music, with a heavy emphasis on local artists.

Paekākāriki FM – 88.2FM in the town of Paekākāriki and not far beyond that

If you’re driving down the Kāpiti Coast and getting tired of it all, pull in to Paekākāriki, a charming seaside village populated by chilled out locals, retirees and artsy hippies. That’s exactly what the station sounds like too, with a huge array of residents putting together shows, including kids at the local school.

There’s a reason why 1XX keeps on winning radio awards for non-surveyed markets (outside the major centres.) It’s an almost perfect local station, keeping right on top of everything that is happening around the region. At the top of each hour, short nationwide bulletins are followed up by much longer regional bulletins. The events guides are essential for anyone coming to town, and in a telling detail, the ad-breaks are packed with Whakatāne businesses wanting to reach their community.

Without doubt, one of the best music selections in the country. Ake, owned by iwi Ngāti Whātua, play the perfect mix of old disco bangers, R&B, and tunes in te reo which lean heavily on reggae. And it’s just music as well – song after song after song hitting the right spot. The only exceptions are the oddly tuned station jingle, and occasional pre-recorded voice breaks that tell some of the stories of the rohe.

If you’ve passed through Wellington at any stage of the last two decades and turned on Active, there’s a reasonable chance the station will sound pretty similar today. Fortunately, they hit a sweet spot in the groove around then and have just kept hammering away at it.

Honourable mention: Active is part of a wider network of stations with various degrees of connection to student communities, including Radio One in Dunedin, RDU in Christchurch, bFM in Auckland, and Radio Control in Palmerston North. They’re all pretty good. 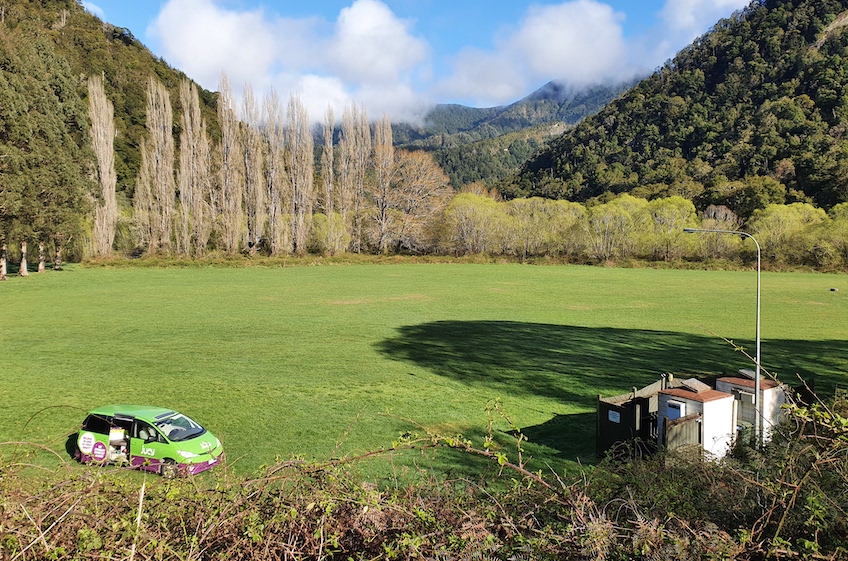 A community radio station in Kawerau that has a weirdly international footprint. Galaxy plays a lot of rock and country, and has some reasonably big names in that space recording stings on their behalf.

Hamilton’s main community radio station has a very different sound depending on when you tune in. Much of the day leans towards talk and discussion, particularly conversations around communities that aren’t well served by traditional media. And then in the evening, there are some excellent specialist music shows – like Bluegrass, Garage Punk, Island Reggae, and whatever the hell the show The Outer Limit Frequency feels like highlighting – a recent episode focused on sludge metal.

Brian FM – across the upper South Island but especially around Blenheim

The music selection on Brian is fairly down the line – they play a lot of classic rock of the last five decades or so, spanning from the likes of Fleetwood Mac up to the Foo Fighters. You can get that sort of music at a lot of stations, or even on a Spotify playlist. What you really listen to Brian for is the station stings – weird, pithy, self-deprecating, sometimes pretty borderline bad-taste jokes, but always an entertaining way of breaking up the music.

Hokonui – across the rural lower South Island on a range of frequencies, and also weirdly Taranaki

A slightly cheeky entry on this list, because it’s part of the major label NZME stable. But it’s also arguably the only unashamedly rural radio network in the country, and so you’ll definitely hear perspectives that you might not otherwise get. A lot of country music, with more talk based shows at peak times around breakfast, midday and the afternoon drive.

Central FM – Waipukurau and the Central Hawke’s Bay on 105.2FM

One of several stations around the country that is sort of both inside and outside the NZME stable. Perfectly easy listening, with good local news.

Trunk FM – Taumarunui and the King Country on 88FM

They play “the music you remember and more”, and it seems like the name of this station is a bid of a nod to the glory days of Taumarunui, when trains on the main trunk line stopped regularly. Most of the music does fall into that oldies and classic rock format, but if you tune in around breakfast on weekdays, or on Sunday morning, you’ll hear some hearty local shows with an ear out to what’s going on around the region.

I haven’t got a clue what this station is, but I only found it around Waimate in South Canterbury on a low power frequency. It plays a mix of country, oldies and easy listening, and feels deeply appropriate when you’re cruising around a historic town with a high proportion of retirees.

Tahu FM – across the South Island on a range of frequencies

One of the absolute slickest breakfast shows in the business, and excellent for practising your te reo – host slips in and out of two languages throughout it but it’s generally totally understandable for even the most monolingual among us. In terms of music, there’s lots of reggae but a bit of pop as well.

A major reason for the existence of Te Hiku is cultural revitalisation and te reo Māori, and they do an excellent job of that. Quite possibly the best station in the country to hear not only te reo tunes, but also interviews between fluent hosts and guests. Not being able to speak the language myself, I’m taking the word of others on this, but I’m told that the interviews are searching and insightful.

Listening to Tracks isn’t so much about the music, which at the moment is focused on modern country music. In fact, Tracks itself probably won’t exist in 2021. The point of listening to 96.1 in Christchurch is to hear the broadcasters of tomorrow cutting their teeth live on air. The frequency is the domain of the NZ Broadcasting School, and each year they come up with a new format to test their students with.

But the best advice of all: Just start turning the dial

Keep your eyes on the road, of course, or get someone in the passenger seat to do this. But one of the best ways to find music and stations you didn’t realise you’d like is to spin the wheel and see what happens. It might be in a language you’re not familiar with, or playing music from someone else’s culture. But that’s what a road trip of discovery is all about.

This content was created in paid partnership with JUCY.

Use the promo code SPINOFF20 and get 20% of all bookings.

Location: Base to Base only (same pickup and drop off location)

Vehicle: All cars and campers