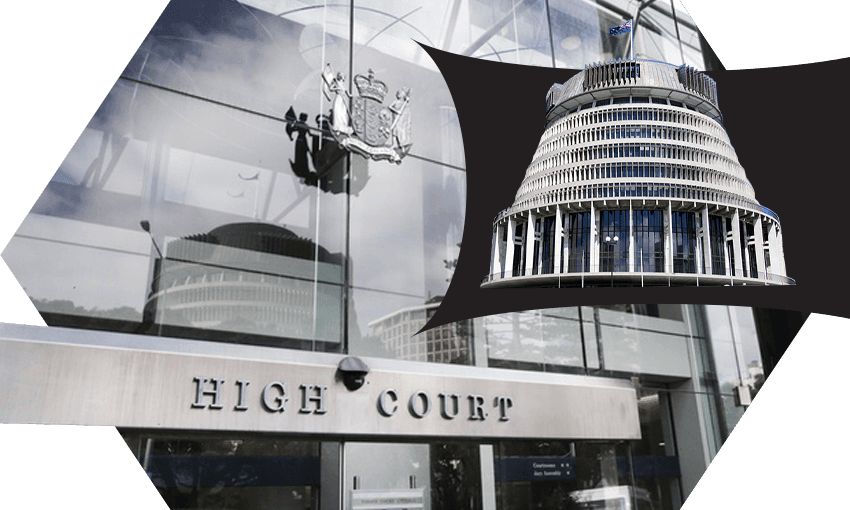 Reason to cheer the High Court quashing a vaccine mandate

While those occupying parliament grounds felt vindicated by the decision, it reveals the absurdity of some of the claims being made there, argues Toby Manhire.

In the middle of Friday afternoon, the High Court in Wellington published a decision that reverberated quickly across Molesworth Street and into the occupied grounds of New Zealand’s parliament. Justice Francis Cooke had set aside a government mandate, which was to have kicked in today, that would have required employees of the Police and Defence Force to receive two doses of the vaccine.

The decision hinged on whether this mandate breached fundamental rights under the New Zealand Bill of Rights. And, if so, whether those breaches were “demonstrably justified” under the terms of the act. The judge ruled that, yes, there were breaches, on the right to refuse a medical treatment and the right to manifest religious beliefs. And, no, he wasn’t persuaded they were demonstrably justified.

Why not? The stated basis for the mandate had been to keep the workforce ticking, rather than to limit the spread of Covid-19, he noted, and the effect of the mandate would be negligible. It only applied to a small number of unvaccinated staff – 164 in police and 115 in the Defence Force out of a workforce of more than 15,000 apiece. The Ministry of Health advice to cabinet had been that further mandates beyond those already in place were not required to prevent spread of the virus. And, get this, said the judge: there was every chance that existing, internal mandates imposed by the two outfits would have covered most of those 279 people. Its material difference, to paraphrase the judge, may have been diddly-squat.

Conscious, perhaps, of the febrile mood around the corner, Justice Cooke warned against drawing the wrong conclusions. “I should make it clear what this case is not about,” he said in the final furlong of his judgment. “The order being set aside in the present case was not implemented for the purposes of limiting the spread of Covid-19. Health advice was that such a further mandate was not needed for this purpose. Neither should the court’s conclusion be understood to question the effectiveness and importance of vaccination. The evidence shows that vaccination significantly improves the prospects of avoiding serious illness and death, even with the omicron variant. It confirms the importance of a booster dose given the waning effect of the first two doses of the vaccine.”

This was not the bit, it may astonish you to learn, that anti-vaxx groups alighted on when trumpeting “we have been vindicated!”

Another thing this was not: a judgment on the vastly wider mandates covering health and education workforces, nor on the vaccine pass system. As Otago law professor Andrew Geddis pointed out, “Wider questions about whether mandates are needed for public health purposes to stop the spread of Covid aren’t answered by this case – so it shouldn’t be read as casting any doubt over whether mandates and vaccines are important to stop Covid.”

Justice Cooke did thoughtfully remind the government that Covid legislation requires it to ensure that the justifications for mandates – which, yes, do curb freedoms – must be regularly revisited. David Skegg confirmed yesterday that his group will provide advice on precisely that. They will consider the reality that the omicron strain is better at evading vaccination than previous variants. They’ll also consider the reality that the vaccine still significantly helps slow transmission. And its extraordinary power in helping to limit risk of severe disease, hospitalisation and, you know, death. Today, as we fly up the steepest slope of the omicron rollercoaster, as hospitals cancel procedures with wards becoming filled by omicron-infected patients, it’s probably not the best time to hurl all the mandates on the fire.

Not that any of that stopped the usual suspects from tipping the news into their giant bowl of misinformation soup.

One conspiracy-peddling pseudo-news site, shared variously on New Zealand misinformation and anti-vaccine channels, announced it like this:

Actual fact check: The High Court absolutely, unequivocally did not say it was “a gross violation of human rights”, the case absolutely will not be used in that way, and putting a little “Fact checked” note under your headline does not change the very clear reality, which is that you, creepy offshore website, are talking execrable, embarrassing, dangerous nonsense.

Anyone teetering on the edge of a rabbit hole dug into the lawns of parliament by the insurrectionist conspiracy theorists in their midst might want to stop and consider that High Court decision again. A non-trivial number of prominent figures present at the occupation, as well as numerous others online, both from New Zealand and abroad, are set upon nothing less than, in the words of one expert who monitors their feverish communications, “the total evisceration of democracy”. They want the institutions of government destroyed, the politicians – along with journalists, scientists, police, judges and others – put on trial and executed. They discuss in public view whether they should use nooses or guillotines. I don’t believe anything like the majority protesting at parliament think that way, but an increasing number appear to be getting sucked down the conspiracy funnel.

New Zealand’s system of government comprises three branches: the legislature, in the form of parliament; the executive, or the government ministers; and the judiciary. Here is an example of that third branch, independent from the others, issuing a ruling which the other two would not welcome. This is the system working. It’s a good thing.

You might love, hate or quibble with the High Court decision (the bit on religious freedom, according to some experts, appears to be based on a tenuous argument put forward about the role of aborted foetal cells). But it’s a sign of health. It shows us that a vital check on executive power is fit and functioning. Hell, maybe we don’t need to overthrow the government after all.