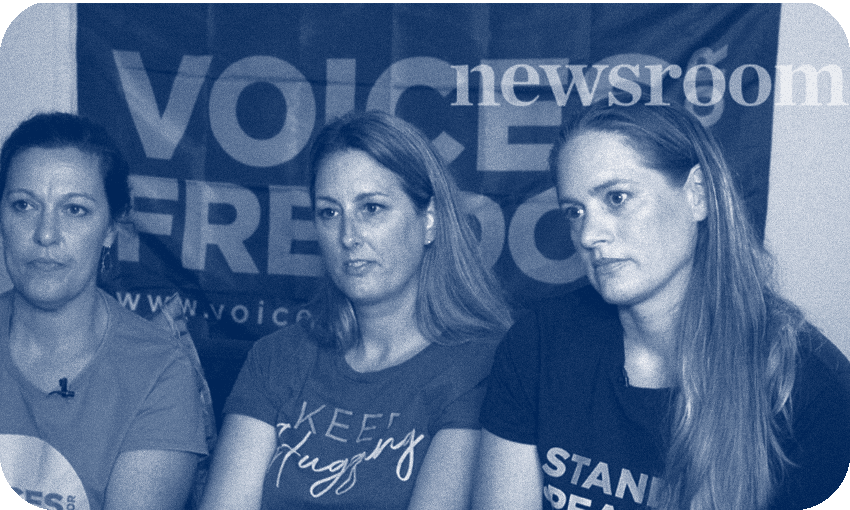 Giving a voice to Voices for Freedom

When does ‘reporting both sides’ become a platform for misinformation groups?

It’s been a long three weeks. On February 6, the day two convoys left Cape Reinga and Bluff to travel to Wellington in protest against vaccine mandates, there were 208 new cases of Covid-19 in the community.

On March 1, tents still covered parliament grounds in an ongoing protest marred by police altercations, threats, conspiracy theories and raw sewage, and there were 19,566 new community cases. Hospitalisation rates, while still growing and putting a strain on the healthcare system, have stayed low for longer thanks to Aotearoa’s high vaccination rates.

One group that has worked very hard to counter the nationwide vaccination efforts is Voices for Freedom, formed in December 2020 by Claire Deeks (food and wellness influencer), Alia Bland (crochet designer) and Libby Johnson (knitting designer) as an anti-lockdown, anti-vaccine group.

Voices for Freedom isn’t the largest or most influential group at the protest (though they do claim to represent “over half” of the protesters). In fact, they’ve stayed largely out of headlines, with Convoy NZ 2022 and conspiracy-theory platform Counterspin proving to have the loudest voices.

But over the past 15 months, Voices for Freedom has campaigned extensively against the Covid-19 vaccine, including nationwide distributions of at least three pamphlets (one was 29 pages long and another was designed to look like official government material) making specific and false claims about the development and efficacy of the vaccine. The pamphlets’ claims were debunked by various scientists. As of February 2022, the Advertising Standards Authority (ASA) had upheld 101 complaints about Voices for Freedom flyers, with rulings that they were “misleading” and “socially irresponsible”. They’ve also paid for billboard campaigns about the vaccine and other issues, an expensive venture that’s led to (unanswered) questions about the organisation’s funding.

One of the leading reporters covering the rise in, and dangers of, misinformation has been Marc Daalder, senior political reporter at Newsroom. Daalder’s ongoing work has led to him being the target of online extremism and his exemplary work covering the protest has only exacerbated the violent rhetoric against him and his colleagues.

So it was all the more shocking to see Newsroom publish a report under the “Newsroom Investigates” banner providing a high-profile platform to Voices For Freedom, allowing their claims about the protest and their own organisation to go largely unchecked, and presenting the “freedom village” in Wellington as something akin to a school camp. “We’ve decided to give one group – who are vaccine- and mandate-focused – their say,” is the reasoning in the short written introduction.

There has been a consistent division in protest descriptions from the beginning. Those within the protest claim it’s all peace and love, with live music and morning yoga. Most interacting with the protest from the outside, particularly journalists and anyone wearing a mask, have reported verbal and physical abuse, threats and intimidation. Iwi leaders from across the motu have come together to condemn the protest groups, with chairman of Taranaki Whānui’s Port Nicholson Block Settlement Trust, Kara Puketapu-Dentice, saying, “This occupation has not been peaceful. Abusing our kuia, our koroua, our tamariki, is not peaceful.”

At an event originally presented as anti-mandate, it has become increasingly apparent that Voices for Freedom and most everyone protesting alongside them is anti-vaccine, as well as dabbling (at the very least) in conspiracy theories. There has been an abundance of accusations of conspiracy, cover-ups, government control and more towards the media from protesters.

The 15-minute report posted to the Newsroom website includes only a cursory nod to this dichotomy, showing footage of unrest juxtaposed against yoga and food stalls. But the bulk of the report instead focuses on what award-winning reporter Melanie Reid refers to in the written introduction as “the actual people core to the protest’s cause and movement from a small but not insignificant minority of Kiwis who feel marginalised by government orders”. These people are the Voices for Freedom founders, who take Reid on a tour of the protest, stopping by the childcare and food tents, bypassing the Trump signs and the placard comparing Jacinda Ardern to the Christchurch terrorist.

Introducing Voices for Freedom in her voiceover, Reid says the organisation “provides legal support to unvaccinated people who have lost their jobs, campaigns against mask wearing and was behind a major pamphlet drop questioning the effectiveness of vaccines”. The pamphlets described as “questioning the effectiveness of vaccines” are the same deemed “socially irresponsible” and “misleading” by the ASA and thoroughly debunked by scientists and health professionals around the country.

As they walk through the site, Reid asks about the origins of the organisation.

Reid: “You guys started it, yeah?”

Three mums with concerns about the vaccine rollout for five to 11-year-olds and no mention of anti-vaccine misinformation spread or suggestions of government cover-ups.

Then there’s an interview with “food coordinator” Gina Beecroft. Reid asks about food donations and meal sizes, support from the community and groups working together to feed everyone. Transcribe the interview and remove the names and it could be mistaken for a community report from a school fair.

During the sit-down interview with the three founders – who are wearing Voices For Freedom t-shirts and sitting in front of a Voices For Freedom flag – Reid asks where the group’s funding comes from. They’re given the floor to present a lengthy and waffly answer about being funded by everyday New Zealanders, while never going into any detail about wealthy donors. There’s no follow-up or request for evidence. Nor is there any interrogation into their methods of distribution (pamphlets, digital billboards, message boards frequented by far-right groups).

Instead they speak of just wanting mandates to end and how no single protest group is responsible for what others within the occupation are doing. At the end of the video, the women are given the final word, a catchy one-liner asking government officials to speak with them. Just three mums wanting to chat.

The video has comments disabled on the Newsroom site, and the Facebook posts sharing it also have no comment section. The article has not been tweeted. This isn’t uncommon, though usually comments are disabled to avoid the spread of vaccine misinformation. Despite a lack of promotion and condemnation from the wider public, the report has been viewed 46,000 times and is currently the most-visited page on the site. Why? Because the protesters have been sharing it. The same groups that claim the media is under government control. The same groups that name the likes of Daalder on their execution lists. A host of anti-vax accounts shared the article, praising it while taking a swipe at Daalder, calling him and a colleague “lying low-life opportunists”.

Voices for Freedom dedicated a large portion of a recent email newsletter to promoting it. “In a time where balanced reporting has been rarer than a politician’s tootsies on Parliament grounds, we were pretty happy with the final result,” it read. “We were grateful for the opportunity to discuss the incredible community initiatives happening at ‘Freedom Village’,” it continued, before urging readers to share the story far and wide.

People say a truly impartial piece of journalism will anger all parties. So if the organisation that hates the media and is led by a woman who thinks the lockdowns were all a “cover-up” is promoting your report on them, that’s when you may have to consider that something went wrong. Mark Jennings, co-editor of Newsroom, said the report did in fact anger all parties, with emails from anti-mandate supporters claiming Reid’s questioning was “aggressive, sceptical and disrespectful”. And “criticism by pro-mandate people who thought it ought to have raised ‘negatives’ such as funding (which it did), actions of those in crowd vs police (which it did) and the group’s anti-vax stance (which is obvious).” An “obvious” anti-vaccine stance that was not addressed at all in the 15-minute video. Reid declined to comment on the record about the report.

There’s a need for reporting on both sides of the mandate debate. There are stories of those with valid concerns about the vaccine mandates losing their jobs and livelihoods. Just last week the High Court quashed an impending mandate for the police and defence force. But those were not the stories told in Newsroom’s report. Instead, in an apparent move to present “both sides” of the protest, Reid provided a platform to a group that remains banned from Facebook after spreading misinformation. To present the protest through the lens of “three Auckland mums” with no mention of the harm their spread of misinformation during a pandemic has caused is wilful ignorance at best, dangerous enabling at worst.