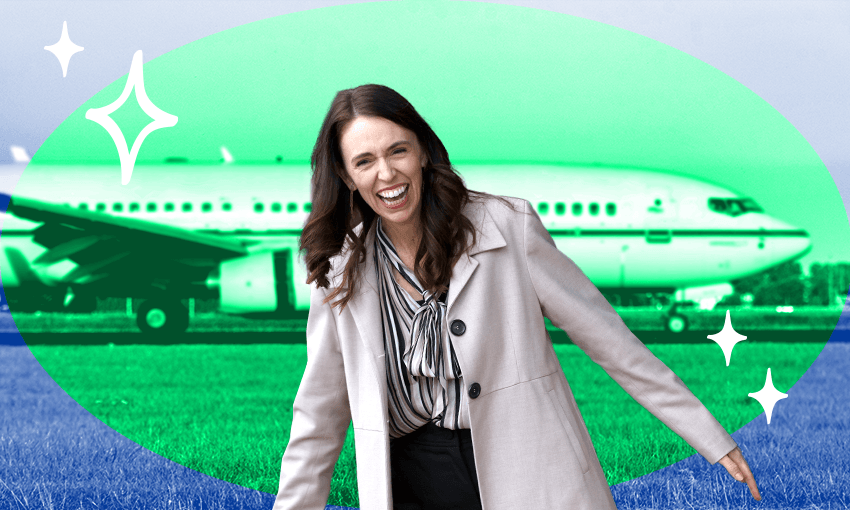 After a US trip that ticked all the boxes, the PM arrives to a more prosaic set of challenges – and a familiar message from the polls.

“Jacinda Ardern is New Zealand’s Gorbachev.” That was the headline on the Australian edition of The Spectator this week. An improvement, at least, on the assessment of a US politician who six months ago called her a “Lenin with hair”, in league with “satanic communists”, or the fabulist headline in the reliably swivel-eyed Trump media bible Breitbart yesterday: “New Zealand Socialist Jacinda Ardern, in Power After a Sham Election, Gets Warm Welcome from Biden”.

Hyperbole notwithstanding, the Spectator’s central argument was uncontroversial. For Ardern, like a lot of leaders including the former Soviet president, “there is a considerable disconnect between her high regard internationally and the discontent she is facing domestically”. And with the exception of, say, the Spectator Australia, wingnut Republican state senators and Breitbart, that’s true enough. At the end of a highly successful US trip which exceeded any reasonable expectations, the scene back in Aotearoa will be more prosaic, the mood grumpier. The adrenaline runs slower.

Labour Party president Claire Szabó tried to harness some of the DC feel-good factor by firing out an email to supporters even as Ardern was making her way to the airport, praising “our amazing PM”, a “landmark White House meeting” and a “hugely successful first trip to the US since Covid”, as well as a “a truly incredible speech” at Harvard that “no other world leader could have delivered”. It was an opportune moment to shake the tin for donations, but the afterglow will be brief; in more ways than one, immediately upon landing Ardern goes from international to domestic.

While there may be more geopolitics than usual across the months to come – an in-person meeting with Albanese is a priority and New Zealand will have an important part to play at next month’s Pacific Islands Forum – for the most part the focus is local. Three Waters. Fair Pay Agreements. He Waka Eke Noa and the formula to bring farming into the Emissions Trading Scheme. Co-governance. The health system overhaul. Housing. And so on. Coursing through it all: inflation and the cost-of-living crisis.

The 2020 election was an aberration. There will be no Covid election sequel. MMP was built to avoid majority one-party governments. Elections are almost always close. The pandemic is not over, but politically we’re inching back to the norm. The last four opinion polls provide a clear picture, and it’s a picture of a knife edge. In most, but not all, of those polls, National and Act are a whisker ahead of Labour and the Greens. The Māori Party is suddenly being sighted wandering the halls of parliament with a shining crown under its arm.

With, say, 16 months to the election, the parties in parliament today all look likely to be returned. While Act might have lately bobbled up and down, in large part according to National’s level of competence, David Seymour has hauled the party out of purgatory. Across the five elections before 2020, Act averaged less than 1.5% of the vote. Today, pending some calamity, they’re assured of a return to parliament, comfortably above the 5% threshold. The Greens, meanwhile, are defying naysayers and the gravity of small parties that support governments to sit around 10%. Neither Act nor the Greens has ever been part of a formal governing coalition in New Zealand. One will, I’d wager, by the end of next year.

All of which means we’re in for an early start to the long season of pre-election rulings-out and bottom lines all round. A National government will hinge on Act support. A Labour government on the Greens. Reasonably enough, we’re going to want to get a sense of how they might look and what they would prioritise. The same goes for Te Pāti Māori.

It’s useful in that light to look not just at the individual parties in the polls, but – for want of a better word – the blocs. Take TVNZ-commissioned Colmar/Kantar polling, the most recent of which was this week: if you splice out the urn-shaped two worst years of the pandemic, you can see a kind of reversion to mean. True, New Zealand First isn’t included, but you get the drift.

Another Labour message issued this week, one much less upbeat that Claire Szabó's, came in the form of an attack ad on National leader Chris Luxon, zooming desperately into his face to upbraid a shortage of new policy announcements.

In six months as National Leader, how many *new* policies do you think Chris Luxon has announced? pic.twitter.com/hONQecSqRK

It contained at least a couple of clues to Labour's thinking. First, they’re moving already into campaign mode. Second, they’re determined to goad National out of the small-target strategy – the approach that worked for Anthony Albanese’s Labor Party in the Australian election. It might not make for exciting elections, but it’s not hard to see why Team Luxon would go the same way: steer away from big, sweeping pledges; talk about economic management; let the election be decided as a referendum on The State of Things.

From that standpoint, the most hopeful data point for Ardern revealed this week came in the Talbot Mills corporate poll, as published by the NZ Herald. That showed the "right track/wrong track" gauge moving in the government’s favour, with 51% saying the country was on the right track against 40% picking the wrong track. The previous poll had 48% to 42%. It's still a much lower "right track" figure than the peak of the pandemic, when it was in the high 70s. But it could mean something. Or it might just be a burst of turbulence on the way back down to Earth.