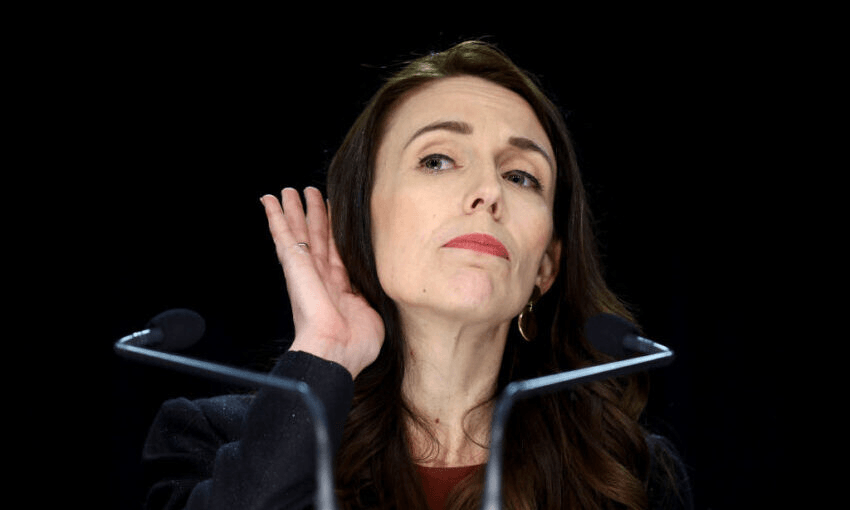 Jacinda Ardern seeks clarity from someone in the press pack during the cabinet announcement at parliament. (Photo by Hagen Hopkins/Getty Images)

The Covid election is over. Here comes the Covid cabinet

Jacinda Ardern seeks clarity from someone in the press pack during the cabinet announcement at parliament. (Photo by Hagen Hopkins/Getty Images)

Jacinda Ardern has unveiled a cabinet line-up with plenty of surprises, and a fair bit of history-making. Justin Giovannetti reports from parliament.

Following what she deemed the Covid election, Jacinda Ardern has appointed her Covid cabinet. The group contains a number of firsts, including what could be the world’s first cabinet minister dedicated to beating Covid-19.

The new cabinet, built around a health team to battle the coronavirus and an economic team to rebuild from it, will represent a substantial change in the character of the country’s government after Labour’s resounding victory last month.

When the cabinet is sworn in later this week, Covid-19 is expected to be at or surpassing record levels across the US and Europe. At the top will be Ardern, still prime minister and head of the country’s national security apparatus, also charged with reducing child poverty.

Ardern will be joined by new deputy prime minister Grant Robertson, who retains his powerful finance minister role but adds the infrastructure ministry to his list of responsibilities. He’s now in charge of saving the country’s economy from the worst downturn since the great depression. Robertson has long been Ardern’s most trusted lieutenant and his new title reflects it. He’s also the country’s first openly gay deputy prime minister.

Labour deputy leader Kelvin Davis had been offered the role of deputy prime minister, twice, but turned it down. He’s now the top ranked Māori voice in cabinet, responsible for corrections, children, oranga tamariki and Māori crown relations. “I think Jacinda and Grant are the dream team,” he told reporters today.

Nanaia Mahuta is the unexpected pick to take over as New Zealand’s first female foreign affairs minister. The country’s face around the world will now be a wahine Māori wearing a moko kauae.

Following three years of New Zealand First leader Winston Peters as foreign minister, she’ll have big shoes to fill. Peters had an impressive contact list and involved the country in big conversations well above what its small size would suggest. Mahuta will also hold the very non-foreign job of local government minister.

There’s substantial diversity across the next 28-member executive, the body that includes cabinet and ministers sitting outside it. Of the larger executive, 13 are women, eight are Māori, 14 are white and four identify as LGBTQ.

“It is both a cabinet with huge merit and talent, who also happen to be incredibly diverse. I think that’s an important point to make, these are individuals who have been promoted for what they bring to this cabinet. They also reflect the New Zealand that elected them,” said Ardern.

While the cabinet has grown in size and now encompasses a number of new faces and more Labour MPs, many of the most important jobs remain in the hands of a small number of ministers who are close to the prime minister.

Chris Hipkins took on the health portfolio four months ago, while keeping the education ministry. Both those jobs represent a significant amount of what a government does, especially a Labour administration. He held them while also remaining minister for the public service and the important position of government house leader, who is responsible for getting legislation through.

Today, Hipkins got little relief. He kept all those positions expect for health, which has now been split in half. Hipkins is now the minister for the Covid-19 response. Testing, tracing, quarantine, the border and flights all remain under his control. He’s the day-to-day operator of the Covid response and the de facto head of a large new health team within the cabinet.

Ayesha Verrall, an infectious diseases physician who wrote a report urging the government to improve its coronavirus tracing program before she ran for Labour, is the new associate minister for public health. She’s responsible for food safety and seniors. She’s one of only a few new MPs who have jumped right into cabinet in the past few decades. Speaking with reporters, she admitted Covid-19 might have something to do with her rapid promotion.

“If you’re a country in the middle of a global pandemic and you have a doctor in infectious diseases it would be wrong not to use that talent. My view also is that the best way to add value was around the cabinet table,” said Ardern.

Andrew Little is the new health minister. That job is now focused on pushing through major changes to DHBs and the health care system. Little spent the weekend rereading the Simpson report, the roadmap for the massive rebuild of the system he’s now been asked to undertake.

Little lost the justice portfolio to Kris Faafoi. Nearly all the judicial ministries are now in the hands of Māori MPs.

Peeni Henare has been given the task of improving health outcomes and housing for Māori, while also taking over the defence job. He put his hand up for that last one, it’s not a natural fit for Labour members and his grandfather was the last commander of the Māori battalion.

David Parker is one of the few of Ardern’s inner circle not to pick up a new job. He’s still attorney general and environment minister. However, he’s been given the momentous new task of scrapping the resource management act and designing new rules to govern how nearly everything is planned and built in New Zealand. Megan Woods, the duct tape minister of the last cabinet who was put to work fixing everything, has now been told to focus on perhaps the country’s greatest challenge: housing.

Robertson spoke briefly with reporters at parliament today and was asked if he’s Ardern’s successor. “She doesn’t need a successor,” he answered. He’ll need to practise that one. It won’t be the last time he’s asked the question.