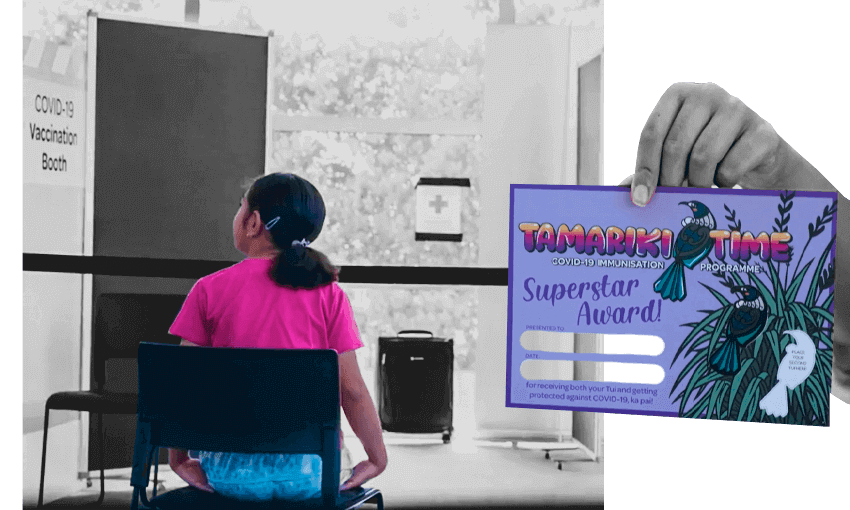 ‘A lot of catching up to do’: Vaccine rates for Māori kids are already lagging

A fortnight in, the contrast is stark. The paediatrician who stood alongside Chris Hipkins when the 5- to 11-year-old rollout was announced says it’s not too early to be demanding answers.

A few days before Christmas, Chris Hipkins announced, along with a slew of measures to counter a virus that “keeps throwing new curve balls”, the rollout of paediatric vaccines. Children aged 5-11 would become eligible to get their first dose from January 17, said the Covid response minister.

It came, by chance, a few hours after the Waitangi Tribunal issued the findings from an urgent inquiry into the vaccine rollout for Māori. The government decision to reject advice from officials to adopt an age adjustment for Māori in the vaccine rollout had led to breached treaty principles of active protection and equity, it found, while Māori health providers had been sidelined.

Speaking to media, Hipkins said decision makers had “learned from our experience with the adult rollout”. A fund of $120m had since been set up to support Māori providers and substantial resource would now be directed to iwi, hauora and community organisations, with a focus on Māori who lived in remote communities. There was no need for Māori to be put at the front of the queue because supply was not an issue – in effect there was no queue, he said.

Standing alongside Hipkins at the December 21 press conference was Dr Danny De Lore (Ngāti Tuwharetoa), a paediatrician at Rotorua Hospital who had been a strong critic of the original rollout and urged the government to target tamariki Māori in the rollout to come. “Māori and Pacific organisations have already demonstrated,” he said in the Beehive theatrette, “that they know how to deliver vaccination programmes effectively in their own communities. As Māori paediatricians we are encouraged by the government making a commitment to by-Māori-for-Māori input, including ongoing technical and implementation communications and delivery of vaccinations.”

In response to media questions, De Lore said the tribunal findings would be used “to hold the government to account” on the tamariki rollout, but that “the indications from government are that they are listening, that they’re taking on board those lessons”. He was reserving judgment, however. “As the weeks go by towards the start of this vaccination programme, we’ll find out more about what the government’s commitment is.”

Just over a fortnight after vaccinations became available to 5- to 11-year-olds, the signs are not encouraging. The latest reported numbers from the Ministry of Health show that 20% of Māori aged 5-11 have had their first dose; among the remainder of the 5-11 population, the corresponding figure is 43%.

Does that stark contrast suggest a repeat of the inequities identified in the original rollout, or is it too soon to judge?

“I don’t think it’s too soon to be asking the government exactly what they’re doing. Because those numbers are really disappointing,” De Lore told The Spinoff. “In December we might have hoped that by this time those numbers would be a lot closer, but most people that I’m working with aren’t that surprised that they’re low. So it’s definitely not too early to be asking: what exactly are you doing to address this?”

They added: “We ask those in charge of designing the paediatric vaccine roll-out to consider the principles of equity, Te Tiriti o Waitangi and social justice and to take this historic opportunity to change the direction of the last 250 years.”

That is underscored by another grim data point: among children under 12, Māori account for more than half of all cases since delta struck, and more than 60% of hospitalisations in the age group.

De Lore is not alone in expressing concerns. “It is concerning that inequities are again evident,” said Dr Dianne Sika-Paotonu, an immunologist at the University of Otago in Wellington. “Vaccination rates with respect to Māori and Pacific children, tamariki and tamaiki are lagging behind those from the general population for this age group. An equity focus that reduces barriers and builds trust will help everyone get the help and services they need at this time.”

“I know it’s early days, but these inequities are unacceptable,” said Rhys Jones, a public health physician at the University of Auckland specialising in hauora Māori. In a Twitter thread, he wrote that a “VERY different” approach from the original rollout was required, “a mana motuhake approach. And yet, so far at least, we seem to be getting business-as-usual from the government. That needs to change asap – the arrival of omicron means time is of the essence. Equity delayed is equity denied.”

The Ministry of Health had launched initiatives “to address the issues that were identified by the Waitangi Tribunal”, said De Lore. “But I think it’s just been really slow over the holiday period, and now there’s a lot of catching up to do … It’s just a shame it’s got this far behind.

“There are a lot of Māori health providers and a lot of Māori health professionals who are pretty experienced with Covid now. The government needs to be saying to them: what do you need? What can we provide? What do you want? And they need to be working out what strategies or what interventions are proving successful, and sharing that information.”

The continued mushrooming of misinformation made it all the more urgent, said De Lore. “The big concern that a lot of us have is that the void just gets filled with misinformation and disinformation … that can seem compelling when it’s presented by somebody who you listen to. In the absence of anyone you trust or identify with getting you better information, it can really take hold.”

So to De Lore’s central exhortation, to “ask the government exactly what they’re doing”. Chris Hipkins was unavailable for an interview, but in a statement pointed to a programme that spans a whānau based-approach, a series of events and activities, and a data-driven implementation, together with a communications campaign drawing on input from a range of Māori and Pasifika organisations.

A focus on tamariki Māori was “really important work and it’s actively under way”, said Hipkins. “I’m aware that the Ministry of Health has had input with Māori specialists from the Te Rōpu Whakakaupapa Urutā (the National Māori Pandemic Group), iwi and the New Zealand Māori Council, to co-design a specific programme for vaccinating our tamariki aged 5- to 11-years.”

He added: “The omicron outbreak and move to the red setting has presented challenges for whānau and for our vaccinating teams and requires additional new and different strategies to support the vaccination of tamariki. We’re continuing to monitor Māori vaccination rates and significant efforts are focused on this important work.”

Asked at Tuesday’s post-cabinet press conference about the contrast in Māori and non-Māori rates, deputy prime minister Grant Robertson said he was “extremely proud” and “really pleased” with the way the health ministry had worked with Māori stakeholders including health providers, the Iwi Chairs Forum and the National Māori Health Coalition to design and implement the tamariki Māori vaccination programme.

“I think over time you will see those vaccination rates rise considerably for tamariki Māori,” said Robertson, adding that the government has “learned a lot of lessons from the way we’ve gone about the whole vaccination campaign that is now informing what I think is a really good co-designed process”.

De Lore is not out of hope that the statistics will shift over the weeks and months to come.

“It’s quite clear that the government is trying to bring co-design into what they’re doing,” he said. “They’re trying to bring scientific expertise from Māori organisations. So I think lessons have been learned. There is good intent. It’s just a question of the implementation, and how fast it can be done.”