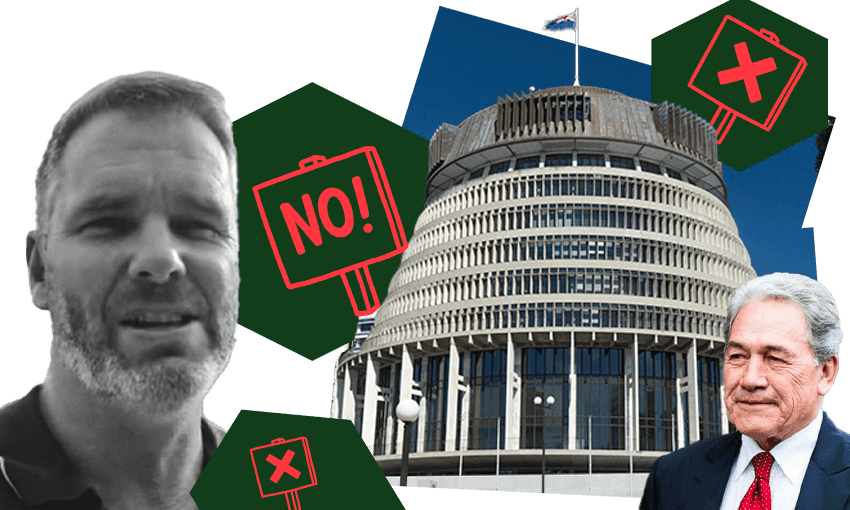 Matt King and Winston Peters have been issued with trespass notices banning them from parliament. Image: Tina Tiller

Matt King and Winston Peters have been issued with trespass notices banning them from parliament. Image: Tina Tiller
Opinion

Whatever you think of Matt King’s politics, banning the leader of a fledgling party from parliament for two years is daft in principle and plays into the hands of a crowd desperate to fuel paranoia, argues Toby Manhire.

Update: Shortly after this post was published former deputy prime minister Winston Peters, who visited the occupation briefly, revealed that he too had been issued with a trespass notice by parliamentary security, which in the honest view of the author is even more dumbfounding, bizarre and bound to backfire horribly.

I was trespassed from parliament once, too. It was  September 1997 and I was editor of Salient, the student paper at Victoria University of Wellington. In protest at proposed reforms in tertiary education, a gaggle of students had floated pamphlets from the public gallery into the house of representatives. The speaker, Doug Kidd, was furious. Parliamentary security issued trespass notices to these paper wretches ordering them to stay away for two years. One was addressed to me. Only trouble was that I had no involvement in the flyer-drop. I wasn’t even there – at the time I was back at the Salient office, playing Tetris on a Macintosh Plus.

I called the head of parliamentary security, who conceded that they were “a bit vague” on some of the identification, alerted the local media (by fax, naturally), and finished up winning a small cash settlement which I spent on an OE.

My experience was a relatively trivial sideshow to a bigger story: the arrest of several dozen students, among them someone called Chris Hipkins, who were wrongly arrested and roughed up after being trespassed. They ended up winning a formal apology and compensation. But the memories trickled back yesterday upon seeing the trespass notice received by Matt King, the former National MP for Northland.

Two months after the occupation of parliament came to an ugly, fiery finish, King had been sent a trespass notice almost indistinguishable from the one I got in 1997. There is no case of mistaken identity here, but there’s a boat-load of vagueness. It’s not clear, for example, whether everyone who took part in the protests once Trevor Mallard declared the grounds closed has been or will be issued with their own ban for two years. King was hardly a ringleader; he attended on a couple of days and spoke in support of the anti-mandate crowd, but he didn’t camp out. He couldn’t be fairly described as an organiser of the occupation, and there’s nothing to suggest that those who were instrumental in running the event – the Convoy 2020 and Freedom and Rights Coalition leaders, say, or Sue Grey, Chantelle Baker, the Counterspin crew, the Voices for Freedom trio, the list goes on – have been sent similar letters. If they had been, it’s a safe bet they’d be making a noise about it.

If King gets a trespass notice, what about Jason Kerrison? The ark-loving musician was there longer than him. Another former MP, Rodney Hide, spoke to an adoring crowd. What about Russell Coutts? Winston Peters? How about the day-trippers who strolled through gawping like tourists at Christiania in Copenhagen?

Matt King has pledged to stand again for parliament as leader of a newly formed but yet to be registered party called Democracy NZ. In my view, he has been hoovered into a conspiracy-sympathetic orbit, promulgates ideas that include dangerous misinformation about vaccines and gives succour to insurrectionist outfits like Counterspin by cheerfully taking part in their disinformation-spewing videos. But as history attests, talking nonsense is no grounds for being kept out of parliament. The bar for banning any New Zealander, let alone one who wishes to take part in democratic processes, should be set high. The letter sent to King fails even to detail the reasons for requiring him not to step foot anywhere in parliament until 2024.

In the (admittedly unlikely) event that King were elected to parliament next year, meanwhile, it would set up what someone who understands such things better than me calls “a doozy of a constitutional collision”, given that he would not be able to sit or vote as an MP until he takes an oath of allegiance, something which the speaker is tasked with administering in the House of Representatives, which happens to be a place he is prohibited from entering. I was personally impressed that no sitting member of parliament chose to address the occupation crowds, but I’d be completely appalled if they were banned by parliamentary security from their own workplace for two years had they done so. This is teetering on the edge of farce.

Quite apart from questions of principle, the ban, issued by the security manager acting with the authority of the speaker, Trevor Mallard, is manna from heaven for the self-described “freedom movement”. Not unlike a priggish student journalist back in the day, they’ll delight in making a meal of it.

The end of the occupation and the end of most of the mandates took the air out of the convoy tyres. The various participants scattered to Peka Peka, to Marsden Point, to a deeply sad fortnight-long “Unite” protest event in Wellington that was attended by almost nobody. Many turned their remaining energies to misinformation about masks, to imported American conspiracy theories, to appointing themselves as sheriffs, even to defending Vladimir Putin’s invasion of Ukraine. And they turned on each other, with mud slinging back and forth about political ambitions, about who had done what with donated funds, about who was a “crackhead”, who was “in bed with the police”.

For a diluted, disenchanted and divided movement, a trespass notice landing out of the blue is a blessing – a chance to rally against a perceived common enemy and cry (as King did) “tyranny”. It’s a blessing, too, for King, in attempting to steal a march on the countless political wannabes that are seeking to harness the energy of the occupation. I’d be amazed if he didn’t soak up the spotlight and take it with him to court, challenging the two-year ban from parliament and seeking to summon a cause celebre.

As police continue the process of prosecuting those who were arrested during the occupation and riot, as picnickers and a range of protesters return to the reseeded lawns of parliament, the last thing that is needed is provocation, especially if it’s democratically dubious and serves the purposes of misinformation super-spreaders. If the goal is to rally, unify and animate the unlawful campers of parliament, this may be the most effective tactic since sprinklers and Barry Manilow.