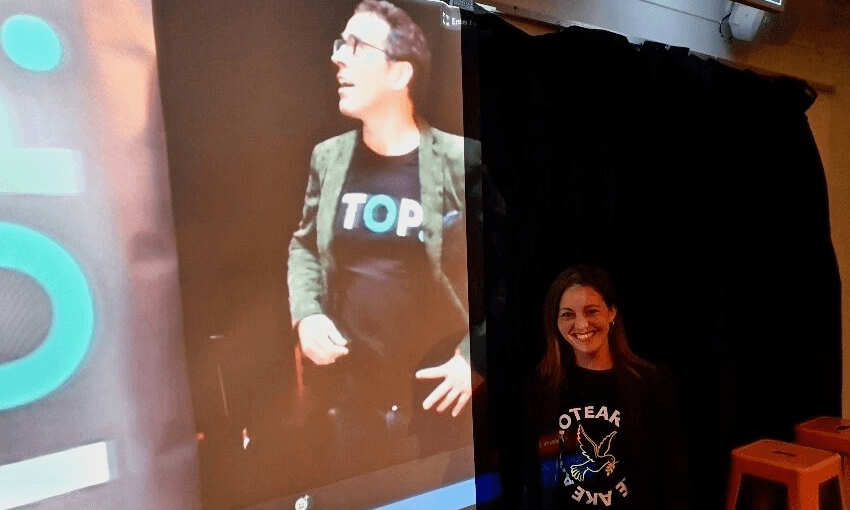 The tenure of Geoff Simmons as leader of The Opportunities Party has come to an end. Alex Braae reports from TOP’s annual general meeting.

The first party leader resignation following the 2020 election has taken place, with Geoff Simmons stepping down from the leadership of The Opportunities Party.

He made the announcement at the party’s AGM in Wellington, on a livestream that was also beamed into a crowded pub room on Auckland’s North Shore.

The meeting began with an election debrief, which highlighted a tight budget, difficulty with building up a campaign ground game and a lack of media cut-through as concerns. The party also went through several creative directors over the course of 2020, which held up progress.

As successes, Simmons cited the party’s performance on digital platforms, large numbers of small donors, and the spread of policy ideas.

“I think it’s safe to say everyone involved in the campaign was disappointed with the result,” said Simmons. “All things considered, we can be proud of what we’ve become.”

Despite a rebrand in 2019, Simmons said more needed to be done to develop the “elevator pitch” for the party to reach voters. “We still haven’t really found our niche in the political landscape. We have on an intellectual level, but not on an emotional level.”

However, Simmons said he was leaving with the party in a stronger state than it was when he took over, following the often explosive tenure of founder Gareth Morgan.

“At the end of 2017 TOP was effectively dead in the water, and now it is a thriving community and a strong movement. In 2019 we had more donors than all other political parties combined.”

Simmons, an economist with the Morgan Foundation before entering politics, said he was stepping down to allow TOP to transition, and for personal reasons. He intends to remain involved with policy development for the party.

Simmons became emotional when speaking about his decision to quit. “My partner and I have discussed starting a family. Being the leader of a party outside of parliament can make that quite challenging, given the time it takes to both lead and volunteer.”

With a comparative lack of funding to draw on, the party’s results in 2020 were down on the 2.4% achieved in 2017. Pending the special votes being announced, TOP is currently on 1.4%, just behind the New Conservatives, who also failed to make it into parliament.

However, that was a marked improvement on some of the polling seen during 2020, which at times had TOP as low as 0.1%.

Simmons sought to give TOP a more affable and welcoming image during his tenure as leader, in contrast to the more aggressive style of his predecessor. The phrase used to describe the strategy at the AGM in 2019 was “more cheek, less arse”.

Simmons said the general sentiment of media stories about TOP over 2020 was much more positive than in 2017, in which almost half of all stories written about TOP were considered “negative”. In 2020, that was down to just 4% of articles.

Simmons said at times over the last few years, he wondered if the party would make it to election day. There were several particularly difficult moments, including the relationship between Simmons and membership representative Donna Pokere-Phillips blowing up. Pokere-Phillips stood for the Māori Party in 2020.

“We spent a lot of 2019 reforming the culture of TOP, and it was pretty hard going at times,” said Simmons.

The policy slate was largely the same between both elections, with a particular focus on housing affordability, environmental issues and promotion of a universal basic income.

Deputy leader Shai Navot will take over in the interim, until a full leadership election can take place. She said the party was “devastated” to be losing Simmons as leader.

“We’re all united in the need for continuity to grow TOP into a bigger and stronger party for the next election, which we fully intend to contest,” said Navot.

Simmons said NZ First falling out of parliament offered TOP a pathway towards 2023. “We are the only viable centrist party that can work with both major parties going forward.”