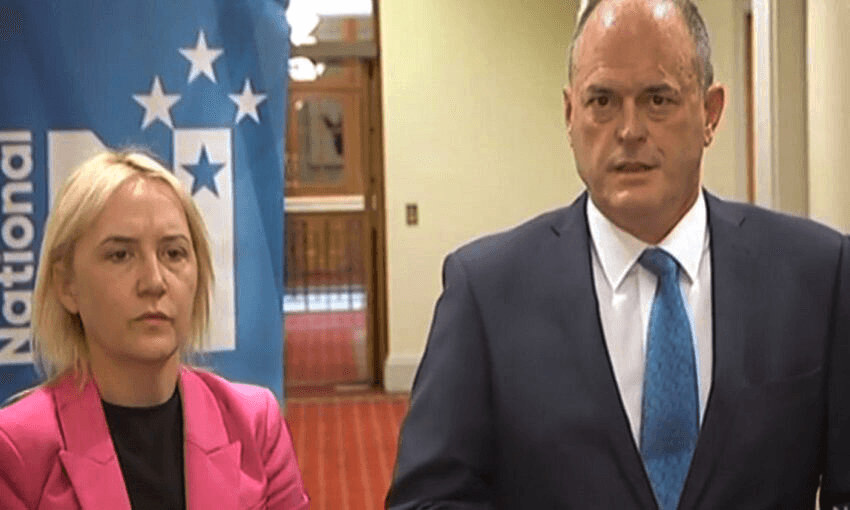 Newshub at 6 opened last night with a back-and-forth between presenters Samantha Hayes and Mike McRoberts. After an intro from Hayes, McRoberts set the scene for a drama inside the National Party. “Responding to complaints about a lack of diversity, they identified Paul Goldsmith as a Māori MP on their front bench,” he said. “But, taihoa, Goldsmith isn’t Māori.”

It was a tantalising intro, but could not possibly prepare the audience for what was to come. The report from O’Brien is an exhilarating, absurdist, dark comedy. A chaotic human drama unfurling over the course of a few hours, with almost all the action centred in a single red-carpeted corridor. Though the story is just a couple of minutes long, it runs the full gamut of political emotion.

The report begins with a short summary of Muller’s comparatively happy start to the day, offering little hint of the darkness to come. Muller is sitting in Simon Bridges’ old seat in the Beehive. He’s ditched his MAGA hat. Around 30 seconds in, the action ratchets up. O’Brien asks him: “How many Māori MPs are there in your shadow cabinet?”

Newshub’s camera operator captures the distant gaze on Muller’s face as the inquiry is made. The shot reveals a painful cross-stitch of emotions. Fear. Regret. Resignation.

Muller starts talking about Shane Reti (ranked 17) and Paula Bennett (ranked 13), before his deputy Nikki Kaye jumps in with what she believes is a helpful suggestion. “And Paul Goldsmith, obviously, is of Ngāti Porou,” she says.

O’Brien immediately senses something is amiss. She asks Muller to clarify. “Paul Goldsmith is your only Māori MP in your top 12, is that right?” she asks.

At this point, Kaye and Muller both appear to receive a vision of what’s about to unfold.

Having established the point of conflict, the action speeds up. The next shot is rushed and messy, conveying the urgency of what’s taking place. O’Brien, having spoken with Goldsmith off-screen, hurries to stop Kaye and Muller at a doorway.

“Is Paul Goldsmith Māori?” she asks. And then the devastating news: Goldsmith, she says, does not believe he is Māori.

Kaye responds with this look, while saying she will “go and talk to Paul”.

O’Brien then chairs an impromptu group discussion on Goldsmith’s ethnicity. The conversation is clearly hastily organised, because O’Brien appears to be recording it on a still-tangled lapel mic in her hand.

Kaye makes a bold opening gambit. “Paul does have Ngāti Porou descent.” Paul lacks the same confidence on this point. “No, no, not [garbled], I’m not, not Māori myself,” he splutters, as Anne Tolley desperately dodges out of shot.

After pausing for Goldsmith to clarify that his great-grandfather had several “Māori wives”, the report diverts to a B-plot involving former National deputy leader Paula Bennett and Judith Collins, who was recently promoted to number four on National’s list. “She’ll be needed in caucus more than I will,” Bennett says with palpable delight as Collins heads to the mics to be interviewed first.

In the space of seven chilling seconds, O’Brien then shows Collins witheringly replying “oh Paula”, before asking media, “is there something wrong with me being white?”

Bennett is then asked about Goldsmith’s alleged Māori heritage. She makes this face.

There’s no time to dwell on Bennett’s emotions though, because Winston Peters has to talk about how he’d not heard of  “Paora Heke Goldsmith”, before cracking up at his own joke.

O’Brien’s report is one of several humiliations for Muller over the last three days. He’s struggled in interviews with Jack Tame on Q&A and John Campbell on TVNZ Breakfast, often flapping his hands in response to tough questions as if hoping to levitate out of the situation.

But Newshub’s story is more memorable than just a hard-hitting Q&A, because of both its dramatic arc, and its sheer number of memorable vignettes. It ends with one final humiliation for Kaye and Muller. One of their key allies, MP Nicola Willis, appears to forget about the leadership coup she helped orchestrate, insisting that Simon Bridges will perform well against prime minister Jacinda Ardern during question time.

When informed of her mistake, Willis wears a mixture of amusement and deep pain. Viewers will recognise her expression. It’s the same one they’ve been making for the entire duration of the report, which will go down as one of the most confronting and visceral political TV stories of our time.

Editor’s note: This story has been updated to reflect the fact that Judith Collins asked media whether there is something wrong with her being white.