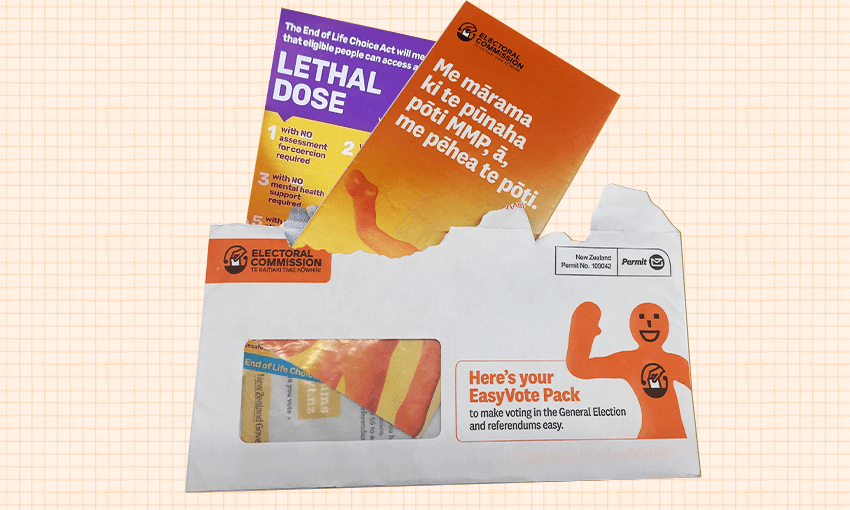 The envelopes included both the official information and a ‘no vote’ flyer. Image: Tina Tiller / The Spinoff

The envelopes included both the official information and a ‘no vote’ flyer. Image: Tina Tiller / The Spinoff

Four members of a Northland household opened their official election information packs to find promotional material from a group opposing the End of Life Choice Act, they have told The Spinoff. Alex Braae reports.

EasyVote packs have been sent out around the country ahead of the October 17 general election and referendums. But some of the orange-man emblazoned envelopes have contained more material than they should have, in the form of a flyer urging a no-vote in the referendum on the End of Life Choice Act, a member of a Northland household has told The Spinoff.

Amber Grant said four of the six adults in her home received in their packs a flyer from VoteSafe, a group that is urging the country to vote against the End of Life Choice Act. The flyer was inside their sealed EasyVote packs when they opened them, she said.

Only those in the household who had the surname Grant got the flyers in their packs. The other two did not. It is not yet clear how widespread the apparent error has been.

“Mine was definitely closed and then I opened it in my little house, down from the big house. And it was definitely in there,” said Grant, speaking about the VoteSafe flyer. “When I went up to the house my parents had theirs up there too. It definitely came from inside my envelope.”

The full EasyVote pack should include only an EasyVote card, candidates for the electorate the recipient is in, contact details from the returning officer, and official information on the referendums.

A spokesperson for the Electoral Commission confirmed that under no circumstances should material from campaign groups be among that information. She said the Commission was aware of the complaint, and is currently investigating.

“The EasyVote pack includes only Electoral Commission material, and the processes in place to produce and deliver the packs mean that it is highly unlikely any other material could be included. We have begun immediate investigations to get to the bottom of this,” she said.

The 3.3 million packs were compiled using an automated process at New Zealand Post sites in Auckland and Christchurch, said the spokesperson. “There is a robust quality assurance process in place and every thousandth pack is checked by Electoral Commission staff … New Zealand Post delivers the packs. They have specific instructions for staff including when the packs must be delivered by. Staff are told that any packs that appear damaged should be returned to the processing centre.”

The Commission had not received any similar complaints apart from the one household, she said.

In a statement, a spokesperson for NZ Post said the organisation “is proud of the part we are playing in this year’s General Election. We have a robust process in place, but are aware of the complaint, and are investigating. For more detail on this issue, please contact the Electoral Commission.”

VoteSafe campaign director Henoch Kloosterboer stressed that the organisation had no role in the apparent error. “The first I’ve heard about flyers supposedly being included in the Electoral Commission’s EasyVote packs was from The Spinoff. I had no prior knowledge and hadn’t been contacted about this by any member of the public,” he said.

“It seems to me that it’s either a deliberate attempt to cause confusion by someone who has opened these envelopes to put them in, or falsely claimed they were inside the envelopes. Or it could be human error at a large mailing and distribution house, where the flyers have incorrectly been inserted into the EasyVote packs,” said Kloosterboer.

Amber Grant said that she had been planning to vote yes in the referendum, but the flyer gave her pause for thought.

“When I first saw that paper, I was like, woah,” she said. “From reading the original [official] pamphlet I thought [the bill] was OK, specific things about terminal illness and stuff, it gave you clear facts about who can use that,” she said.

“But when I read that, I was kind of like – it just looked so proper, it looked totally like the government’s thing. And then I brought it to my sister and she said woah, woah, I don’t think that’s right.”

Under the law, it is possible that the incident could result in a challenge to the referendum result. Otago University electoral law expert professor Andrew Geddis said a petition could be filed against the result on the basis that “irregularities in the conduct of the referendum or of any person connected with it materially affected the result.”

However, he cautioned that it would be a high bar to clear. “Note that requirement of materially affected. So, you would need to show enough info packs were sent out with the VoteSafe material in them, and that this also might have skewed enough votes to turn a potential ‘yes’ vote into a ‘no’ vote.”

He said if it turns out that a very high number of EasyVote packs were compromised, the result was close, and therefore that the compromised packs might have swayed the outcome, then the High Court could declare the result void and require it to be run again.

Did you receive any extra material in your EasyVote pack? Email alexbraae@thespinoff.co.nz