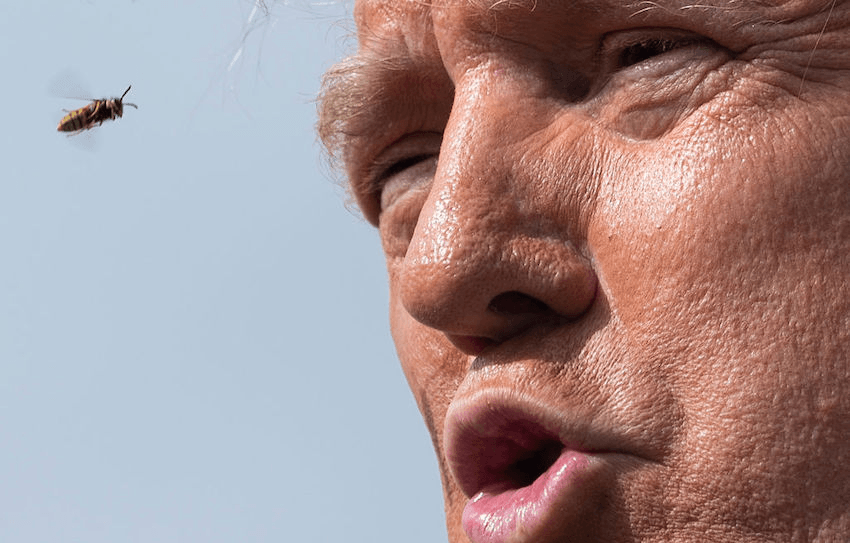 A bee flies near US President Donald Trump as he speaks to reporters before boarding Air Force One at Andrews Air Force Base October 27, 2020, in Maryland. (Photo: BRENDAN SMIALOWSKI/AFP via Getty Images)

Trump may leave the scene, but the savagery of Trumpism will persist

A bee flies near US President Donald Trump as he speaks to reporters before boarding Air Force One at Andrews Air Force Base October 27, 2020, in Maryland. (Photo: BRENDAN SMIALOWSKI/AFP via Getty Images)
Opinion

Win or lose, the shame of Donald Trump’s presidency will be a stain on the United States for years to come, writes former New Zealand prime minister Sir Geoffrey Palmer QC.

Since the election of Donald Trump as President in 2016, the United States has endured much political agony. The election of 2020 does little to relieve the agony and heal the divisions. They will carry on.

America is closely divided into two antagonistic camps. To overcome the problems a decisive election result was required but it did not happen.

Could it be that American experiment in government that began in 1776 has failed?

As at Wednesday at 10am some critical states for securing 270 votes in the Electoral College had not completed counting and their results may not be certified for several days.

The election is very close. President Trump has claimed victory (falsely) and his challenger Joe Biden is expressing confidence he will prevail in the end. It does seem possible that Biden will eventually come through with a narrow margin but it is oh so close.

Stand by for recounts and legal challenges. Trump appears determined that the election will end in the Supreme Court.

In November 2016 I wrote on The Spinoff that the election that year changed the politics of America forever. The election of  2020 demonstrates that remains the case.

No doubt the travails of American politics would be improved by a change of president, if that occurs. But it would be wrong to expect Trumpery will go away even if Trump himself is defeated.

The most positive feature of this election has been the high turnout of voters. Traditionally turnout has been low in the United States compared with New Zealand. The ballots are so long and elect so many state and federal offices that many do not bother to vote.

This time the voters were energised. That has to be good for democracy.

The Trump presidency has rocked the republic to its foundations. Some believe Trump behaves as if he is imbued with the divine right of kings which the American Revolution of 1776 was designed to stop. Trump’s attorney-general Bill Barr, meanwhile, takes the wrongful view that everything the president does is constitutional.

No president in American history has behaved in the way Trump has behaved. The quantity of his lies is legion. Indeed, he is the origin of much fake news about which he fulminates. He continued to lie after the polls closed.

His narcissistic qualities are constantly on view and he encourages division and polarisation. White supremacy rides again in America, 165 years after the end of the civil war that ended slavery.

The notion that a prime instrument of government communication should be tweets directly from the president seems not only novel but dangerous.

The performance of the United States on Covid-19 has been a disgrace. For the president to deny the science, attack his advisers on this and encourage people to attend his rallies without wearing masks is irresponsible. Nowhere in the world has this global pandemic been worse, clearly due to a failure of federal government policy and leadership.

He also denies the science on climate change and has undone many environmental protections and left the Paris Agreement. Trump is indeed an enemy of the planet. He is also an advocate of the American gun culture that poses risk of injury and death to its citizens.

Trump has conducted a sleazy government in which he has combined the power of the presidency with his personal businesses and has not separated the two.

He has refused to make his tax returns available as is the custom. It seems after investigations by the New York Times that this is because, as wealthy as he says he is, he has paid little tax. More than a few of Trump’s enablers and assistants have been indicted and a number imprisoned.

The number of his appointees the president has fired is extraordinary.

Trump has shown a preference for authoritarian leaders like Russian President Vladimir Putin and shown scant regard for the security arrangements of Europe that the United States established with NATO and the Marshall Plan after the Second World War.

His trade policies have damaged the World Trade Organisation, with Trump refusing to appoint appellate judges to the organisation that operates under a rules-based system. They have also hurt American trade.

The foreign policy of the United States has become incoherent and quixotic. International treaties, cooperation and the rules-based system of international law seem to be on the wane.

Far from making America great again, Trump has reduced and damaged its international standing and done much to put it on the road to becoming ungovernable and polarised domestically.

His failure to address important policy issues in any systematic way is distressing. The Republican Party has gone along with all this in defiance of its historic principles. One big Republican effort has been to try to prevent people from voting by erecting barriers to suppress the vote and then not count it. Trump’s assertions on postal voting lack any factual basis.

All this was predictable. Trump doesn’t know how governance works or how politics functions in a democracy, and he has not learned. He has behaved like the reality television star he is, with disastrous results.

What is urgently needed is a return to civility, dignity, truth and respect in American politics. That starts at the top.

At various times I have lived in the United States, spending a total of about 10 years in Iowa, Illinois, Virginia and New York. In Iowa, with a population of three million, there have been more than 1700 Covid-19 deaths. There never was a proper lockdown. The governor is a Republican.

This suggests a profound difference between how Americans and New Zealanders view the responsibilities of the state and the government.

We take the view that the first responsibility of the state is to provide for the safety and security of its people. Many Americans tend to the view that freedom is everything and government should do very little indeed.

Or perhaps the differing approach to Covid-19 suggests more Americans believe the health of people can be sacrificed for the health of the economy.

What does all of this say about American democracy? Well, the first point is that the United States was not designed by the Founding Fathers as a democracy. They were worried about the power of the state and wanted limited government.

The elaborate system of checks and balances they erected was designed to ensure the branches of government would be separated, meaning that in practice outcomes were hard to procure.

In the Westminster system the executive and legislative branches are fused to a degree and that system clearly works better.

To New Zealand eyes, American democracy is deeply flawed because:

Substantial unrest and demonstrations could easily occur. Expect delays in results and an avalanche of litigation in the courts. Even if there is a clear result the new president does not come into office until 20 January 2021 as provided by the 20th amendment to the Constitution.

Paralysis and confusion could  reign until then.

The dangers of populism are there for everyone to see and they may be copied in other countries. Dysfunction in American government is bad for the whole world.