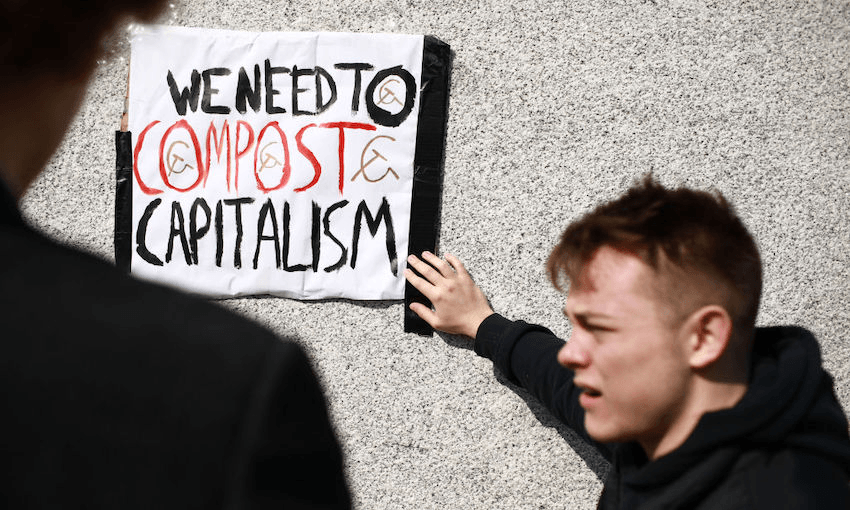 Members of the Marxist Student Federation fix an anti-capitalist sign to the base of the statue of Winston Churchill in Parliament Square ahead of the third climate ‘youth strike’ in London, England, on April 12, 2019. (Photo by David Cliff/NurPhoto)

Scrapping capitalism to save the environment? Here’s why that won’t work

Members of the Marxist Student Federation fix an anti-capitalist sign to the base of the statue of Winston Churchill in Parliament Square ahead of the third climate ‘youth strike’ in London, England, on April 12, 2019. (Photo by David Cliff/NurPhoto)
Opinion

Given the escalating climate crisis and other looming environmental issues, has capitalism proven antithetical to the survival of the planet? Opportunities Party leader Geoff Simmons says no.

I reckon capitalism definitely needs an overhaul, but we shouldn’t throw the baby out with the bathwater. Here are ten reasons why.

1. We don’t have a viable alternative

The first and possibly best reason. Despite all the talk about capitalism being the problem, nobody has proposed a coherent alternative for how to do things. Can we really afford to take on two revolutions at the same time – changing our economic system and saving the environment? The upheaval caused by the first would probably derail the second. If people are put in a survival situation, they will forget about saving the planet and save themselves. Would you burn coal to keep yourself and your family warm at night? Of course you would.

This might seem a little far fetched, but bear with me. A form of communism worked well for a lot of human history when we lived in small tribes. We knew everyone in the tribe so social sanctions held everything together. But as societies grew, trade evolved as a way to build relationships with people outside our tribe. And with trade came more mutually beneficial interactions and less fighting.

Today’s world is no different. Don’t believe me? That was the original idea behind the EU: to get countries trading instead of fighting. Also, read the Origins of Virtue. The point is this: there are difficult times ahead. Without trade, what will stop big countries invading little countries like us?

It is important to note here that the other major economic systems humanity has tried – feudalism and communism – both failed for their own reasons. Anyone who thinks central planning was a great idea needs to read more history, starting with this Danyl McLauchlan piece for The Spinoff.

Communism, in particular, not only managed to produce very poor social and economic outcomes, it was also an environmental disaster. We all know the apocryphal tragedy of the commons. The Soviets burned inefficient brown coal and killed whales even after they were protected simply to meet their fishery quota. Allocating rights over resources gives people an incentive to look after those resources for the long term. As Elinor Ostrom showed, these rights don’t have to be individual property rights as we know them in the Western world.

4. Capitalism is showing rays of hope

Contrast this with the slightly more promising story of capitalism. As countries get richer, their environmental credentials tend to improve. They set limits to protect the environment. That’s because, in the developed world, people have the luxury of caring about the environment.

In most developed economies, resource and energy use has topped out. Countries are growing, but without consuming more stuff. They achieve this by being more productive – working smarter rather than harder. This is something New Zealand is crap at by the way.

There is some debate about whether rich countries are exporting pollution, but even developing countries seem to be growing in a less resource-intensive way than the now developed world did. So there are reasons for optimism. Yes, we have a long way to go. But at least we are on the road.

5. We can make capitalism work better

All this is totally possible through reforming our tax and welfare system, and making polluters and resource users pay. We know how to do it – we just lack the political will.

6. We need to offer a hopeful future

Doom and gloom won’t get people changing the world. It will only have them hunkering down and stockpiling baked beans for the impending apocalypse. To motivate positive action, we have to show there is hope for the future. Capitalism is central to offering hope, as I’ll continue to set out below.

7. We need innovation and new technologies

To meet our environmental challenges and keep anything like our current way of life, we need to innovate. We need new technologies, and fast. We need all our scientists, engineers, and business people thinking about how to reduce our environmental impact.

One of the best ways to do that is through incentives. We have to make improving the environment profitable. How, you ask? See my comments above about making polluters pay. Once businesses are paying the true cost of their operations, just watch them innovate!

8. Productivity, aka doing more with less

One key critique of capitalism is that we can’t have endless growth in a world of finite resources. This is partly correct – we have limited resources and in the past capitalism often squandered them. However, while resources are limited, the human imagination is not. More innovation is always possible. Humans can always make things better. We need a new kind of capitalism that focuses our creative capacity on doing more with less.

Perhaps the best example of this in recent times is the smartphone. Think of all the gadgets that once existed that are now rolled into your smartphone: a telephone, a watch, a camera, a video camera, an alarm clock, a stereo, a compass, a GPS… the list goes on. While smartphones aren’t fully integrated into the circular economy as yet, they are certainly a step up on buying all those different gadgets.

9. We will need to import some innovation

New Zealand won’t be able to innovate all the solutions we need by ourselves. Think of all the things we currently use that require fossil fuels. At the very least, we will need to import electric versions of those. Think electric bikes, electric vehicles, electric trucks, electric bulldozers, plus wind turbines and solar panels to power them all. New Zealand has never been a good manufacturer of this sort of stuff. Realistically, we need to keep trading with the world to afford all the stuff we will need.

10. Returning to the land is nonsense

Of course, there is another way to solve the environmental crisis without innovation. We could all return to the land and become peasant farmers. The trouble is that, for many people, this wouldn’t inspire a hopeful vision of the future. I have no illusions about farming – my uncles are farmers and they work bloody hard.

Besides, New Zealand is a tiny country and we would achieve little for the climate by turning our backs on capitalism and returning to farming. And if the whole world became peasant farmers, millions could starve.

We certainly need to change, and fast. But if we want to save the environment, instead of trying to overhaul our economic system, I believe we should focus on pushing for cultural – some might call it spiritual – change. The changes needed to save our environment and enable a just transition are entirely possible with a few rational reforms to our existing system. The real challenge is to get society to truly embrace them. What a shame that so many fighting to save the environment would prefer to ditch capitalism altogether.