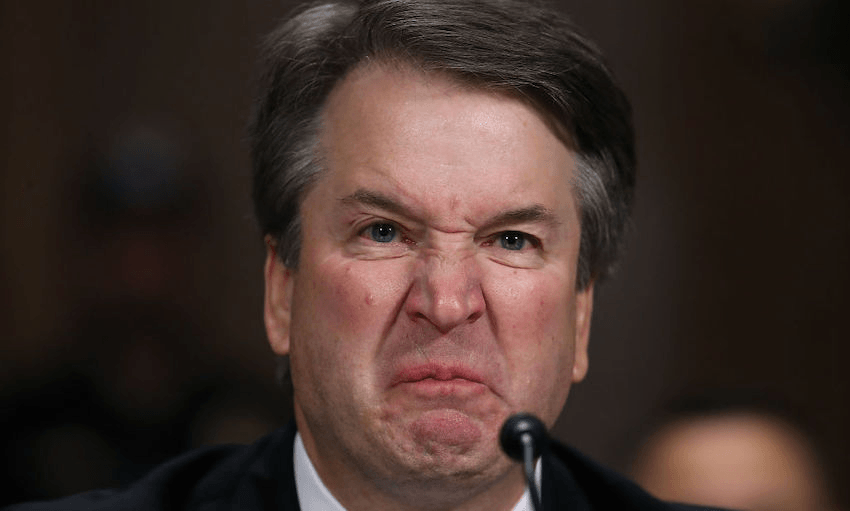 Judge Brett Kavanaugh testifies in front of the US Senate Judiciary Committee during his Supreme Court confirmation hearing, September 27, 2018. Kavanaugh was responding to claims by Christine Blasey Ford that he sexually assaulted her during in 1982. (Photo by Win McNamee/Getty Images)

My law students don’t know who our chief justice is, and I’m OK with that

By Marcelo Rodriguez Ferrere
Guest writer
Made possible by

Judge Brett Kavanaugh testifies in front of the US Senate Judiciary Committee during his Supreme Court confirmation hearing, September 27, 2018. Kavanaugh was responding to claims by Christine Blasey Ford that he sexually assaulted her during in 1982. (Photo by Win McNamee/Getty Images)
Opinion

If you’re like most New Zealanders, you probably don’t know the name of the country’s most powerful judge. And that’s nothing to be ashamed of, writes University of Otago law lecturer Marcelo Rodriguez Ferrere.

Here’s a test for you: name New Zealand’s chief justice. Click on the link to find out the answer! Did you name her correctly? I’m willing to bet that the answer is ‘no’. Perhaps you (justifiably) thought it was Dame Sian Elias, who held the post for nearly 20 years until her retirement in March of last year? But perhaps you don’t know her either; and perhaps you are indignantly huffing under your breath “why should I know?”

Well, the chief justice – head of New Zealand’s judiciary, presiding judge of the Supreme Court, literally “senior to all other judges”, and administrator of the government when the governor-general is out of the country or hungover – is probably someone you should know about. But hey, if you didn’t know, you needn’t worry, for you share some of the finest company that New Zealand can provide: the vast majority – around 85% – of my public law class at the University of Otago didn’t know either when I asked them earlier this year.

At the time, that outcome gave me cause to despair. That sort of knowledge should be central to the study of public law, which looks at the way public and constitutional power is regulated, right?  Well, these past few extraordinary months – a time when public law has gained the most remarkable prominence – have given me pause to reflect on whether that’s correct. Should I have despaired about my students’ apparent ignorance?

My reflection started with what my public law students do know. When I asked them to at the end of last year, the vast majority could pick Brett Kavanaugh out of a crowd. And perhaps you, too, can picture him in your mind. Kavanaugh was the latest appointment to the Supreme Court of the United States, and was, infamous for – at the very least – his indignant anger during his nomination hearings before the United States’ Senate and adding ‘boofing’ to American lexicon.

Now, the reason why Kavanaugh – a judge on a court that has nothing to do with New Zealand – is much more memorable than our chief justice is undoubtedly due to the saturation of our (and the globe’s) media with political news from the United States. But this is the exact point: judicial appointments are political news over there. And while over here the appointment of senior judges is certainly newsworthy, and not devoid of political consideration, few would consider it political news.

Judicial appointments are political news in the United States because the decisions of courts are viewed as overtly political. One only needs to look at a flurry of decisions from the Supreme Court of the United States in the past couple of weeks for evidence of this. SCOTUS blocked the Trump administration’s attempt to end DACA (a programme that protects children of undocumented immigrants); recognised LGBTQ+ people, as, y’know, people, by holding that “an employer who fires an individual merely for being gay or transgender defies the law”; and struck down an anti-abortion law in Louisiana as unconstitutional.

Each of these decisions had important and significant impacts for real people, but the impacts gained less attention than the fact that the cases were decided this way in the first place. Judges, such as the chief justice John Roberts and Neil Gorsuch were appointed by Republican presidents (George W. Bush and Trump, respectively) and therefore were expected to rule along party lines, but did not do so. Roberts, in particular, has raised the ire of conservatives and Republican politicians, some accusing him of “political gamesmanship”, and at least surprising others in siding with the four “liberal” judges on the court. It is, of course, irrelevant that his reasons for ruling the way he did were procedural rather than principled: SCOTUS and its decisions are viewed as inherently political, regardless of their content; it is just another political branch of government.

It is not just the United States’ highest court that is viewed as political. In May, Wisconsin’s Supreme Court struck down the governor’s stay-at-home order to prevent the spread of Covid-19 (incidentally, like clockwork, the state recorded its highest daily increase of cases two weeks later). The reporting of that decision barely mentioned the reasoning behind this decision, instead using it as evidence of “Wisconsin certainly living up to its reputation as an evenly divided cockpit of American cultural and political conflict.”

I mention this case in particular because a similar challenge to that in Wisconsin is occurring in New Zealand (largely based on the rationale explained by my colleagues Andrew Geddis and Claudia Geiringer here, if you’re interested). The eventual decision will rule on whether the lockdown in New Zealand had a sufficient legal basis; whether the government acted within their power in imposing it.

If the High Court holds that it didn’t and the government wasn’t, then we can be sure it’ll be headline news. What won’t be headline news, however, is the name of the judge that decided it, or the judge’s political persuasions. If it is appealed (almost a certainty) to the Court of Appeal and then to the Supreme Court, there won’t be headlines about the chief justice, Dame Helen Winkelmann, surprisingly siding with the liberal or conservative wings of the court, because we don’t have such wings, and neither I nor you know whether the chief justice is a liberal or conservative anyway.

And, in my view, that’s a good thing. It means that in New Zealand, we expect our judges to assess each case dispassionately and free of political considerations. It’s an ideal – no judge has the capacity to be truly neutral, and will always have institutional biases – but it means we view our judiciary as apolitical. The name of the judge, and her political persuasions, are essentially irrelevant. There are structural explanations as to why the United States has different expectations (constitutionally, their courts have far more power than New Zealand’s counterparts in their ability to invalidate legislation, and with greater power comes greater interest and scrutiny) but no less important is the cultural explanation for the difference.

Our general apathy and indifference as to how our government and constitution works extends to not really caring who our chief justice is. And while I usually baulk against such apathy and indifference, given the alternative might be the toxic and bitter politicisation of the judicial branch, I think that I’m OK with that.