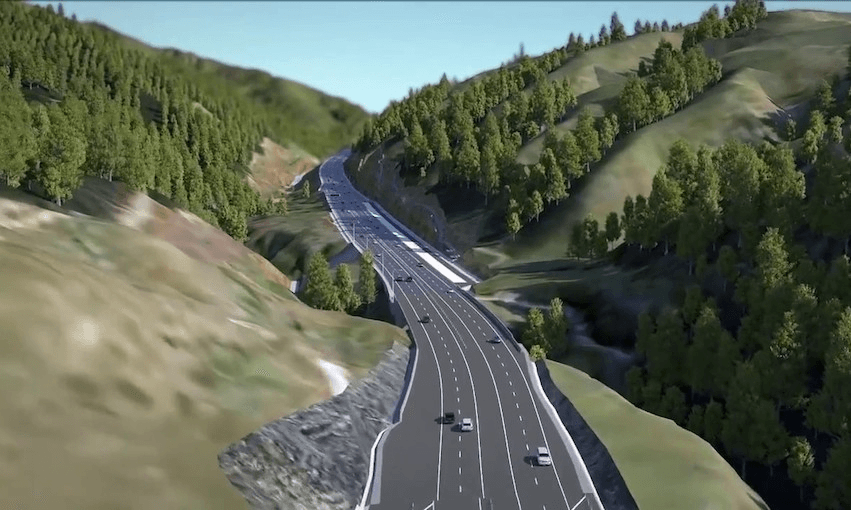 An artist’s impression of a stretch of the completed Transmission Gully motorway north of Wellington (Image: NZTA)

An artist’s impression of a stretch of the completed Transmission Gully motorway north of Wellington (Image: NZTA)
Opinion

We’ve known for a long time that there are significant issues with public-private partnerships, but the pandemic has highlighted just how risky they are, writes Matt Lowrie.

This is an edited version of a story originally published on Greater Auckland.

Covid-19 has dealt the massive Transmission Gully project another blow with announcement that the lockdown means the new road north of Wellington won’t be ready until next year at the earliest. It’s bad news for the taxpayer, and yet another reason to be sceptical about the value of public-private partnerships (PPPs).

When announcing the cost blowout to over $1 billion in February this year, the New Zealand Transport Agency (NZTA) tried to soften the blow a little by announcing the road would be open by Christmas. But then, like all projects around the country, Transmission Gully was put on hold in March as part of the government’s response to Covid-19. Now, as construction ramps up again, Transmission Gully seems to have a unique problem: many of its workers are no longer in the country.

“Close to 100 people who were working on Transmission Gully are overseas unable to return to the project site under Covid-19 border restrictions,” the NZ Herald recently reported. I understand the contractor on the project was flying in construction staff from Australia.

That we’re having to bring in staff from overseas raises the question of how many more large transport infrastructure projects the country is able to handle as part of the government’s overall recovery plans, not to mention all the big infrastructure projects announced in the NZ Upgrade Programme in January. The NZTA says that because other existing roading projects around the country were largely locally delivered, most will not be as severely affected by the pandemic as Transmission Gully.

Of course, this isn’t the first problem with Transmission Gully. The project has been beset by issues over the last few years, including needing 50% more earthworks than originally estimated. Just yesterday it was reported that large sections of the road would need to be relaid due to errors during construction. Earlier this year came the news NZTA would need to pay the builder another $191 million on top of wiping late penalties for the completion of the long-delayed project. The government also announced it won’t toll the road as NZTA believes that introducing tolls would encourage more cars to use the existing coastal road. As travel time savings play a large role in justifying mega projects like this, the fact that a relatively small toll could divert drivers back to the existing road raises questions about just how valuable the investment really is.

The $191 million extra the NZTA is paying is just over half what Wellington Gateway Partnership, the contractor on the project, was asking for and was preparing to take the agency to court over. If it didn’t get a payout, I suspect there was a good chance it would have simply walked away form the job. Given WGP didn’t get all it wanted, presumably that means it’s now losing money on the deal.

If WGP is now further hampered by not having access to staff because it chose to fly them in from overseas, could that raise the possibility it might walk again? If that were to happen the NZTA would need to find someone else to complete the job. I wonder what that would mean for the PPP and the time needed to deliver the project.

The key reason for using a PPP for projects like Transmission Gully, other than the previous government making the NZTA do it for ideological reasons, is that it transfers some of the risk to the private sector. That is why, despite its original estimated construction cost of ~$850 million, we would need to pay an increasing amount starting at $125 million annually for 25 years for the project.

Of note, when the contract was awarded back in 2014, the NZTA said this.

“PPPs allow large and complex projects to benefit from private sector innovation and additional scrutiny of risk from the financiers. This increases certainty of delivery and drives better value for money, as well as effectively identifying and reducing risks and where appropriate transferring these to the private sector. This innovation can also be applied across the wider New Zealand transport network because we don’t just get the road, we also retain the intellectual property.

“The contract guarantees unprecedented certainty for a highway project, as Transmission Gully must be delivered for a set price, and must perform to measurable performance standards for the full 25 years.”

That press release also talks up the builders on the project, who would bring in “innovative approaches from overseas”. While no one could have expected a pandemic to strike, the possibility that overseas workers can’t come to New Zealand is surely now a risk that needs to be considered more carefully. The current predicament also highlights that the builders are really the meat in the sandwich between government and private financiers, who will still get the interest rate benefit.

Of course, this isn’t the only transport PPP New Zealand has underway. The Puhoi to Warkworth project is also being built as a PPP and it will be interesting to see if it has any similar issues.

Perhaps more important is the question of what impact the Transmission Gully fiasco has on PPPs going forward and specifically the Auckland light rail project. The government has been deciding between getting the NZTA to build it or using a PPP with NZ Infra, a joint venture involving the NZ Superfund and CDPQ, the infrastructure arm of a Canadian pension fund. One of the selling points of the NZ Infra bid is meant to be the international experience the Canadians bring, but perhaps that is now a bit more of a liability. Its REM light rail project in Montreal is also a PPP and in January also saw costs increase by CA$230 million.

With interest rates at record lows and much of the risk still sitting with the government, it’s hard to see what value PPPs bring – other than delivering good returns to private financiers. As a procurement expert once told me, the alliance model – used on the Waterview Tunnel, City Rail Link and other big projects – delivers all of the same “design innovation” benefits as PPPs without the extra interest costs. The Covid-19 crisis is a chance to examine how we do things across all sectors of the New Zealand economy, and PPPs are well overdue a rethink.