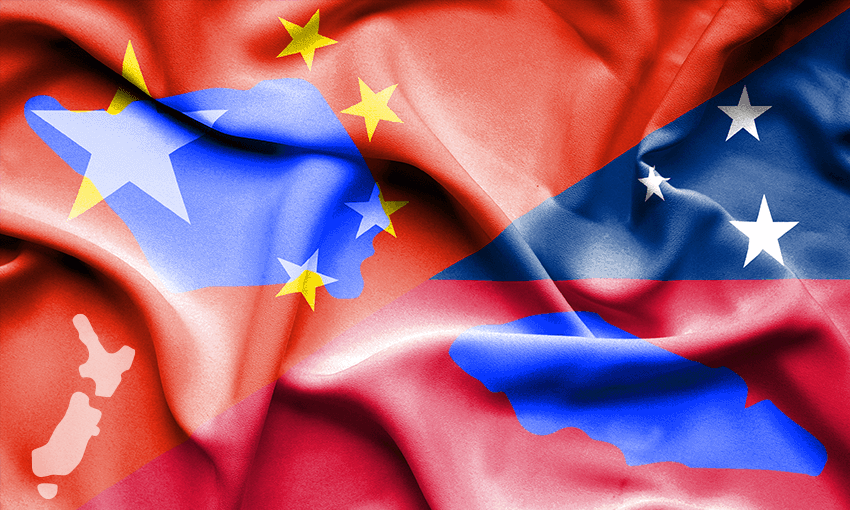 By Leiataua Tuitolova'a Kilifoti Eteuati
Guest writer
Made possible by

After a week of concern about China’s dealings in the Pacific, former Sāmoan diplomat Leiataua Tuitolova’a Kilifoti Eteuati points out that it’s nothing new.

At the end of last month, during a brief visit to Apia by China’s foreign minister Wang Yi, Sāmoa and China signed an agreement on economic and technical cooperation that affirms existing cooperation arrangements between the two countries.

The documents for the handing over to Sāmoa of the recently completed Sāmoa Arts and Culture Centre, and the Sāmoa-China Friendship Park, were also signed, as was an exchange of letters for a fingerprint laboratory to be added to the Sāmoa Police Academy project that China approved for funding last year.

This triggered panic in overseas media, and perhaps in other governments, which were hyper-concerned about the influence of China in the Pacific.

But these exchanges are normal bilateral transactions between friendly countries that routinely emphasise the desire “to strengthen diplomatic relations” and to “continue to pursue greater collaboration” on matters of “mutual interests and commitments”. The two countries have signed several similar agreements over the past 30 years. The documents signed in Apia over the weekend confirmed what already exists between Sāmoa and China, rather than a different approach to their relationship as speculated recently in some foreign media reports and commentaries.

Sāmoa and China have enjoyed friendly relations since Sāmoa established diplomatic relations with China in 1975, becoming one of the first Pacific Island countries to do so. Since then, China has greatly assisted Sāmoa by funding, through grants and soft loans, the implementation of several large multimillion-dollar infrastructure projects, which have delivered significant benefits for the people of Sāmoa. Soft loans are loans with heavily reduced interest rates and favourable terms to the borrower. They are sometimes forgiven or turned into grants. This kind of development assistance has not been available from Sāmoa’s traditional aid donors such as New Zealand, Australia and the United States, which normally provide aid as grants tied to specific projects such as good governance.

In the aftermath of the catastrophic tropical cyclones Ofa in 1990 and Valerie the following year, Sāmoa asked China, a non-traditional aid donor for the country, for development assistance to build a central government building to house government offices instead of repairing the severely damaged old buildings, scattered throughout Apia, which had housed the government offices before the cyclones.

China quickly agreed to Sāmoa’s request, a soft loan was approved, and the construction of a large eight-storey government office building on reclaimed land on Apia’s waterfront was started in 1992 and completed in 1994.

Since then, China has funded and built the sports facilities for the 2007 Pacific Games held in Apia, which included a state-of-the-art aquatic centre; the court complex at Mulinu’u, where all the courts in Apia, including the Lands and Titles Court, are now housed; the National Hospital at Moto’otua, and the new terminal buildings at the Faleolo International Airport, to name some of the major projects.

The government and people of Sāmoa are proud of these facilities, and they enjoy the greatly improved services provided to the public through their use in different sectors. On the other hand, there has been growing concern about the increasing national debt from the loan component of funding as more and bigger projects are planned. There is also growing awareness that while a soft loan may be forgiven or turned into a grant, someone holding such power to decide how much you owe them should be something a country factors into its decision making.

A new government, a new approach

The new government under prime minister Fiame Naomi Mata’afa has been acutely aware of the seriousness of this problem, and it therefore decided, soon after taking office last year, to withdraw and discard the plans for the Vaiusu harbour development, negotiated by the previous government, and expected to be funded under China’s development aid programme. The reasons given for this decision were that the planned huge wharf and harbour facilities were not needed in Sāmoa at this time, and the loan component of the total cost, estimated at US$100m, would increase Sāmoa’s debt to an unacceptable level.

This was a bold decision and it was not welcomed by Sāmoa’s former prime minister, Tuila’epa Sa’ilele Malielegaoi, or the Chinese authorities, as this project has taken several years of negotiations and planning, and they were close to a final agreement to proceed with implementation.

But it was a crucial decision to make because after almost 40 years of continuous HRPP government, it was important that Fiame and her cabinet make a strong statement to the Sāmoan public and to other interested parties that the new FAST government would act decisively and without fear in the best interests of the people of Sāmoa.

The visit by Wang Yi was really about promoting a proposal by China for joint action with the 10 China-aligned Pacific Island countries on issues such as cybersecurity, policing, greater use of land and ocean resources, marine mapping and expanded political ties.

While being happy to listen to Wang on this proposal, Fiame was clearly disappointed with the way it had been handled in relation to the Pacific island countries. Ultimately, the adoption of this proposal would seriously undermine the Pacific Islands Forum, and this is an outcome that Sāmoa, a strong and consistent supporter of the forum, would not be expected to accept.

In this context, Sāmoa agrees with New Zealand that issues that have regional impact, such as security issues in the wider sense as adopted by the Pacific Leaders Forum in the Boa Declaration on Regional Security (2018), need to be referred to the forum for discussion and resolution according to established regional agreements.

The considered decision by the New Zealand government not to send the foreign minister, Nanaia Mahuta, to the Pacific Island countries in reaction to the visit by China’s foreign minister is appreciated, as Covid-19 is still a serious issue for many people in the region, and the positive and active role New Zealand plays in the region is well known and understood. Reactive visits with little substance are mostly counterproductive.

The recent extended visit by Australia’s newly appointed foreign minister Penny Wong, on the other hand, has been timely because it provided the opportunity to inform the region of the measures that the newly elected Labour government in Australia proposes to take in relation to Pacific regional issues. The pledge to act decisively to help combat the devastating impact of climate change and the plan to open up the Australian labour market to workers from the Pacific Island countries are two messages that regional countries needed to hear.

The people in the different Pacific Island nations will ultimately decide on the level and nature of the influence of foreign players in their countries. And New Zealand and Australia are in a position – which countries outside our region do not have – to work constructively with the island countries to offer migration and working opportunities to improve the lives of their people by adding, upgrading and seriously improving the operation of the labour mobility programmes already in place.

In the end, Aotearoa should be confident that a strong and ongoing relationship based on real partnership should hold true.