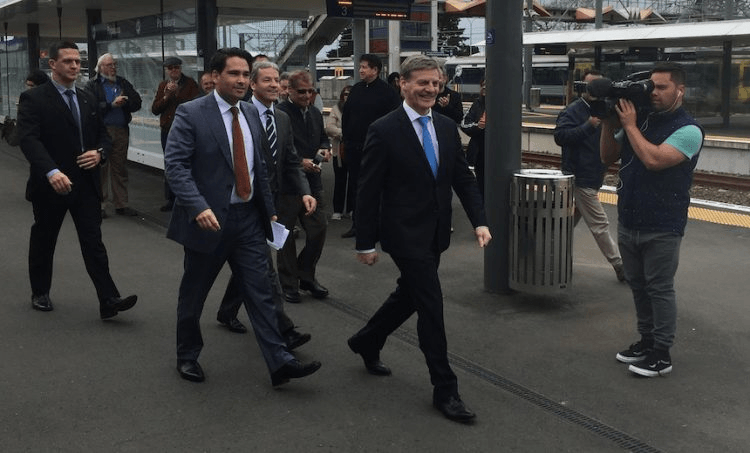 Meanwhile, in the outer suburbs: National launch transport policy at a train station

Two hours after Labour launched its flagship transport policy in the central city, National launched its own 30 kilometres south. Duncan Greive was there to watch.

National unveiled its rail transport policy under a slate grey sky at a train station in Papakura, doing their best impression of obliviousness to the nation’s incipient Jacinda-mania. Bill English was the opening act, talking animatedly about a construction boom, and the power of growth – and what the opposition thought of that word (they fear it).

Simon Bridges was tasked with following up with the detail. This was about a $267m package of tweaks to existing infrastructure: electrification to Pukekohe, the previously dismissed ‘third main’ freight line, double-tracking from Lower Hutt to Trentham in Wellington and some more. Another wrinkle: the Auckland Council’s just-ordered battery-driven electric trains, originally intended for that Pukekohe stretch, would be used for “a single service out to Pokeno”, effectively expanding Auckland’s plausible commuter network halfway to Hamilton – and well outside the city’s boundaries.

A couple of hours earlier Labour had announced their strategy 30 kilometres north at Wynyard quarter, committing to light rail to the airport and, eventually, the Shore, along with picking up the bulk of the congestion free network. The latter is the citizen-initiated work of Greater Auckland, née Auckland Transport Blog, and if it is effectively rolled out this should be considered one of the most extraordinary achievements in New Zealand media history.

The two locations chosen by our major parties were both prosaic – the start-points of the key pieces of work being announced – and symbolically powerful. Labour, despite its new leader having twice failed to win Auckland Central, is intent on owning the urban liberal vote which had been drifting Greenwards, while also making a play as being the party ready to fix some of the city’s most pernicious problems.

That the policy received a cautious endorsement from the Chamber of Commerce’s Michael Barnett speaks to the extent to which big business is increasingly buying into the need for major work.

National’s choice of Papakura was no less instructive. It’s Judith Collins’ electorate – she and Nick Smith were there and beaming – a land of light industry, small businesses, wide streets and well-kept gardens. Apart from a lonely year when John Robertson defected to United Future, it’s never not been National.

I had planned to take the train out but, in some kind of neat irony, the Southern line wasn’t running this weekend. Driving out was a joy though, on a busy but free-flowing Southern Motorway. On arrival there were few pedestrians around, but all seemed to be draining to the train station, a location which would, until relatively recently, have been an absurd choice for National. Now though, despite manifest reluctance and general ideological resistance, they have come around further than they’re often given credit. This government is billions deep into funding Auckland rail, first through electrification and then through the CRL, and growing to be more comfortable striding onto this kind of a literal platform.

The crowd was larger and more diverse than I had anticipated, with a clear majority of Chinese and Indian New Zealanders. Most striking was the number of blue t-shirts, on toddlers, grandparents and a lot of teens and twenty-somethings. All bore the familiar National party N logo; many the much less familiar name ‘Blue Dragons’. They’re “a group of New Zealand National Party supporters who represent a strong voice for New Zealanders of Chinese descent in Bill English’s National Party.” They represented the biggest and most visible bloc of the crowd.

Alongside Newshub, ZB and TVNZ were a camera crew from The Indian Weekender – who have been covering the election vigorously, and identified violent crime as a critical issue – and the party’s New Lynn candidate Paulo Garcia, of Filipino descent.  The interest suggests National is making a concerted and – based on this turnout at least – successful effort to engage with some of the communities which Danyl McLauchlan identified as being a larger part of the ‘missing million’ than has been previously assumed.

Earlier English had talked about a “building boom the likes of which New Zealand has never experienced”, saying that there will be 200,000 homes built over the next six years – the equivalent, he said, of making Hamilton and Dunedin twice over. (Whether that is actually going to happen remains to be seen, as senior bank figures are beginning to balk at wearing the funding-side risk, and the gap between consents issued and dwellings built remains high).

It was a short speech which contrasted National’s plan to get building housing and infrastructure – which English said would employ half a million – with Labour’s attitude toward immigration: “our political opponents seem to think the best thing to do is to slow growth down”. It is likely this is how National will deal with Jacinda mania in the short term – by refusing to say her name, instead emphasising the gap between their growth agenda and Labour’s “breather” on immigration.

Bridges listed off a fairly mundane (by comparison to a giant light rail network) collection of local projects: new platforms and park and ride facilities, totalling out at about a tenth of what Labour had committed to public transport across town. And while he was at pains to point out that National had also funded the CRL (grudgingly sure, but still), the crowd’s response was more polite and dutiful applause than genuine enthusiasm. Tellingly, while they were here to announce rail upgrades, the biggest cheer came for a reference to the nearby Mill Rd highway. In less than 20 minutes it was over, Bridges and English were subsumed into a media scrum and the crowd began to disperse. There was no ‘come have a beer with me‘, that’s for sure.

Afterwards I rejoined the Southern motorway, this time heading north, and was immediately struck in bumper to bumper traffic late on a Sunday afternoon. A sign read ‘more lanes end 2018’, and you got a sense of what living with this gridlock day in, day out must feel like.

While rail to the airport gets the inner city suburbs excited, and reads like the future, out here it’s easy to see why it’s not just the roading lobby which wants new roads. And while public transport use is surging – to the point where the Employers and Manufacturers Association’s Kim Campbell was approvingly quoting the 20% rise in train journeys so far this year on The AM Show this week – for vast numbers of people a single occupant car remains their dominant transport mode.

For those near train routes and engaged with the research around road usage, projections about driverless cars and with proximity to the apartment boom, the argument about funding the likes of a second Southern highway or the East West link feel like an absurd anachronism. But for those sat in traffic day after day, new roads promise more time at home and less hours spent frustrated behind a wheel. Which is likely why National continue to find money to spend on them, and they remain a potent electoral weapon.