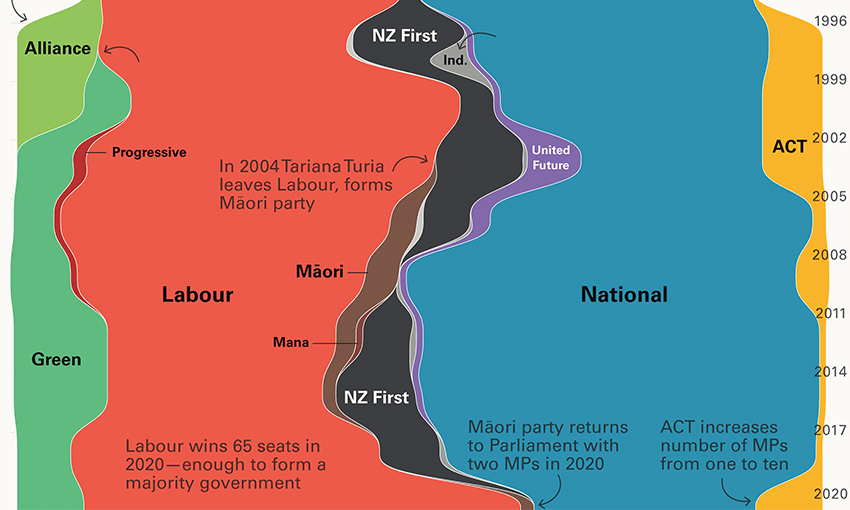 A visual history of the New Zealand parliament – 2020 edition

Three years after its debut, Chris McDowall releases an updated version of his epic graph view of our national political history.

Prior to the 2017 general election, I worked with Tim Denee to create a graphical history of New Zealand’s parliaments. It was an attempt to map parliamentary representation back to the first election in 1853.

Last week I wondered how the results of the 2020 election fit into broader parliamentary history. I extended the graphic to include the last few years of election and by-election data.

In the graphic, time starts in the year 1853 and advances down the page. Blocks of colour represent political parties. The wider a block, the more MPs the party had in parliament at that time. Below is a detail from the full graphic, showing changes over the last 20 years.

The 2020 results appear at the bottom of the graphic. Note how the red portion expands. This represents Labour winning 65 of Parliament’s 120 seats. This is the first time any party has won enough seats to form a majority government since the adoption of MMP in 1996.

The Green Party also won more seats, going from eight MPs to 10. Labour and the Greens have entered a “cooperation agreement”. Under this arrangement, the Green Party co-leaders hold ministerial portfolios outside of Cabinet and Labour consults on “areas of cooperation on climate, environment and child and community wellbeing issues”.

The Māori Party was not part of the 2017–2020 parliament. In 2020 Rawiri Waititi won the Waiariki electorate. The party gained a large enough share of the popular vote for co-leader Debbie Ngarewa-Packer to join Waititi in parliament as a list MP.

Since 2011, the Epsom electorate has kept a single Act MP in parliament. This year Act increased its share of the popular vote to 7.6%, ensuring that nine list MPs join David Seymour in parliament. Winning 10 seats is Act’s best result in an election, surpassing nine seats won in 1999 and 2002.

When something expands in a closed system, something else contracts. In 2020, two parties that had been in parliament lost votes. National recorded its second-worst result ever, dropping from 56 to 33 seats. New Zealand First received just 1% of the popular vote and lost all nine of its MPs. New Zealand First has left parliament once before in its history, following the 2008 general election.

Read on after the graphic for a brief account of the early years of New Zealand’s Parliament.

In parliament’s early years, political parties were local organisations rather than national bodies. Until the late 19th century, there were no political parties as we would recognise today. Members formed factions, but arrangements were loose.

The establishment of the Liberal Party in 1891 signalled the start of party politics. Over several decades parties formed, evolved, merged and disappeared. The oppositional conservative factions became the Reform Party. Labour and Social Democrat parties were founded, then merged into the modern Labour Party. In 1927 Liberal became the United Party. United formed a governing coalition in 1931 with Reform, before merging into the modern National Party in 1936.

Then things stabilised. For over half a century the National and Labour parties dominated the nation’s politics. Social Credit got an MP elected in the late 1960s and another two in the late 1970s. Otherwise it was a two-horse race. This started to change when Jim Anderton split from Labour in 1989, creating NewLabour. In 1993 the Alliance and New Zealand First each got two members elected to parliament.

New Zealand switched from first-past-the-post voting to a mixed-member proportional system in 1996. The political landscape became far more fluid. Eight small political parties gained parliamentary representation alongside the two major players. As the smaller parties got members into parliament, Labour and National could no longer hold enough seats to govern alone. This is an age of coalitions, diverse voices and shifting sands.

Thanks to Philip Lyth and Keitha Booth for providing feedback on the original drafts of this diagram. All mistakes are my own.