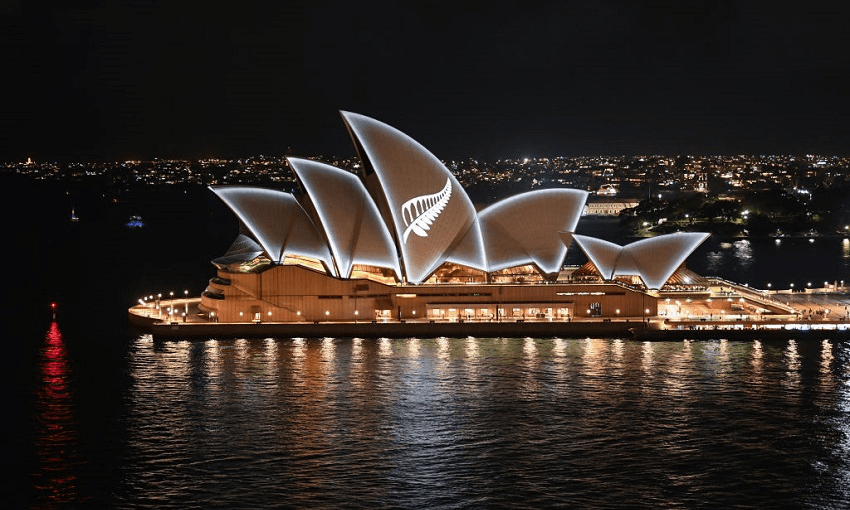 A silver fern is projected onto the sails of the Opera House following the Christchurch attack (Photo: James D. Morgan/Getty Images)

A silver fern is projected onto the sails of the Opera House following the Christchurch attack (Photo: James D. Morgan/Getty Images)

The shadow minister for multicultural affairs has made a statement to the Australian parliament calling for reflection and action on the Christchurch mosque attack.

Andrew Giles, the opposition spokesperson for multicultural affairs in Australia, has called on his compatriots to take heed of the Royal Commission into the Christchurch mosque terror attack that was released today. In a statement to parliament in Canberra this afternoon, he said his compatriots needed to acknowledge the terrorist was an Australian, and take action of their own.

The terrorist, who was sentenced to life without the possibility of parole in August on 92 counts of terrorism, murder and attempted murder, moved from Australia to New Zealand in 2017. The report describes the man who committed the atrocity in the following terms: “The individual is a white Australian male who was 28 years old in March 2019. He displayed racist behaviour from a young age. His life experiences appear to have fuelled resentment and he became radicalised, forming extreme right-wing views about people he considered a threat. Eventually, he mobilised to violence.”

In the statement, provided to The Spinoff by Giles, he said: “A short time ago, New Zealand Prime Minister Jacinda Ardern released the findings of the Royal Commission into Terrorist Attacks on Christchurch Mosques. Prime Minister Ardern delivered an apology to all those affected and recognised that an apology isn’t enough, by committing to implement all 44 recommendations. Australia too, must do more than offer condolences. We must recognise that an Australian terrorist committed these atrocities – an Australian that was radicalised here on our soil.”

He added: “In this place, we are charged with keeping all Australians safe. It pains me to read in the report that Muslim New Zealanders felt unsafe prior to the murders. We must recognise that Australia is not immune to terrorist attacks from home grown right-wing-extremists. This must be a call to action. To say no to hate, and to recognise the grave threat posed by right-wing extremism. The report also finds and I quote: ‘Efforts to build social cohesion, inclusion and diversity can contribute to preventing or countering extremism. And that “having a society that is cohesive, inclusive and embraces diversity is a good in itself”.’ Powerful words that we in Australia must also reflect on and commit to.”

Writing today for The Spinoff, Anjum Rahman, a leading voice within the New Zealand Muslim community, noted that the terms of reference for the Royal Commission “constrained the commissioners so that they were unable to look beyond the New Zealand government. The terrorist grew up in Australia, that is where he formed his thinking and that is the society that shaped him. It is incumbent on the Australian government to conduct its own inquiry into what could and should have been done to ensure he had the kind of support that might have arrested his path to radicalisation and terrorism.”

Speaking to media earlier today, Jacinda Ardern said she would raise the report’s findings with her counterpart over the Tasman, Scott Morrison. “I certainly will point Prime Minister Morrison to the elements in the report that cover their system. And I have no doubt that our agencies will have information to share as well,” she said.