Authenticity matters more than anything, writes Rosemary Williamson of the University of New England, an expert on leaders’ differing responses to catastrophic events.

Prime Minister Scott Morrison has been harshly criticised for being on holiday in Hawaii as the catastrophic bushfires were burning Australia.

Since his return, he has visited stricken communities – most recently, on Kangaroo Island. He has acknowledged the emotional toll on victims and promised practical support.

But the criticism continues. Every detail of the prime minister’s performance is being scrutinised via the 24/7 news cycle and social media. There is plenty of scope for perceived missteps, and little tolerance of them.

Disaster of any kind throws qualities of leadership – or the perceived lack thereof – under the spotlight. By what criteria, then, do we evaluate a leader’s performance at such times? What do we look for? 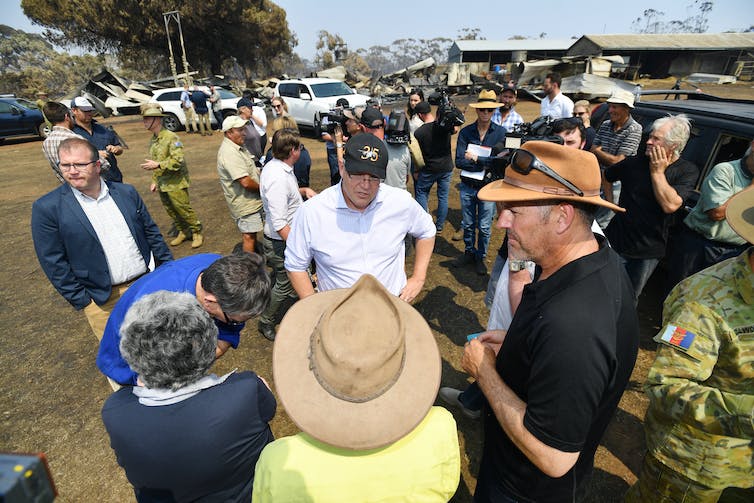 Criticised for being out of touch, Scott Morrison made a visit to Kangaroo Island to tour the fire damage and meet with locals. David Mariuz/AAP

How Jacinda Ardern got it right

These are questions that have guided my research on how prime ministers have historically connected with Australians during times of peril.

During crises, people expect two things, broadly speaking. One is practical information, advice and support to minimise the risk faced by those directly impacted. The other is “humanistic communication” – or, the ability to offer comfort.

Last March, New Zealand Prime Minister Jacinda Ardern showed both of these qualities in her decisive response to the massacre of 51 people at two mosques in Christchurch.

She immediately provided detailed information and promised aid and tighter gun control measures. And she unambiguously aligned all New Zealanders with the Muslim community by what she said – “They are us” – and by standing with community leaders and comforting those in distress.

Importantly, Ardern also wore a headscarf when meeting the families of victims. This was seen as a strong and culturally sensitive statement of solidarity and support – a mark of good political leadership.

Being on the ground to see themselves

Australian leaders have long shown strength in times of need, but the way they do so has changed over time. Today, there’s much more emphasis on being visible.

Following the Black Sunday bushfires in Victoria in 1926, for example, The Age printed a speech by Prime Minister Stanley Bruce in which he promised federal government aid and praised the heroism and altruism of Australians.

When the Black Friday fires devastated the state 13 years later, The Age quoted an “appalled” Prime Minister Joseph Lyons, who promised aid and expressed his “heartfelt sympathy” to victims.

But nothing was said in the newspapers back then about either prime minister interacting directly with victims.

A leader wouldn’t get away with that these days. Since televisions became ubiquitous in people’s homes, it’s become necessary for leaders to be on the ground following a disaster, surveying damage and consoling victims.

Prime Minister Harry Holt, a savvy user of the media in the early years of television, travelled to Tasmania in the aftermath of the Black Tuesday fires in 1967. Holt said he had to go to see for himself, to better understand people’s experience and needs. A detailed study of the 1967 bushfire response notes that Holt’s visit, while short, “caught the imagination” of journalists, who reported his reaction to the devastation in vivid detail.

This is what we now expect. Visits to disaster sites have become rituals vital to crisis management and a fixture of disaster reporting.

For a prime minister, such visits are also a chance to express those inherent qualities of “Australianness” that guarantee a full recovery. Everything that is said and done matters, which is why small details are heavily scrutinised.

People do not expect to be held at arm’s length on these occasions. Expressions of empathy are often reinforced by physical contact, even hugs.

Prime Minister Kevin Rudd demonstrated this following fires in Victoria in 2009, as did John Howard in the wake of the fires that swept through Canberra in 2003. They shook hands, patted backs and embraced survivors and emergency service workers.

Others have got it completely wrong. Among his many missteps in his response to Hurricane Katrina, President George W Bush delayed returning to Washington from his vacation by two whole days. An image of him surveying the damage from Air Force One then backfired – a decision Bush later called a “huge mistake”.

When Hurricane Harvey devastated Texas in 2017, President Donald Trump was likewise criticised for paying too little attention to victims when he toured the site. And after the Grenfell Tower fire in London, UK Prime Minister Theresa May admitted that not meeting residents on her first visit was a mistake.

Misjudging what type of response is welcome from a leader also risks being seen as symptomatic of poor leadership, of being out of touch with the people. As we saw recently with Morrison, not everybody appreciates a handshake.

Even what a leader wears may be important. First Lady Melania Trump, for instance, was widely mocked for wearing stiletto heels to tour the Harvey devastation.

And when Prime Minister Julia Gillard went to Queensland in early 2011 following extensive flooding and held a press conference with Premier Anna Bligh, some commentators focused on the differences in their attire. Gillard, with her tidy suit, was criticised for not striking the right note. Bligh’s more casual appearance, meanwhile, had the look of someone more in touch with the suffering of the people.

Earlier this year, Morrison was also faulted for wearing a military camouflage jacket when touring a north Queensland flood zone, with some saying he was “hamming it up” for the cameras.

Authenticity matters more than anything

The reactions to Morrison’s handling of the bushfires shows how important these qualities are in our presidents and prime ministers and how they will continue to influence perceptions of leadership in times of crisis.

Just as every leader is different, every disaster also requires a distinct approach. Each demands quick and sensitive judgements about what’s appropriate for the occasion. Reaction to any perceived errors of judgement will be swift and will spread quickly.

Above all, we look for authenticity in these moments, rather than obviously scripted photo opportunities. And in times of crisis, we’re more attuned to those out-of-touch moments when authenticity seems to be lacking.

The Sunday Essay: Cricket with child

All your questions about the Australian travel bubble, answered