Summer reissue: Some observers are questioning whether there are sufficient Facebook livestreams to support the goal, writes chief caring correspondent Danyl Mclauchlan.

Jacinda Ardern has responded to a surge in house prices, concerns about carbon emissions and calls for action on child poverty by pledging to care more about these issues. The pledge comes after a week of harsh criticism and opposition attacks, and in response to them Ardern has promised to drastically raise the already high levels at which she cares.

The move has delighted her supporters and international admirers, with US vice-president-elect Kamala Harris liking Ardern’s announcement on Instagram, while calls for the prime minister to receive a Nobel Peace Prize have intensified. But critics and commentators have raised doubts about the new caring, wondering whether the promised new levels of care are credible, and even questioning whether the government should solve problems in addition to caring about them.

Details about the increased caring are yet to be revealed but experts predict it will be in line with the prime minister’s previous track record of looking thoughtful and sad whenever questioned about an issue in front of media, and will consist of furrowed brows, worried frowns, and empathic nodding. The furrowing, frowning and nodding, which Treasury refers to as F2N, will increase by one percentage point a year, aggregating each year to an astonishing 9% increase in Net Prime Ministerial Caring, or NPMC, by the end of the decade. 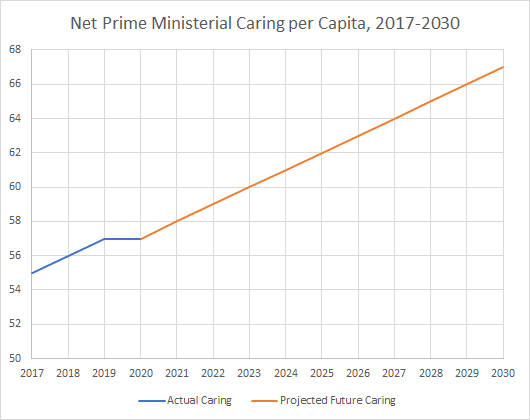 Some economists and political commentators question whether these levels of care are sustainable, predicting that Ardern will risk straining her neck and run out of adorable children to do Facebook livestreams with long before she reaches her new goals, while others have suggested Ardern’s majority government should do actual things to reduce house prices and carbon emissions and improve the lives of children, a suggestion Ardern has dismissed as anti-caring.

‘This will be the kind and compassionate caring that New Zealanders expect from their government,” a statement from Ardern’s office read. “As prime minister for all New Zealanders I will put caring at the heart of everything I do. I make no apologies for that.”

In her post-cabinet press conference, the prime minister would not be drawn on whether she would care passionately about child poverty but deeply about climate change, or the reverse. The adverb she would use to care about housing affordability was still being decided. “Intensely” and “strongly” are rumoured to be options and Ardern refused to rule them out, declaring, “I’m leaving every option on the table. I will choose a word ending in ly. That is my commitment to you.”

Further details about the caring will be determined by a task force, and the State Services Commission has formed a working group to determine the terms of enquiry for the interdepartmental agency that will establish the task force.

Ardern would not be drawn on whether climate, housing and child poverty were challenges, crises or disasters, and in response to questions about their priorities she explained that each of them was her highest priority. “Let me be clear. Child poverty is the reason I became a politician. And climate is the greatest problem facing the world, while housing touches every whānau. So in answer to the question of which I care about more, my answer is: be kind to one other.”

Doomed National Party leader Judith Collins has criticised the announcement. “The prime minister keeps telling us she’ll care more,” Collins said. “But the number of times this year she’s turned the corners of her mouth down and moved her eyebrows closer together has actually declined. New Zealanders need to ask themselves who they trust to care about things but not do anything. Jacinda Ardern or the National Party?’

The prime minister responded to Collins’ comments with peals of laughter, followed by a little sighing sound and the drying of her eyes. Details of the Caring in Aotearoa Now Taskforce 2030 are expected to be announced by late 2029, although Beehive sources are already warning of significant delays.