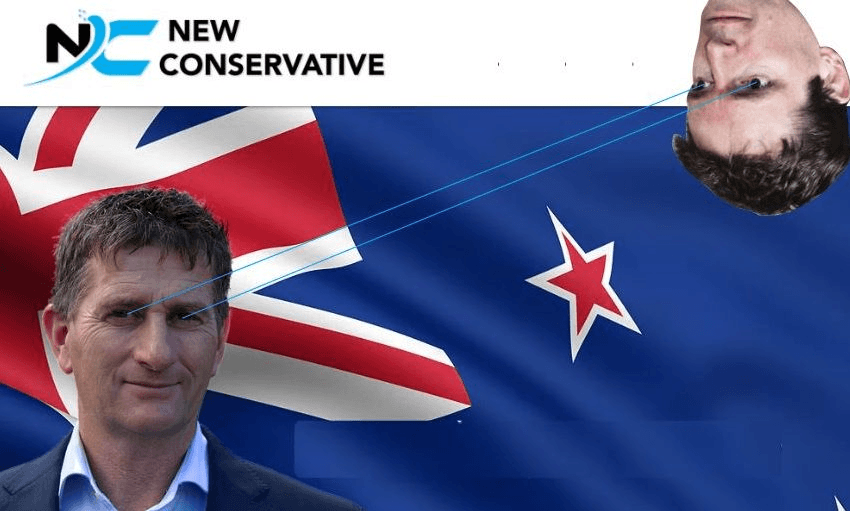 Life after Colin: Can the rebranded Conservatives rescue the NZ right?

They might have rebranded, they want us to know they’ve changed. And yet the party now known as New Conservative say they have the same values as when they were just the Conservatives. Is there any chance they’ll be taken seriously?

In parts of New Zealand social liberalism has seemed to be on an inevitable march. There was the cross-party consensus upholding the anti-smacking bill, despite a one sided referendum against it. Marriage equality passed, again with reasonably wide cross-party support. Upcoming referendums and conscience votes on decriminalising abortion and euthanasia look promising for progressives. The new government’s attitudes towards drugs and crime are starkly different to the last lot. And with all of those issues that have gone through, the sky clearly hasn’t fallen, despite the dire warnings.

Leighton Baker, leader of the Conservative Party turned leader of the New Conservative Party, as relaunched this week, doesn’t want a bar of it. And he rejects the suggestion that their alternative, with its edict on how adults should live their lives, what choices they make, who they love, amounts to social authoritarianism. Rather than being authoritarian, says Baker, he wants “the people” to have choices instead of “the politicians”. The party wants binding referendums on everything that currently becomes a conscience vote in parliament – it’s clear many in the party are still driven by the grievance of having their anti-smacking referendum ignored.

But what if there was a binding referendum on, say, decriminalising abortion, and they lost? And doesn’t that bind public policy to majority rule? “There’s some things we like, and some things we don’t, and it comes down to whether we want to live in a real democracy,” says Baker. “If we have a democracy that only support what I want, that’s not a democracy, that’s an elected dictatorship.” The logic is simple and seductive, but as the experience of Britain after the Brexit referendum shows, such votes can have wildly damaging and unexpected outcomes. And the 48% tend to absolutely hate having decisions forced on them by the 52%.

At the heart of New Conservative’s world view is nuclear, heteronormative families. “We’re not a party that’s making a whole lot of stuff up,” says Baker. “What we’re looking at at the moment is a lot of marriage breakdown, and when we see marriage breakdown the statistics directly rate to imprisonment, abuse, poverty. Surely, wisdom would say, why don’t we strengthen marriages?” One of the aspects of their families policy is state funding pre-marriage training – which would be “highly encouraged,” as well as state sponsored counselling for couples experiencing marital problems. It’s telling that on their new website, four of the five-man party leadership team mention being married in their bio.

It’s also telling how firmly the rebrand is about ditching the baggage left behind by the guy who led them into the 2014 election – their best ever result. In the press release announcing the new name, Baker pointedly concludes that the rebrand is about “allowing us to disconnect from a history that has nothing to do with who we are”.

The events surrounding Colin Craig, the implosion of his political career, and collapse in moral standing among conservative people have been litigated endlessly – quite literally, for that matter. When Colin Craig tried to resurrect his political career and launch legal action against Jordan Williams, wife Helen Craig was at his side, an implicit nod to the political value of marriage in conservative circles.

Baker is insistent that Craig has no role whatsoever in the party any more. Not as a public face, not as a backroom fixer, not even as a financial backer. The last leader “destroyed where the party was heading”, reckons Baker. It doesn’t seem like he’ll be welcomed back.

Baker says the party is feeling buoyant at the moment. But – why? Between the 2014 and 2017 elections, the party lost close to 95% of their voters. They’ve still got more than the 500 members needed to stand for the party vote (it’s unclear exactly how many) but Baker says they need to rebuild across the country to be a genuine electoral force. He says there are reasonable teams in Christchurch, where he lives, and Auckland, but that there was a big membership drop in the wake of the post-2014 debacle.

So where did those members go? Some, according to Baker, have gone to National, to try and influence a party with rock solid electoral prospects. The ones who stayed felt there was “a void for a Conservative voice”, says Baker. They don’t want to share a party with relative liberals within National like top MPs Amy Adams and Nikki Kaye. Would they be happy sharing a party with conservatives like Judith Collins, Simeon Brown or Simon O’Connor? There weren’t any individuals Leighton Baker was keen to endorse. Given National have shown absolutely no interest in getting defined by social issues this term, it’s not hard to see why.

At some stage, though, New Conservative may have a choice. There have been rumours floating around about a right leaning MP splitting off from the mothership and starting a new conservative ally for National, or joining an existing party. That would then lead to the possibility of a coat-tailing deal to game the MMP system.

Just before the 2014 election, then-PM John Key ruled out doing any sort of seat deal with the Conservatives, which meant that despite getting almost 4% of the party vote, they had no path into parliament. Key seemingly didn’t rate Colin Craig, saying in June of that year in an interview with The Nation that he struggled to come up with one good thing Mr Craig had done that year. Besides, Key didn’t need an ally in 2014 like Simon Bridges might need an ally in 2020. In a recent interview with Breakfast, Bridges admitted he’s having conversations with people around the right of politics to see if they could work. Was the New Conservative Party one of those groups? Baker wouldn’t say.

Of course, an ally can’t just be magicked up out of thin air. For a party to develop a following, they need oxygen and attention. Since the messy departure of Colin Craig, the party has had literally none of it. Leighton Baker says he was interviewed once by a journalist at a major media outlet for the 2017 election (full disclosure, that journalist was me for Newstalk ZB). The interview took place on the 24th of September – the day after votes were counted. That sense of grievance at the media is clear in the party. Board member Fraser Calvert’s website bio says there is a “growing appreciation by him and many conservatives that we cannot trust the media any more and the liberal and academic bias fuelled by Hollywood shows how far we are removed from a sane society with common sense values.”

So why will 2020 be any different? The most likely outcome is that it won’t be – minor parties have historically found getting into parliament an almost insurmountable goal unless they already had an MP to build around. And parties in that space – Christian Heritage, the Kiwi Party, the Family Party – have never made it happen. But the ideas that drive the Conservative Party aren’t going to go away, regardless of what electoral vehicle they coalesce around. And given major unaddressed social issues could erupt between now and the next election, the rebrand may have been perfectly timed for the party to rise again.