Google has launched a new election trends hub, deciphering how New Zealanders are searching for parties, leaders and major topics ahead of October 17.

It’s been a long, hard six weeks since the “rogue” Newshub poll that gave Labour hope of governing alone after the October election.

Since then, we’ve had a second wave of new Covid-19 cases, a second lockdown, and a plethora of tempting election policies.

To tide us over until new polling, Google’s election trends portal lays out what New Zealanders are searching for ahead of next month’s election.

People are searching for National a lot more than Labour

Despite the most recent polling showing Labour leagues ahead of the opposition, Google searches for the National Party over the past week have almost doubled those for Labour.

Of searches for New Zealand political parties represented in our most recent parliament, 32% have been for National, 20% for Act, 17% for both Labour and New Zealand First, and 14% for the Greens.

Leaked internal polling by UMR (which also runs polling for Labour) this week looks nothing like these Google trends. That polling has Labour well up on 52%, with National on 29% and the Greens out of parliament on just 3.2%.

Despite the high number of searches for the National Party, Google data shows Jacinda Ardern is consistently topping the list of most searched political leaders. Over the past week, 54% of searches for political party leaders in New Zealand have been for Ardern, versus just 19% for Judith Collins.

Possibly boosted by his time in the news defending and then apologising for the Green School funding shambles, James Shaw is matching David Seymour on 5% while Marama Davidson is on just 1%.

Data also shows that the Bay of Plenty is the region with the highest searches for Ardern. That’s unlikely to be a coincidence: Ardern has been on the campaign trail in the area, making announcements in both Tauranga and Whakatāne.

It really is the Covid election

Jacinda Ardern previously said that this election would be dominated by Covid-19 – and Google trends appear to back that claim up.

“Coronavirus” has consistently been the most-searched political topic over the past week, briefly overtaken by “tax” yesterday – the same day Labour released its policy. 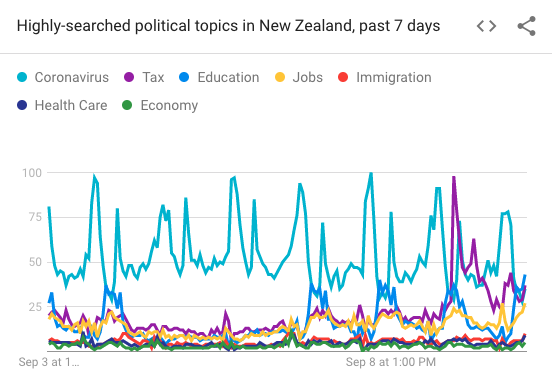 Other than Covid-19, the most common topics have consistently been tax and education.

Google also differentiates between political “topics” and political “issues” – the latter of which are more specific terms. The top trending election issue in recent days has been “jobs”, likely owing to the renewed risk of business closures due to Covid-19. In good news for the National Party, “roads” is number two, followed by tax, cannabis, lockdown and the wage subsidy.

While cannabis is in the top five searches, the other referendum topic – euthanasia – is ranked at number 11, next to climate change at 10. 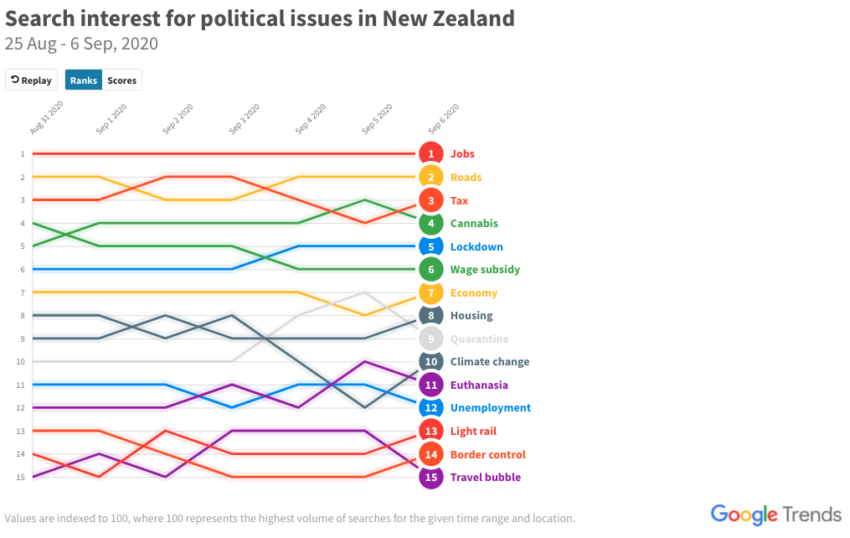 The Greens are going very hard on Google advertising

Just a nudge more than $87,000 has been spent on political ads on Google since May 18, of which more than half was by just two parties. The Greens spent $33,000 on political ads during this time, and Act spent just under $24,000. Labour is nowhere to be seen on the list, and National spent a mere $600 on one Google ad.

Sustainable New Zealand, the party led by Vernon Tava that has been almost entirely absent from any election discussion whatsoever, has spent $6000.

The rest of the money is divided mainly between ad campaigns for the cannabis and euthanasia referendums, with the Drug Foundation spending over $13,000 and Yes for Compassion dishing out $7,800.

That Winston Peters Q&A interview might have done some good

By now, almost everyone seems to know about that interview Winston Peters gave over the weekend on TVNZ’s Q&A. While on the one hand it may have made Peters look forgetful and downright angry, Google trends seem to back up the old mantra that any exposure is good exposure.

Searches for Winston Peters spiked on Sunday morning, shortly after the interview went to air.

Google trends also show that almost all searches for Winston Peters were accompanied by searches relating to Q&A or Jack Tame.

Greens co-leader Marama Davidson experienced a similar level of notoriety over the weekend, albeit for a very different reason. According to Google’s reporting of its data, the number one related query after searching for Davidson this week has been “wap”.

Her counterpart James Shaw was less fortunate, with people asking: “why was Green Party co-leader James Shaw in the news a lot last week?”