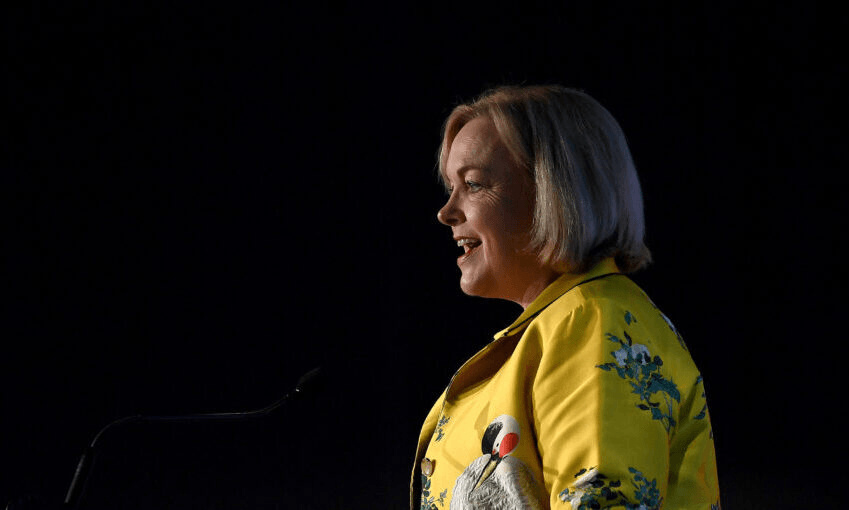 Judith Collins on the campaign. (Photo by Hannah Peters/Getty Images)

Judith Collins is the ultimate political survivor. Write her off at your peril

By Jennifer Curtin
Guest writer
Made possible by

Judith Collins on the campaign. (Photo by Hannah Peters/Getty Images)

She is rebuilding National’s support and is determined her political career as leader will not end on October 18, writes Jennifer Curtin

I first met Judith Collins in a media green room somewhere in Auckland midway through 2015. She is renowned for her ambition and dogged determination. But meeting her in person, I found her engaging, funny and very direct.

She is also from my own home province, Waikato, which has a long history of producing influential political women (Dorothy Jelicich, Marilyn Waring, Margaret Wilson, Helen Clark and Jacinda Ardern, to name just a few). When she heard I taught a first-year politics class she volunteered immediately to come and give a lecture.

I took her up on that in October the same year, and she proved to be an entertaining guest. She shared with her audience of 300-plus her views on National as a party of pragmatism rather than ideology, and why any media attention is better than none. She was asked about her leadership ambitions — and was diplomatically coy.

By then, Collins had been exonerated by a government inquiry into allegations that she had sought to undermine the director of the Serious Fraud Office.

She returned to cabinet, but it was a period of her political life she refers to in her recent memoir as the “whole awful Worst of Times”. After six years as a high-profile minister of police, corrections, veterans affairs, justice, ACC and ethnic affairs, all the while in pursuit of an economic portfolio, Collins had been forced to resign from the front bench three weeks out from the 2014 election.

Until that point she had been touted as one of those most likely to succeed John Key. While it would take six more years before Collins won the leadership of the National Party, she never gave up. The subtitle of her book sums it up: Memoir of a Political Survivor.

Collins has put her name forward for the leadership several times since Key’s resignation, but could never win over enough caucus colleagues. This year was different. Todd Muller’s unexpected resignation as National leader just 53 days after his own coup against Simon Bridges presented Collins with a wide open window of opportunity to finally take charge.

National may have been turned to her in desperation, but several pundits have since argued she should have been made leader much earlier.

Collins was first elected to parliament in 2002, the year of National’s nadir — the party received just 21% of the vote, resulting in a net loss of 12 seats. Its support had fragmented — centre-right voters had shifted to ACT, New Zealand First and United Future. With Helen Clark’s Labour Party at a 41% high, Collins was one of only five new National MPs to enter the 47th parliament.

Two of those five new MPs were Don Brash and John Key, who both went on to become National Party leaders ahead of Collins. Unsurprisingly, both were influential in her career, albeit in opposite ways.

Collins recounts Brash’s political style and intellect with warmth and respect. Brash holds a PhD in economics from the Australian National University, has worked for the World Bank, and was New Zealand’s Reserve Bank governor for 14 years from 1988 — overlapping with the ascendancy of neoliberalism in New Zealand.

As leader of the National Party, it was clear Brash supported Collins’s aspirations, giving her portfolios that matched her expertise. He even invited her to a dinner with Milton Friedman, at which she learnt the political leader the famous economist most admired was Margaret Thatcher.

Collins praised Brash’s Orewa speech, in which he had condemned the “dangerous drift towards racial separatism” and the “entrenched Treaty grievance industry”. Divisive in the eyes of many, Collins saw it as an example of the decisive leadership that ultimately led to Brash bringing National voters “home” in 2005.

National didn’t win, but increased its presence in parliament by 21 MPs (48 compared to Labour’s 50), with ACT, NZ First and United Future losing 18 seats between them.

By contrast, the relationship between Collins and Key appears to have been less than rewarding. She argues Key had come into politics with a very clear agenda of being prime minister and nothing would get in his way.

One political reporter had tipped Collins as most likely to be Key’s deputy in advance of the 2008 election, but this did not happen. Nor was she promoted in Key’s first cabinet.

Describing the annus horribilis that was 2014 in her memoir, it is evident she felt let down by Key’s lack of support in quelling the Oravida and “dirty politics” controversies that year.

More broadly, Key’s political strategy sat at odds with Collins’s political intuition. In 2008, he was intent on pulling the party more towards the centre, but Collins was sceptical of the argument that winning elections meant winning over median voters.

Citing the success of Thatcher, she believed shoring up the base and delivering to that base mattered more. For Collins, centrism is an excuse to do nothing and stand for nothing.

Winning back the base

It came as no surprise that Collins titled her memoir Pull No Punches. Her style during the 2020 election campaign has reflected the pleasure she gets from flexing her parliamentary debating skills, which she says “requires quick wit […] an ability to think on one’s feet”.

She was rewarded with positive verdicts after the first two televised leaders’ debates, where her retorts and interjections were sometimes fierce, other times flippant. She clearly enjoys being in charge and unrestrained by broader collective responsibility (a point she also made about her time as a newspaper columnist during her sojourn on the backbench).

Her formative political years reveal that decisiveness in a leader is a quality she values, even if it offends. She is probably further to the right than some in National might prefer, but in this she has not wavered over time. Her maiden speech and her memoir demonstrate a disdain for what she calls the “lazy gene” and a welfare system that “funded women to have multiple children”.

In a sense, her political ethos is a mix of old-school pragmatic National conservatism and a dose of ideological neoliberalism.

She has never been shy about her desire to be a good electorate MP, to make a difference, to be in power and to climb to the top of the political ladder. The polls suggest Collins will succeed in winning back a chunk of the base that began to desert National with the onset of Covid-19. Attracting centre voters, however, may prove elusive.

That is unlikely to worry Collins. She is rebuilding National’s support and is determined her political career as leader will not end on October 18 2020. There are others, including touted future leader Christopher Luxon, who might disagree – ultimately the decision will not be hers. But it may be too soon to write her off. When Collins calls herself a political survivor, she means it.

Jennifer Curtin is a professor of politics and policy at Auckland University.