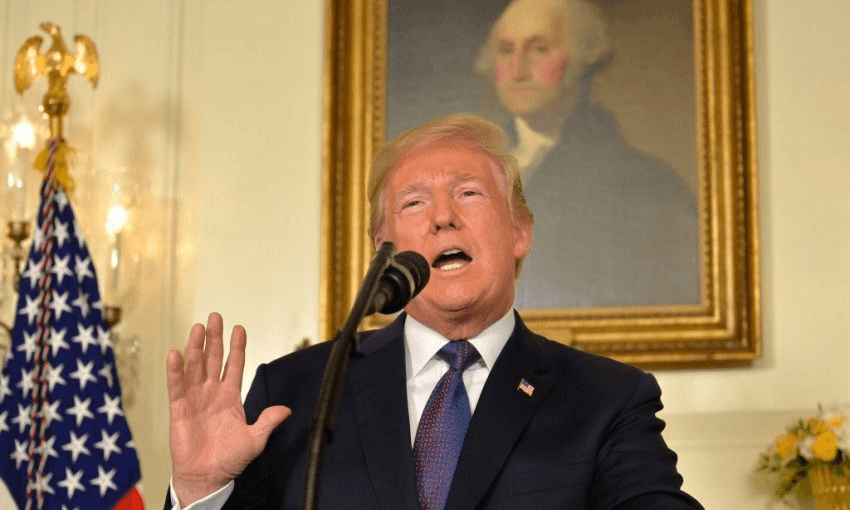 The campaign launched by the US with France and UK is a breach of international law. These bombs will kill and maim more people, bringing irrevocable suffering to an already traumatised people, writes Green MP Golriz Ghahraman

The harrowing reality of Syria’s war, with chemical weapons, a trapped civilian population and blocked UN security council, just got a whole lot more frightening. Today, the United States, under President Trump, together with its allies, France and the United Kingdom, entered another war in the Middle East. Of course the Syrian war has been a proxy war in the model of perpetual wars happening throughout that oil-rich region for some time.

The United States, Russia, and regional powers like Saudi Arabia and Iran have all been fanning those flames and literally providing the firepower. But it does make a difference when a superpower breaches international borders to bomb another nation, without even the pretense of lawful sanction. It matters because the rule of law matters, because might should not be right. But mostly, it matters because those bombs will kill and maim more people, they will bring more violence and irrevocable suffering to an already traumatised people. No one has ever in fact bombed for peace, we know that so why do it again?

The thing about watching the horrors of war in Syria is that we feel powerless but desperate to help. The population is trapped, much of the violence is actually being perpetrated by Syria’s own government and armed forces, but rebels and other ad hoc armed forces are also being backed by foreign powers interested in the regional power play, interested in promoting their own interests. It isn’t fair, because on the ground ordinary Syrians are caught in the cross-fire. Millions have lived in refugee camps for years now, ordinary children who once worried about birthday presents and homework have had no regular schooling well into their teens.

Some have lost their lives trying to reach safety. Chemical weapons have caused painful deaths and horrifying injuries to entire villages. It isn’t fair, and the deep outrage felt around the world each time Russia vetoes a Security Council resolution on something like investigations into those chemical attacks, we all feel defeated. That’s understandable. But what comes from that sense of anger and frustration cannot be blind vengeance at the expense of more lives lost.

If history has taught us anything, it is that violence doesn’t and hasn’t ever stopped violence, in that region or elsewhere. So it matters, and is telling to me, that everyone involved is well aware that strike action is almost certainly not going to make victims safe, stop the use of chemical weapons, or end the war. The airstrikes must be seen for what they are: a continuation of a policy that protects American and western interests and a breach of international law.

While the question of lawfulness may seem pedantic in the face of chemical warfare, the opposite, an acceptance of a “might is right” ad hoc approach to something as grave as the integrity of international borders and the use of force, is worth guarding against with vigilance. Leaving the US to do what it wants creates a precedent that we have to live with in future, at the whim of the Trumps in this world, with little respect for the rules and airstrike capability to match. New Zealand, as a small country that relies on multilateralism and the rule of law, needs to stand up against ad hoc unlawful international violence.

It was very telling that in Trump’s statement on air strikes he did not claim the attack was consistent with the UN Charter or was a legal response to the use of chemical weapons. He simply said that the attacks were in the national security of the United States. What he should have said was the attack served US economic interests. This war would not have been as bloody or long lived had it not been for the eager involvement of the US, Russia and their allies and for their unwillingness to pressure their regional allies, to divest from the cheap oil coming from either Iran or Saudi. We cannot say we’ve exhausted all diplomatic options, when the war being waged is literally itself a tool to secure other diplomatic and economic interests. If we were willing to forego those interests there would be no weapons or financial resource for this war.

My family has suffered under US sponsored bombs in my childhood. I’ve lost friends, lived terrified, and known teenagers drafted away into a war that would not have continued for eight long years had it not been for the western appetite to fight for its interests in the Middle East. That is important to remember as we are sold the moral authority of the US, UK and France here against Russia.

Given that we know bombing terrible regimes in the Middle East only creates or extends its wars these bombings only makes the people of Syria less safe. It is the perpetration of violence on behalf of those already at breaking point, wreaking more havoc and death just to feel like we’re doing “something”. We can’t let the end point, peace in Syria be obscured by the immediate need for us to feel better. We can’t accept a weakening of international law. This bombing is the end point of the venomous, divisive electioneering rhetoric that saw Trump win his presidency. It isn’t what New Zealand stands for.

Aotearoa is the land that gave my family and me safety and dignity when we arrived as refugees, because Kiwis stand for peace and for inclusion. What we should do is engage with the international community in ensuring the victims have access to aid, safe passage out of targeted areas, can settle as refugees without being accused of terrorism or banned from that safety by the likes of Trump. What New Zealand can do is never support any nation on the East/West divide who sponsors violence. We can, as we have always done, stand against violence, with ordinary people, sharing our values.