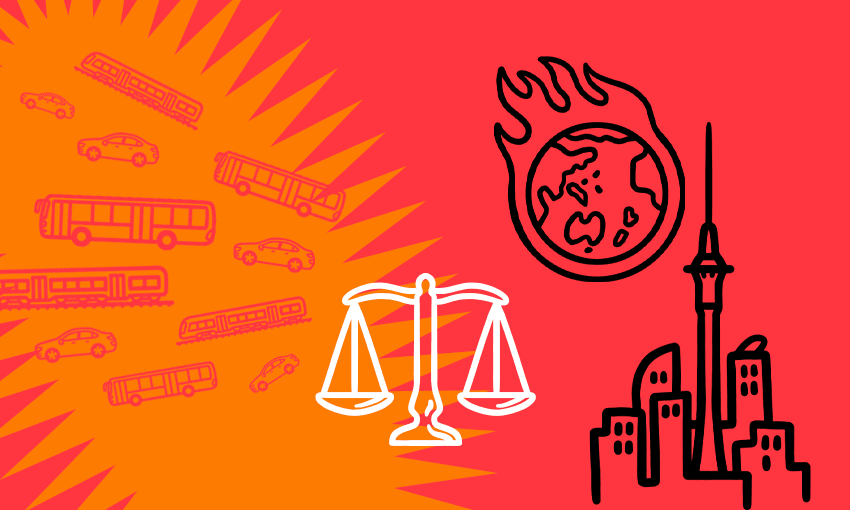 A collection of climate advocates recently sued the council and AT, accusing them of failing to comply with the council’s own climate plans. As Hayden Donnell explains, the judgment could have far-reaching implications.

In 2021, Auckland Transport, an Auckland Council-controlled organisation, approved a Regional Land Transport Plan (RLTP) that sets the funding for the projects that make up its work programme over the next deca- WAIT! DON’T GO! Anyway, the problem with the plan is that it will either raise carbon emissions from transport, or perhaps reduce them by 1% once government climate interventions are taken into account.

That may strike you as strange, given Auckland Council has declared a climate emergency, passed a targeted climate rate, and unanimously approved a climate plan, Te Tāruke-ā-Tāwhiri, which calls for a 64% drop in transport emissions. Those promises to do a lot about climate change appear to be in conflict with the RLTP’s promise to do almost nothing about climate change, and that’s concerning given transport accounts for 43.6% of Auckland’s emissions.

That does sound quite bad. Is something being done about it?

Auckland Transport is currently arguing it can’t make urgent changes to an obviously unsafe stretch of road where a teenager was killed because it would mean consulting businesses on removing some carparks. It has decided not to install air filters in its buses during an airborne global pandemic because it will cost too much, even as it endures staff shortages caused partly by drivers catching Covid. You think it’s going to change a massive transport plan just because it’s a climate disaster? Don’t make me laugh a mirthless laugh, dull with dread and heavy as an ancient tomb door closing.

Auckland Transport isn’t changing the RLTP any time soon, and Auckland Council – for all its talk about climate emergencies – simply waved the plan through. That left a collection of climate and transport advocates to challenge the plan in court under the moniker All Aboard Aotearoa. They accused the council of failing to meet its own climate obligations, and being in breach of government directives that call for reductions in vehicle travel and emissions.

The council won less because the RLTP is great for the climate, and more because it successfully argued it doesn’t have to be. In court, the council’s lawyers contended that Te Tāruke-ā-Tāwhiri is a “high-level” document that doesn’t oblige their client to “meet or support any specific emissions reduction target”. Declaring a climate emergency was also viewed more as an aspirational statement than as something councillors are required to meet with tangible action, with the council’s lawyers saying it has “no inherent statutory or legal implications”.

A government policy statement mandating a transition to a “low-carbon transport system” was similarly dismissed. The council claimed the policy was “minimally directive”, and its climate change targets had to be balanced against other priorities including improving freight corridors.

Justice Geoffrey Venning agreed with almost all the council’s arguments, saying there is “no legal requirement” for the RLTP to be consistent with Te Tāruke-ā-Tāwhiri, and climate is not a “pre-eminent” concern of the Government Policy Statement on Land Transport.

That’s disappointing for All Aboard Aotearoa’s supporters, but Venning’s judgment is even more conservative than many of them expected. It says the RLTP is not “significantly inconsistent” with the council’s climate plan given they both produce a reduction in emissions by 2031, which feels a bit like saying I’m not significantly inconsistent with Usain Bolt given we both have legs and can run 100 metres. The judgment also asserts that plans like the RLTP are “not climate change decisions as such”, which is quite surprising given the RLTP may have the single biggest impact on emissions of any plan the council passes in the next decade.

This is not only a problematic outcome for All Aboard Aotearoa, but arguably for Auckland Council as well. It may have won, but in doing so it set a precedent for its transport body disregarding the plans councillors approve. Meanwhile, other local authorities could look at this decision and decide they don’t need to make the government’s call for a transition to a “low-carbon transport system” such a priority. If these plans and statements don’t have to influence something like the most important transport plan in Auckland, some people might start to ask whether they’re worth the paper they’re written on.

That’s pretty concerning right now. It might be even more so after the local elections in a few months. At a recent mayoral debate in Takapuna, several Auckland mayoral candidates jostled for the title of “person who will do the least about climate change”. One of the leading Wellington mayoral candidates seems to experience vivid nightmares whenever he hears the word “cycleway”. In a hallowed three-yearly tradition, council wards across the country will soon be won by candidates upset at the prospect of making even a small effort to stop our oceans turning into a tepid soup.

The latest IPCC report gives us a few years to get off a path toward an “unliveable world”. It prescribes an urgent transition away from cars, and toward public transport, biking and walking. Almost every climate scientist in the world is saying we have to change everything immediately, if not several years ago. If anything, our councils need to be compelled to be more radical. The last thing they need is another legal excuse to sit back and watch the world burn, flood, overheat, freeze, and then burn again.