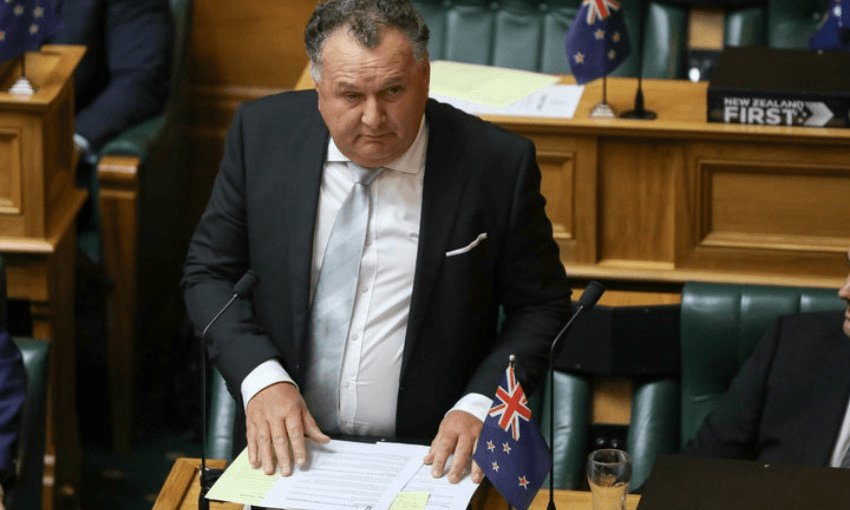 For many years NZ First’s Shane Jones was one of Labour’s most reliably pro-business MPs. Yet today he presents as an anti-corporate crusader. Branko Marcetic assesses his record and asks whether supporters should trust his dramatic conversion.

The metamorphosis of a butterfly is one of nature’s great miracles. A caterpillar, growing too big for its own skin, disappears into a cocoon, emerging some weeks later an entirely different creature.

As goes the humble caterpillar, so goes the humble politician. For proof of the wondrous transformation a political metamorphosis can yield, look no further than NZ First MP Shane Jones, who made a long career as a champion of big business before emerging from a three year diplomatic cocoon as an anti-corporate populist firebrand.

Jones most recently flexed his newfound populist muscles by assailing the banks, calling the Financial Markets Authority (FMA) too “chummy” with the people they’re meant to regulate, and demanding the banking sector pay a $100 million levy for their “extravagantly privileged position.” It’s the latest in what certainly seems like a concerted re-branding for Jones as a business-unfriendly economic populist.

“If corporate New Zealand is going to trot out these fluffy inanities about how good they are in terms of climate change and social license then expect to be called on it if you don’t practice what you preach,” Jones told Interest earlier this year, taking aim at “corporate bureaucrats.”

In September, Jones called himself an “enemy,” later correcting to “frenemy,” of Fonterra. He’s taken the Warehouse to task for nearly closing in Kaikohe, assailed Air New Zealand over price hikes, and accused Australian owned banks of gouging consumers in the regions. Media have in turn described these efforts as a “warpath against corporate New Zealand” and “the makings of a classic big business versus the little people fight,” outright labelling Jones a “populist” and broadcasting the complaints of business leaders frustrated with his rhetoric, fortifying his self-designed image as a “champion of the regions.”

It’s almost enough to make you forget that before he put on a “Make New Zealand Great Again” cap, Jones had spent virtually his entire political career as the champion of big business.

For the most part, Jones’ career has been defined by his closeness to the very thing he now claims as his enemy. As a Labour MP, Jones repeatedly sided with the interests of business over his own caucus, as when he vocally backed deep sea oil drilling by Anadarko at a time when, most notably, his environmental spokesperson and his party’s leader were both raising concerns about the project. His bid for Labour leadership was partly funded by NZ Oil and Gas board member Rodger Finlay, who Jones this year announced was chairing Jones’ Provincial Growth Fund. It’s worth noting that Jones still supports mining on conservation land.

In 2012 Jones virtually went to war with the Greens to defend industry. When the Greens put forward a bill to alter copyright law to enable the satirising of copyrighted work – such as, say, overdubbing a company’s TV commercial with their own message criticising that company – Jones was not swayed. Breaking from the rest of his party’s support, he charged it would empower “economic vandals” and would “lead to the destruction of jobs”. This was after Jones had called the Greenpeace parody of Sealord’s environmental record (which had prompted the bill) “treacherous,” a “re-run of colonialism” at “the bidding of [the Greens’] Pommie masters,” and a humiliation of “garden variety Kiwi toilers.”

Jones, of course, had been the chairman of Sealord once upon a time, under whose tenure half of the company had been sold to Japanese firm Nissui. Jones had talked up the deal at the time and its employment benefits, which didn’t really eventuate, all of which had made him a particularly eyebrow-raising choice to join NZ First in 2017 given the party’s crusading against foreign ownership of New Zealand.

His argument was that his defence of business was just him looking out for the ordinary, job-seeking Kiwi. Except while a Labour MP, Jones was cool on the living wage, making it unsurprising that he got only 12 percent of the union vote when he ran for Labour leader. He also staunchly opposed raising taxes on the rich, and voiced a resigned acceptance for the Key government’s privatisation programme. More recently, his work-for-the-dole scheme was criticised by unions and anti-poverty campaigners, but supported by the Employers and Manufacturers Association, a group that serves as the voice of corporate New Zealand and lobbies for pro-business policies.

It’s little wonder that, once an MP, Jones received donations worth $10,000 from both Sealord and Talley’s. In fact, the latter also bankrolled the new-and-improved populist Jones’ campaign in Whangarei for NZ First last year. Talley’s, besides lobbying for a relaxation in health and safety regulations while holding a troubling worker safety record, may be best known for the prolonged battle it waged against its meat workers, during which it illegally locked out employees in the middle of collective bargaining.

And while Jones played coy last year over his stance on the TPP, in 2013-14 he was regularly reported as part of the pro-TPP side of Labour. After he left the party, he worked for the National government to sell the agreement to Māori. The TPP was top of the wishlist of just about every major corporation in the world, often in opposition to large segments of the local populations of the proposed signatories – particularly over its clause allowing companies to take governments to court over law changes that affect their bottom line.

None of this should be particularly surprising. Jones has said multiple times that the Labour Party he fell in love with was specifically that of the Lange government, a.k.a. the pro-business, free market government that slashed regulations, sold off state assets and rolled back union power, and whose economic architect, Roger Douglas, went on to found the ACT Party. It had made his joining NZ First even more baffling, given that Winston Peters was explicitly campaigning against the very same Labour government that Jones most admired.

This isn’t the only side of Jones – every now and then he would make a big show of criticising corporate New Zealand for some policies, as when he repeatedly accused Countdown of anti-competitive practices. Yet it’s clear the weight of evidence suggests he belonged to a strongly pro-business wing of Labour, and that his current positioning jars strongly with his historical posture.

People are of course allowed to change their political stances – even politicians. But elected officials also have a habit of conveniently, and sometimes dramatically, shifting their beliefs at the most opportune times. Perhaps the show Jones is currently making of taking on corporate New Zealand isn’t just a canny piece of re-branding. Then again, his continued financial support from Talley’s suggests there’s at least one group of people betting that it is.