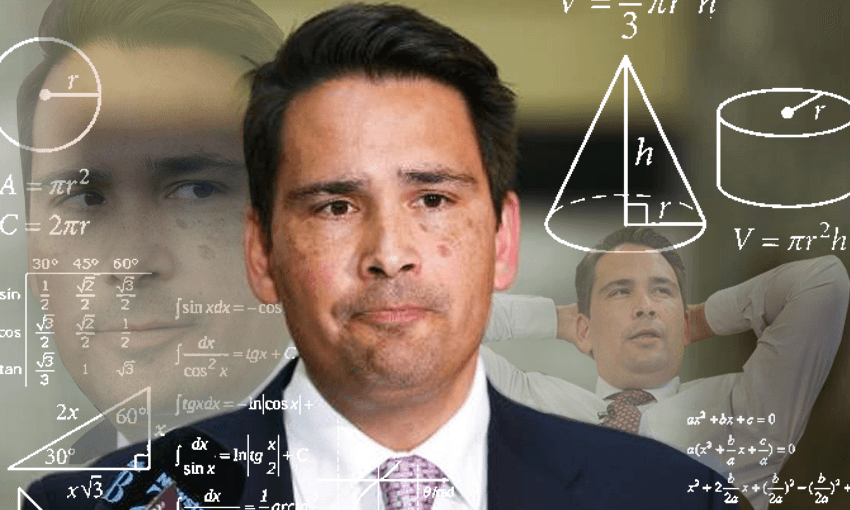 Simon Bridges reckons those on the average wage shouldn’t be hit by a 33-cents-in-the-dollar tax. And they’re not. Not even close. Alex Braae explains.

It takes an incredible political talent to announce that you disagree with a policy setting, and have that critique be so powerful that it retroactively becomes government policy.

National leader Simon Bridges had one of those moments today, in revealing parts of the party’s economic manifesto to take into the election. The exact tax cut plan hasn’t been made clear, but cutting income tax is certainly on the agenda.

Bridges said during the announcement that in a future announcement he “will announce our full tax plan that will see people on the average wage better off and keeping more of what they earn.” So let that be announced.

And then he declared: “People on the average wage shouldn’t be paying almost 33 per cent in the dollar.”

Incredibly, simply by making that point clear, he managed to travel back in time and reset the rates of marginal and effective tax rates, and fortunately for several years now nobody has had to pay anything like that level of tax.

Of course, this will already be widely known, but for the avoidance of doubt, here’s how our income tax system works. For the first $14,000 of income, the tax rate is 10.5% – or ten and a half cents on the dollar.

So what is the average wage then? Stats NZ figures from last year put the median weekly income at $1016, which added up per annum comes to a shade under $53,000.

So what is the effective tax rate for someone on the median wage? Fortunately, IRD has a calculator which can tell you exactly this information. Here it is:

Calculated out, someone on the median wage ends up paying about 17% of their income in income tax.

There is another potential way of calculating it though, which could bring it closer to the mark. Stats NZ’s latest Quarterly Employment Survey shows an average income of $1,243 a week, or $64,650 a year. The difference is over ‘medians’ or ‘means’ – either the middle number selected in a set of numbers, or the sum total of a collection of numbers which is then divided by the number of numbers, which can be heavily skewed by upper outliers.

Such a figure would create a whole new share of tax being paid – you can see that here:

So when Simon Bridges says “people on the average wage shouldn’t be paying almost 33 per cent in the dollar,” many will think he’s absolutely right. And fortunately for them, it’s also already totally true. It’s possible he’s doing something cute with averages and bucking the orthodoxy in how he crunches the number. It’s possible he’s plugging a bunch of other taxes into his calculator to formulate a cents-in-the-dollar tax rate. Or maybe he’s just proclaiming that something that isn’t happening won’t happen.

Next up, perhaps: Simon Bridges will announce that nobody should be imprisoned just for enjoying a slushie.