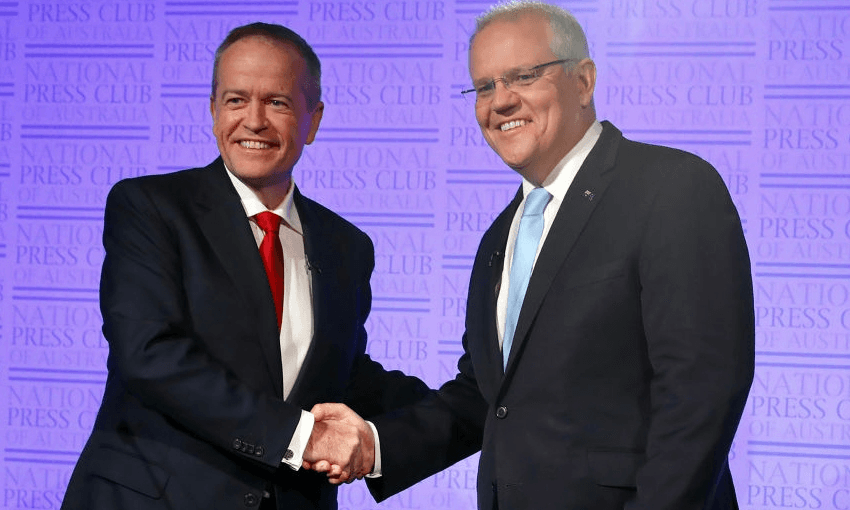 One of these two men will finish the week, and possibly even the year, as Australian PM (Getty Images)

Will it be ScoMo or Shorten? What to watch for in the Aussie election

One of these two men will finish the week, and possibly even the year, as Australian PM (Getty Images)

Our old mates the Australians are going to the polls on Saturday. What should we watch out for over here? Alex Braae has a cheat sheet for all the Trans-Tasman political nerds out there.

New Zealanders, all let us rejoice, because one of the weirdest democracies in the world is about to go to the polls, and we have a front row seat. I’m talking of course about our convict cousins in Australia, who will be electing a whole new House of Representatives and half a Senate on Saturday. And they might even end the weekend with a new prime minister too.

His name is Scott Morrison, often shorthanded down to ScoMo for some reason. He got the job all the way back in August last year, after coming up on top of one of the bloodiest rounds of intra-party fighting in years. Basically, it went like this: The leader of the Liberal Party and thus PM was a multi-millionaire John Key enthusiast called Malcolm Turnbull. Then, when he was no longer able to control the swivel-eyed fringe of his party, they dumped him to clear the way for Peter Dutton, the ultra-aggressive former immigration minister and current home affairs minister. But Dutton couldn’t get the numbers, and neither could the probably actually competent Julie Bishop, so somehow it all fell in Scott Morrison’s lap. It’s not going very well for Peter Dutton generally, who faces losing his absolutely tiny majority in the seat of Dickson.

How unfortunate for him. How has ScoMo been getting on?

Beautifully. His run as prime minister has been characterised by utterly bizarre gaffes, and low polling. Like, the gaffes are really, truly strange. His party released a picture of him with his family where he had new shoes photoshopped onto two left feet. He did a Borat impression in parliament. His party tweeted a video of Liberal MPs voting, set to a song which includes a section of Fatman Scoop repeatedly shouting “Who fuckin’ tonight?” He engaged in some surrealist performance art with journalists, over why he was flying around the country on a bus tour. Just recently, he approached an Asian Australian voter, greeted them with a ‘ni hao’, and the voter replied, “I’m Korean.” For those who follow politics just to see thirsty men embarrass themselves, he’s been a real gift.

As for the polling, the Liberal/National coalition that governs Australia has been behind in pretty much every two-party poll against the Labor opposition throughout his tenure. You might recall, falling behind Labor in repeated polls was why the Liberals got rid of the last guy too. Among the minor parties, the Greens are looking at around a 10% share, and One Nation around 5%, under two variations of a single transferable vote system. That could get either the few seats needed to chip a coalition partner over the line.

Okay, what about the other lot?

Labor (yes, they spell it wrong) are led by Bill Shorten, who has somehow held a party leadership for a full cycle. Before becoming the Labor leader in 2013, he held a succession of union roles, ministerial portfolios, and leadership preferences. Once upon a time, the party was just as riven with infighting as the Liberals, but somehow Shorten managed to keep picking which way the wind was blowing, and adjusting accordingly. Most recently, he received a popularity boost after reacting furiously to a right-wing paper running a weird smear against his dead mother. If Labor wins by a narrow margin, as is widely predicted, Shorten will probably still be PM at the end of the year.

Oh no, Australia has plenty of side-characters who could be worth watching on election night. There’s former Newstalk ZB correspondent Derryn Hinch, a guy who has been convicted of contempt of court multiple times and is currently a senator. There’s Bob Katter, a representative from Queensland who was famously muted in his support of gay marriage, because crocodiles exist, or something. There’s Fraser Anning, pretty much the closest you can come to being a Nazi without literally being a Nazi, who recently achieved fame as the target of Egg Boy’s righteous fury. There’s Pauline Hanson, who was on the populist bigotry train well before others took it mainstream.

Are they all campaigning on a platform of racism again?

As always, many of the candidates and parties are. But in a wider sense, not so much. The racism in this election campaign has been more muted. Sydney Uni professor Mary Crock told RNZ that it might actually be that the Christchurch attacks have led to the wildly xenophobic rhetoric being toned down. Politicians are much less keen to dog-whistle about immigration and “stopping the boats” than they have been in previous elections.

So what are they campaigning on then?

Strangely for Australia, climate change and the environment has emerged as a major issue for many voters. Of course, parts of the country are in the grip of the worst droughts in living memory, the boiling hot bits of the country are getting even hotter, there are crazy floods, wildfires, big cyclones, the Great Barrier Reef is dying, and all the rest of it. But still, it’s unusual for Australia to actually notice that the land is trying to kill them – they’re just so used to it.

ScoMo himself recently found himself in a spot of bother for telling kids on a climate strike to get back to school. And another climate change denying former PM, Tony Abbott, is facing defeat in his previously safe seat of Waringah. He might lose to a former Olympic skier called Zali Steggall, who is running as an independent largely on environmental issues.

Must be good for the Greens to have climate change as a big issue.

Let’s not go crazy here. The Greens are popular in the ultra-liberal pockets of Australia’s major cities, but haven’t broken through in many other places. Their nationwide polling has barely moved in years, but they’re in no danger of being knocked off.

It sounds like a great weekend is coming up for politics nerds.

It really is, and the best part about it? Voting in Australia is compulsory, so absolutely everyone can be part of it. Oh, except New Zealanders living in Australia – among the rights that our folk get stripped of over there is the right to vote.