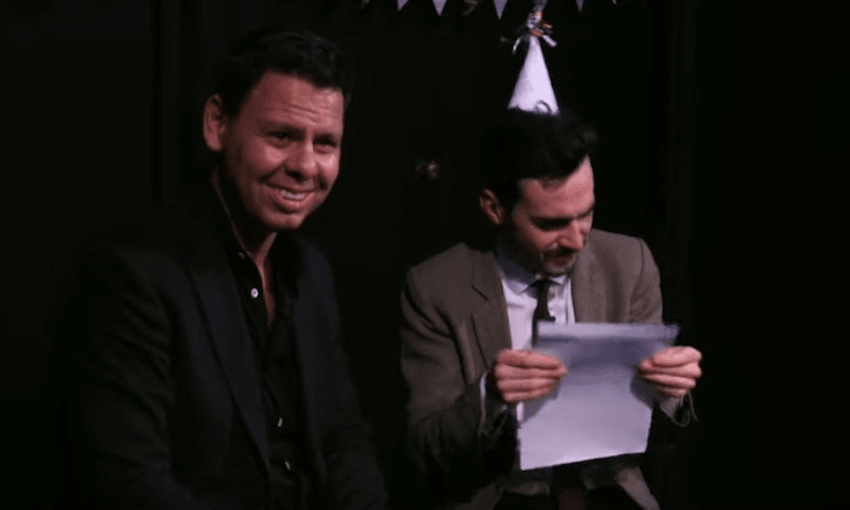 Patrick Gower and Robbie Nichol (White Man Behind a Desk)

Patrick Gower and Robbie Nichol (White Man Behind a Desk)

Interviewed by satirical comedy show White Man Behind a Desk about climate change, politics, and his career as a journalist, Newshub national correspondent Patrick Gower did not hold back.

At the start of May, the White Man Behind A Desk team set themselves the task of making a 60 minute comedy show about climate change. It went about as well as it could have.

Robbie Nicol (the White Man himself), along with director Stella Reid and co-writer Finnius Teppett, came up with the idea that Robbie’s character would avoid talking about climate change as much as possible, preferring to play games with the audience. Meanwhile, we’d invent a fictional sponsor, Greenpeace (fictional only in the sense that they did not give us any money), to make sure Robbie was forced to cover as much climate change material as possible.

Part of that material is included in this interview with Patrick Gower. Robbie, for good reason, just wants to play a drinking game, but his producer forces him to do a ‘very serious interview’ instead.

It’s a good thing he does, because, in just over ten minutes, Gower says the following:

1. “I hate to call him a colleague, but that absolute fucking disgrace Hosking.”

2. “I quit politics not long after that happened, and thank God I did, because that was blatantly fucking wrong. The worst call I ever made in my career.” (Watch the video for what ‘that’ is)

4. When asked if there’d be corporate pushback if MediaWorks took an activist stance on climate change: “Probably.”

Not to mention the tattoo on Mike McRoberts’ rear end.