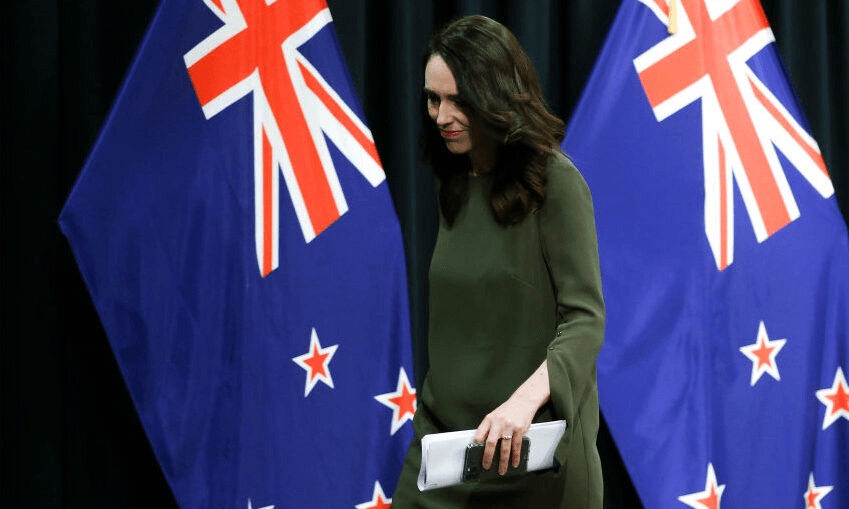 Jacinda Ardern leaves the Beehive Theatrette after answering the question on everyone’s lips: When will the NZ election be held? (Photo by Hagen Hopkins/Getty Images)

Jacinda Ardern leaves the Beehive Theatrette after answering the question on everyone’s lips: When will the NZ election be held? (Photo by Hagen Hopkins/Getty Images)

With parties commanding a majority insisting on a delay, the pressure was mounting, but the prime minister insists she wasn’t cornered into making the call to postpone by four weeks to October 17. Justin Giovannetti reports from parliament.

By postponing the general election by four weeks until October 17, the prime minister has forestalled a brewing political crisis.

New Zealand has mounted one of the world’s most successful responses to Covid-19 and is now one of the few countries to delay its national election due to the coronavirus. While the reemergence of the virus in Auckland last week raised questions about the election’s safety, the delay will come as a relief to Ardern’s opponents.

The country’s opposition parties used the weekend to publicly call for a delay, arguing that New Zealand’s election wouldn’t be a fair democratic exercise with one-third of the country’s population in partial lockdown. National, trailing badly in the polls, had indicated a delay until next year was preferable for the official opposition.

With the prime minister holding daily briefings that are widely watched, few are paying attention to the campaign promises made by the opposition parties. Campaign plans ramping up before the now cancelled September 19 vote were thrown into chaos last week.

The real threat to Ardern came from within the coalition government. New Zealand First leader Winston Peters announced last night that “there is now no ability to conduct a free and fair election if the prime minister decides to hold the general election on September 19”.

While Peters said Labour still held his confidence, the threat of a rupture that could collapse the government was clear. NZ First is currently far down in the polls and facing political oblivion unless it can convince tens of thousands of voters to switch their allegiance to the party.

Speaking at the Beehive this morning, the prime minister said that she spoke with all the party leaders over the weekend and decided that a delay would serve the country best. Any future delays are unlikely, unless some large part of the country were to go into the strictest alert level four lockdown.

“Moving an election date, especially this late in the electoral cycle is a significant decision. In the end what matters most is what is in the best interests of voters and our democracy,” said Ardern.

Parliament will now reconvene tomorrow. MPs that had packed their offices and headed off to retirement will need to return, unless they are in Auckland, where they’ll be expected to stay at home under lockdown.

The prime minister dismissed the pressure from the opposition and her coalition partner for the move. “I did not consider that a threat in the first place. Of course, a non-confidence vote would trigger an election,” she said with a slight laugh and a wave of the hand.

What the delay won’t do is provide assurances to National leader Judith Collins that her party will be able to mount a traditional election campaign followed by an in-person election unencumbered by social distancing. The opposition leader last week called for a longer delay into 2021 to allow the election to be held at a time without Covid restrictions.

“The calculation around when to hold an election is not an easy one. Covid is continuing to disrupt life around the world. Pushing an election out by several months, for instance, does not lessen the risk of disruption. This will in part be the reason why many countries have held elections while managing Covid,” said Ardern.

She cited recent national elections in South Korea, Singapore and Poland that were held on time. The United States has also shown little interest in delaying the national 2020 elections.

Ardern said New Zealand’s delay allows for three things. It will give the Electoral Commission time to reassure votes that they can vote safely. The chief electoral officer has said that they are ready to run an election under alert level two. It will provide campaigns more time to reach out to voters. And the vote will still be held in a timely way, within the country’s constitutional limits.

Whether or not campaigning resumes before Auckland’s partial lockdown is lifted will be left to each party to determine, said Ardern.

Moments after the announcement, Peters said he supported the decision and will begin planning for his electoral campaign. “New Zealand First is pleased that common sense has prevailed … Holding an election during a Covid outbreak has the risk of serious interference in our democracy. Voters would be expected to exercise their electoral rights with a dearth of information and that is unacceptable,” said Peters in a statement.

National’s Judith Collins issued a comparatively terse statement. “We acknowledge the new date,” she said of the election.

The opposition leader said the decision to bring back parliament for a few extra weeks is the right move and National will now question the government about failures at the border. “The country is in a difficult situation and the political decisions we make to get us through this should be scrutinised by elected representatives,” she said in a statement.

Green co-leader James Shaw said the prime minister’s decision strikes “a fine balance” during Covid-19. Shaw was one of the few exceptions in parliament, who said last week that he’d be happy with a decision to just get it over with and hold the election as planned. The Greens are also flirting closely with the 5% line to re-enter parliament under polling and could be wiped out on election day.

According to Shaw, his political opponents were using Covid as an excuse to call for a delay.

“We have been incredibly disappointed to see the National and other small parties continue to use the weekend to bang on about what would suit them best politically when it comes to the election day date,” he said in a statement.

“Frankly, many New Zealanders would have heard loud and clear that these parties prioritise their potential electoral successes over the health of our communities, and the strength of our democratic institutions”.

Act leader David Seymour said in a Tweet that “delaying the election was the only option to ensure a free and fair contest”.

This is only the fourth postponement of a general election in New Zealand’s history.

The first was moved from the horrors of the first world war in 1917 to the different horrors of the Spanish flu in 1919. The second delay was for about a year from 1934 as the incumbent government hoped the great depression would lessen to improve its electoral chances. It didn’t and Labour won office for the first time under Michael Joseph Savage.

The last time the election was moved was in 1941, when it looked like the allies might lose the second world war. Labour was reelected in 1943 only weeks after Italy surrendered and allied victory seemed certain.