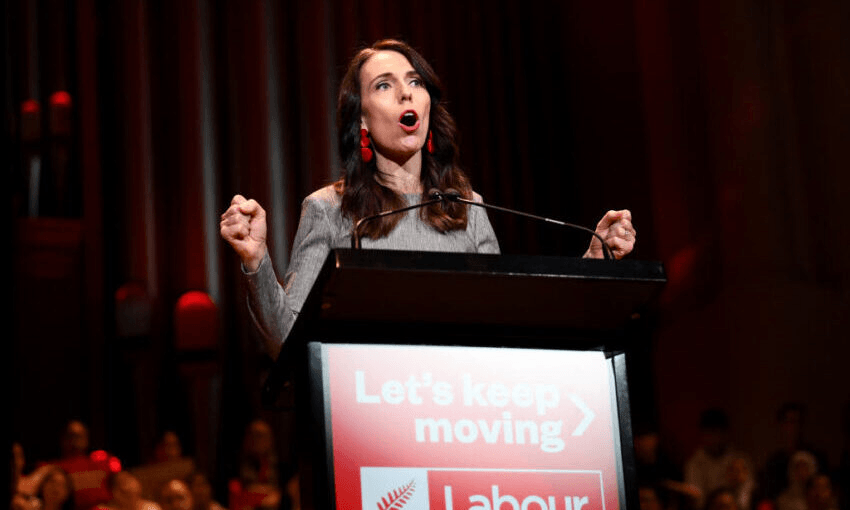 Jacinda Ardern is on track to return to the 9th floor. (Photo by Hannah Peters/Getty Images)

It’s early, but we’re calling it: Jacinda Ardern will lead the next government

Jacinda Ardern is on track to return to the 9th floor. (Photo by Hannah Peters/Getty Images)

As of 7.20pm, Labour is on track for twice as many seats as National.

Any hopes of a nail-biter election have dissipated just a few minutes after polls closed – at least as far as the biggest party of the next government is concerned.

Those numbers – with the heavy caveat that it’s just 4.2% – would see the seats in parliament break down like this:

These numbers suggest the polling of recent weeks may, if anything, have been generous to National, which has had, to put it mildly, a bad year. Three leaders, a miscalculation in costings and caucus leaks have left Judith Collins facing the most uphill of tasks. A result of this order would be National’s worst since 2002, when Bill English’s party managed only 20.9%.

Were Labour to hold on to a number like this, it would be the highest result for any party since MMP was introduced in 1996.

While it can be stated with a high degree of confidence that Jacinda Ardern will return as prime minister, it is too soon to know the composition of the government she will lead. A total party vote of around 47% or higher is likely to give Labour the option of governing alone, making it the first party to do so under MMP.

Anything less is likely to see Labour fall short of a 61-seat parliamentary majority, setting the stage for negotiations with the Greens, who so far will be celebrating a dream run in the last fortnight. Even were Labour to make 61 or more seats it might still seek a governing arrangement with the Greens as partners.

For more on the possible configurations see here.

The early results that have begun to flow in were cast before today – the advance turnout was expected to be big, but it outnumbered the Electoral Commission’s prediction of a 60% advance vote. Close to two million votes were cast by the end of yesterday, amounting to 75% of the total turnout from 2017.

In 2017, the results at 3% counted matched the final results pretty closely.

The Māori Party’s hopes of returning to parliament hinge on an electorate victory – the party has put the focus on candidates rather than a party vote and has no chance of making the 5% threshold.