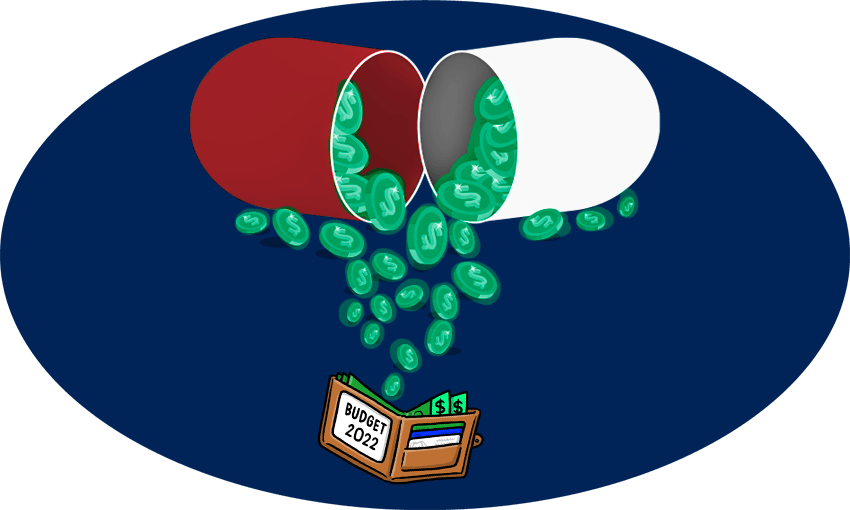 Budget 2022: Emily Writes’ family is one of many advocating for a boost in funding for Pharmac, so their loved ones can access potentially life-saving medications and medical devices.

This is an edited version of a post first published on the author’s newsletter, Emily Writes Weekly.

I have been invited to attend the budget reading today by a group of other advocates and activists who are hoping to see an increase in support for medically fragile and disabled people. We are a mix of people who care deeply about these issues – some of us are new to the cause, others have been fighting for what feels like forever.

My son has spoken at the health select committee calling for funding for continuous glucose monitors for diabetics. He has been invited to attend the budget reading but I’m unsure whether he should go.

Last year’s budget felt like it left disabled and immunocompromised people behind.

A $200m increase over four years to Pharmac’s $1.1bn annual budget to pay for medicines and other health treatments is tiny and completely inadequate. For comparison, $306 million was given to “safeguard the future of Scott Base”.

Currently, around 3.77 million New Zealanders receive funded medicines. As of March, there were 128 prioritised modern medicines on the Pharmac “options for investment” list – the drugs Pharmac says it would like to fund if it had the budget – including 36 medicines added since July 21. The list includes continuous glucose monitors, Spinraza, Stelara (also known by its generic name ustekinumab) and Erbitux (generic name cetuximab).

There are another 280 medicines still being slowly assessed by Pharmac, Qinlock for GIST cancer being one of them.

In April last year, Pharmac estimated that at least $400 million was needed to clear the priority list, but the 2021 budget gave an annual boost of just $50m ($200m over four years). With the addition of Trikafta this year, the annual shortfall rises to more than $500 million.

But advocate Malcolm Mulholland (Ngāti Kahungunu) says Pharmac and politicians tend to quote a price that is higher than necessary. “Often they will quote the American list price, which is the most you would ever pay anywhere in the world,” he says.

Through Pharmac’s rebate scheme, negotiations begin with pharmaceutical companies at a 50% discount, Mulholland says, and they negotiate down from there.

“So let’s say, for argument’s sake, a drug costs $5,000. Pharmac would begin negotiations at $2,500 and work their way down from there. Pharmac’s OFI list is being quoted at the top list price of $500 million. We know then that they will most likely need something like $250 to $300 million annually to clear that list. The reason I haven’t said $250m is due to Trikafta having been recently added.”

The greatest hope we can have for the budget is that Pharmac receives an annual budget increase of $300 million. And this should not include the cost of Covid-19 vaccines and medications.

And then maybe, our families wouldn’t be at the mercy of an organisation that has a drug-buying strategy that disadvantages Māori, Pasifika, disabled people and those with rare disorders.

The independent report on Pharmac that highlighted this was damning. Released late last year, it said Pharmac was underperforming in helping to remove inequitable health outcomes, Te Tiriti o Waitangi principles were largely unseen in decision-making processes, and there was excessive focus on containing costs.

Concerns were raised that the cost-saving model “may not be the right one to meet future health needs”.

Those of us with medically fragile children desperate for medicines and tech that Pharmac won’t fund already know this.