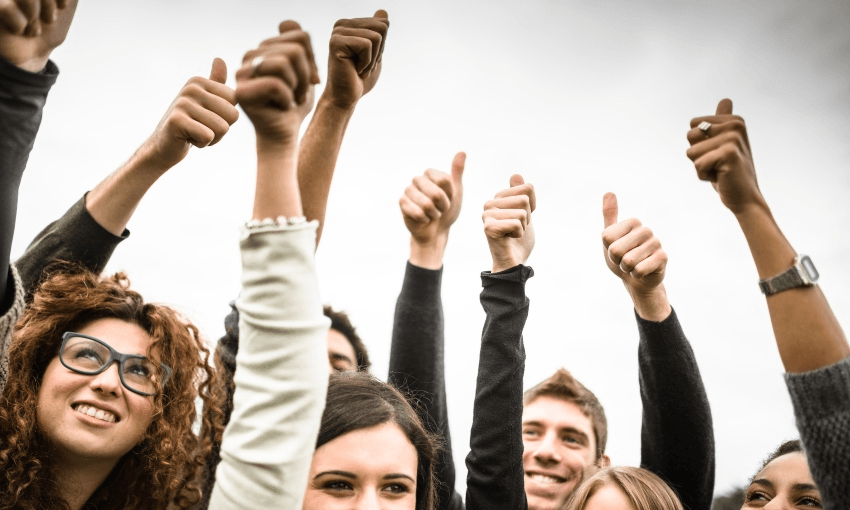 A 14-year-old on how to rescue politics

By Oli Morphew
Guest writer
Made possible by

When teenagers today are being called upon to solve the problems of tomorrow, why aren’t they given the right to participate in democracy? Fourteen-year-old Oli Morphew makes the case for lowering the voting age.

If you’re going to deprive someone of their rights, you’d better be completely assured of the reasons you’re doing so, and equally sure that it’s the right thing to do.

There is no good reason why depriving 16 and 17-year-olds of the vote in Aotearoa is the right thing to do. Voting is a fundamental human right.  One person, one vote is the foundation of democracy. In order for a fair democracy, we need a vote that represents people of all age demographics.

It was incredibly refreshing to hear youth voices in parliament this week at Youth Parliament. Speaking on sustainable energy, one Youth MP said that we shouldn’t be “commending (young people) as inspirational young leaders whilst prohibiting them from voting on these issues that are more relevant to them.” Currently, in parliament issues are not debated from a youth context because of the lack of voting power we have as a demographic. This is the vicious cycle that prohibits true representation of youth in politics.

I am 14 years old, and the national spokesperson for Make it 16, a campaign to lower the voting age in Aotearoa. Trying to break the cycle of youth disengagement is what drew me to this campaign. Hearing about the abysmal voting statistics for young people, and understanding the importance of something like voting being embedded into action at a young age to maintain the future of democracy.

I am currently four years off being able to vote, but have been civically engaged since I was much younger. Simple things like debating and listening to the news have shaped my mind around politics. I have an opinion, and so do other fourteen year olds both like me and unlike me. Young people who have never had an active conversation in their life about ‘democracy’ or ‘MMP’ or any of these ‘adult topics’ regarding government still think about the future.  They still hope for a better Aotearoa New Zealand. This includes young people of all schools, areas and outlooks on politics.

The line being drawn at 18 is highly unreasonable. Sixteen year olds can drive, give consent, obtain a gun license, leave school and home – seventeen year olds can even join the army. Nobody could claim that any of these freedoms required greater maturity than the freedom to cast a ballot. If 17 year olds can fight for our country, why can’t they have a fair say in our country?

If the voting age is lowered to 16, we will see some 14 year olds, and all 15, 16 and 17 year olds of today able to vote in the next general election. This is a huge amount of people who otherwise would have no representation, and are certainly capable of having their own outlook on life. This would contribute massively to the engagement of youth in democracy. Beneficial to democracy today, and democracy tomorrow. Beneficial to young people, and to society.

Our country denies the right to vote to around a fifth of its population on the basis of age. As mentioned so many times before (notably, by young people) we are the generation of people that will deal with every single decision made by the government, big and small. I see it as ridiculous that I have had to strike from school to get the government to notice how much I care about the climate when I can’t even have a fair say on this issue in the next election.

Regardless of personal political views young people should get a voice. Youth Parliament this week was an example of the important contributions young people have to make to holding our government accountable for the big challenges facing New Zealand that go across party lines.

The Make it 16 campaign is about this exact idea – we are a non-partisan campaign and we welcome anyone with any view that wants to see a fairer and stronger democracy in Aotearoa.