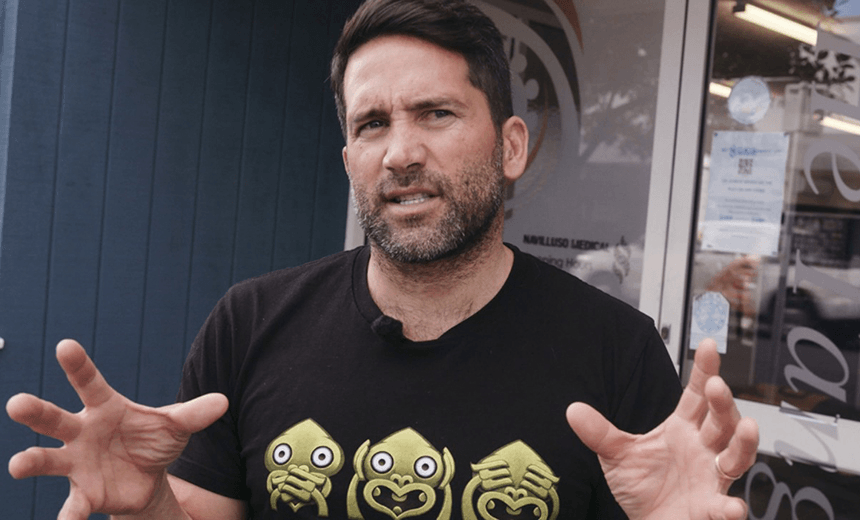 After several years of flirting with the bloodsport we call politics, 2014 New Zealander of the Year Dr Lance O’Sullivan has entered the fracas, announcing he will run for the Māori Party in 2020. But why? And what does he stand for? Don Rowe finds out.

When I profiled Dr Lance O’Sullivan last year he was one of the most eligible political bachelors on the market. Courted by the big dogs on both sides of the spectrum, he eventually endorsed the Māori Party, pissing off basically everyone on all sides including some in his support base.

“I think we, as Māori, also need to realise that compromise is a part of involvement in New Zealand politics,” he said at the time.

Now, a week out from Election 2017, he’s gone a step further than endorsement, announcing on Sunday afternoon his intention to run for parliament in 2020. “Fuar,” I said, before scuttling off to The Spinoff’s shower/interview room to ask for an explanation. It went mostly like this:

This really has been a matter of when, not if. But why the Māori Party? I imagine everyone has been sniffing around, so why them, and why now?

Because I believe that in the history of New Zealand politics and government, the 2020 election is an opportunity to enable MMP to work its best for New Zealand.

What would it look like if we didn’t have red and blue, left and right, Labour and National, but instead we had a coalition of centrist parties that better reflects the multicoloured, multidimensional culture of New Zealand that we live in now? Because quite frankly the ideologies of the left and right are out of date. I think the time is right to disrupt things and the mechanisms are there to allow that to happen.

From another point of view, I believe a political party with Māori values underpinning it, which has the interest of all New Zealanders at heart, could be a very, very exciting party. I believe that the skeleton and the framework and the scaffolding is there and I think the Māori Party has done really well to demonstrate over the last nine years why MMP could work. The Māori Party has and will almost certainly always be a very well-aligned party for me.

It’s interesting that you say the left-right ideology is out of date because you’re a good example of that. So too with the Māori Party – they’re pragmatists at heart. They want to be in government, regardless of whether it’s a left or right leaning government, because that’s how you get legislation passed. Did you see that as an advantage?

Absolutely. In terms of the last nine years, minority parties have been able to effect change disproportionate to their size and that’s fantastic. That’s the benefit of MMP. A simple assessment here is that there are very credible aspects to what the National Party and the Labour Party bring, but you almost want to take a little bit of both and form something that is in the middle there, something that really reaches most people’s wants and desires. I’m keen to be a part of a Māori Party that is progressive and is looking at developing an enterprising and entrepreneurial spirit in New Zealand.

On the theme of pragmatism, I was at a hui in Ruatoki the other day that Te Ururoa Flavell was attending and it surprised me that his style of politics was very direct. He didn’t pull any punches.

There’s a sense of urgency that exists. I spoke to members of the Māori Party on Sunday, and I said that we need to be thinking of a 50-100 year strategy. It can’t be just about the next three, six, nine years, it should be about what we’re putting in place that will exist through the next 50-100 years. Then the question is: what does it take to achieve that? Realistically we need to be pragmatic and say ‘we’re not going to achieve everything in one term, it might take a few decades, but we have to be taking steps towards that’.

People have to accept that turning around 170 years of social and economic dislocation is not going to happen over one term. That’s where the pragmatism exists, but there’s also a level of urgency, which means there’s sort of a tension there. I think about poverty and we know that the drivers out of it, are jobs which create warm homes and are driven by better education outcomes. Those are generational things that will take time.

But I tell you what, I drive down the main street of Kaitaia, and I can tell you one thing that I could do that would immediately alleviate child poverty, and that’s to get rid our pokie machines from the six venues in Kaitaia. I’d stop the home shopping trucks that are just predators. I’d regulate these instant finance groups. I’d limit alcohol outlets in high-needs communities. You’ve got me on a roll.

Whose leadership style would you like to emulate? What sort of leader do you want to be in politics?

Someone who stays connected with the people. Someone who is sincere and authentic. Someone who knows how to bring people together for a common purpose and I guess someone who’s really open to change. I don’t want to be committed to doing things because they’ve always been done that way. Someone who is a risk taker. I think it’s a mix of local and global political leaders that have shaped my thinking and we’re talking both in government and community leaders over the years. I also feel like I bring my own inherent sense of leadership skills too.

What does a Māori perspective and Māori values bring to politics?

I think one thing, talking from a very authentic Māori platform, it would be a sense of manāki and ensuring that we don’t leave people behind. Being compassionate and generous and kind and caring. I mean that in an empowering way. Even from a service delivery point of view I think we waste a lot of money rocking up to people’s doorsteps before we’ve even engaged with them. They don’t want us there and so we’re not effecting the outcomes that we could be if we looked at it from a different angle. Part of that goes into the idea of self-determination, tino rangitiratanga. In my opinion we don’t ask people often enough what the actual problem is, and how they could solve that for themselves.

The 15-year-olds of today should be being prepared to vote in 2020. That’s how you drive engagement. We pay lip service to the idea of self determination but we don’t give people the tools to actually make the most of it.

Then there’s the idea of aroha, and we talk about it very much along the line of love, absolute care and dedication, and that’s really underpinned my profession and my life to date. I wouldn’t go into this because I love 80 hour weeks and never seeing my family, and I’m in for a lot of grief and a lot of criticism – [but] I would make sacrifices because I believe other people should enjoy some of the benefits of the country that I have.

Having said that, I also believe that a country like ours should recognise the value in people like me and the journey I’ve had, because not recognising that value really denies our country the opportunity for leaders. If I didn’t have the support of this country through the welfare state, and a Māori-specific education that allowed me to flourish where the mainstream system didn’t, I wouldn’t have been able to become someone who has a lot to offer. That’s an example of investing in our vulnerable, and it’s the right thing to do. And not only is it right, but the rewards for us as a country would be huge.

Do you see your announcement having an impact on the election this weekend?

My position is that this election – because I’m committed to providing a contribution to the country through the political process in 2020 – there’s an opportunity here for voters to ensure that the Māori Party is in a healthy state moving forward, rather than one that needs resuscitation. That’d be a great kick-start for people like me and some other high-calibre candidates I’ve spoken to in the last 12 months. So I’m encouraging people to consider that when they vote this weekend.