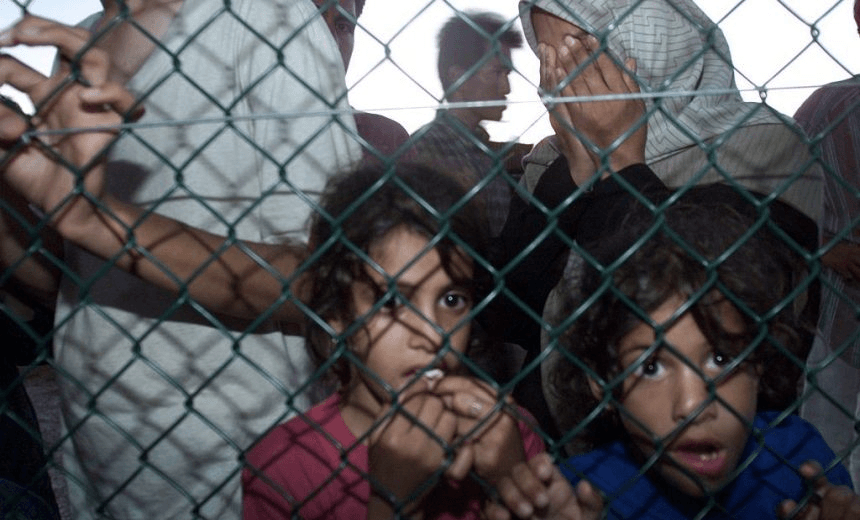 Asylum seekers from Norwegian freighter the MV Tampa and local fishing boat the Aceng arrive at Nauru off the Australian coast on 19 September 2001. (Photo by Fairfax Media/Fairfax Media via Getty Images)

Asylum seekers from Norwegian freighter the MV Tampa and local fishing boat the Aceng arrive at Nauru off the Australian coast on 19 September 2001. (Photo by Fairfax Media/Fairfax Media via Getty Images)

The Coalition win in Australia has dealt a blow to the hopes of more than 800 refugees stuck on Pacific Islands, writes RNZ Pacific’s Johnny Blades.

Refugees in Australia’s offshore processing centres on Nauru and Papua New Guinea’s Manus Island had their hopes pinned on a Labor victory yesterday. Labor’s leader Bill Shorten had promised to expedite the resettlement of the remaining refugees in third countries, since they are banned from ever settling in Australia.

Labor also pledged to revisit New Zealand’s offer to annually resettle 150 refugees remaining in Australia’s offshore detention centre. The offer, first made when John Key was in charge, has been reiterated by prime minister Jacinda Ardern.

There are still more than 500 refugee men on Manus Island and 350 men and women still on Nauru. They fled from conflict and persecution in countries including Iran, Afghanistan and Sri Lanka. Many of them have been languishing there in hot, harsh conditions for almost six years, since Australia reactivated its offshore processing policy.

Over these years, the accounts about the disintegration of mental and physical health among those held on Manus and Nauru have piled up, as have the suicide attempts and problems with local communities.

In the case of Manus, PNG’s Supreme Court ruled that holding the men on the island against their will was illegal. That was three years ago.

Australia’s reluctance to abide by that ruling and help the men leave Manus has only added to the lingering uncertainty over their futures which has proven so torturous for the refugees. Furthermore, many of the refugees on Manus say they do not consider integration into PNG society as an option, and that they want asylum in New Zealand, because PNG is not safe for them.

For the refugees on both Manus and Nauru, the re-election of Morrison is bad news. Scott Morrison is one of the architects of a national refugee policy that a global health expert described as one of the world’s most cruel.

Morrison’s Liberals fought tooth and nail against the Urgent Medical Treatment Bill which finally provided for sick refugees on Nauru and Manus to be eligible for medivacs to the mainland. The bill was passed in February, giving a glimmer of hope to the refugees and advocates, but Morrison ensured they would not make it to the mainland after all by swiftly re-opening the detention centre on Australia’s remote Christmas Island.

Immigration was largely missing as an issue from Australia’s election campaign as a consequence of the Christchurch mosque attacks, according to political commentators and academics. But in the final analysis, a government which is determined to stick by its hard-line refugee policy was given a mandate to keep on governing.

The Coalition has not ruled out New Zealand’s offer entirely, but says it is not presently in Australia’s best interests.

Home affairs minister Peter Dutton recently claimed that people-smugglers are marketing New Zealand, suggesting that taking up Wellington’s offer would provide them with an incentive to renew boat trips to this part of the world.

Instead, Canberra will continue to focus on the US refugee swap deal that former prime minister Malcolm Turnbull agreed with the US at the tail end of the Obama administration.

While US president Donald Trump subsequently described it as a bum deal, the US is honouring the agreement to have about 1200 refugees from Manus and Nauru sent there, although not without controversy as evident in this week’s revelations that among those refugees Australia had taken in exchange were alleged Rwandan murderers.

So far, 515 refugees from Nauru and Manus have been resettled under the US deal, while almost 700 are still being vetted at a glacial pace.

Things have not gone well even for those who have gone to the US under the deal, with some of them recently urging others still on Nauru and Manus not to follow in their footsteps.

Australian officials this week revealed that on the eve of departure, transferees told them they preferred Australia over the US, so were holding out hope that border protection policies would change if Labor won.

Labor didn’t win. For the refugees on Manus and Nauru, this means that hanging on to hope has become so much harder.