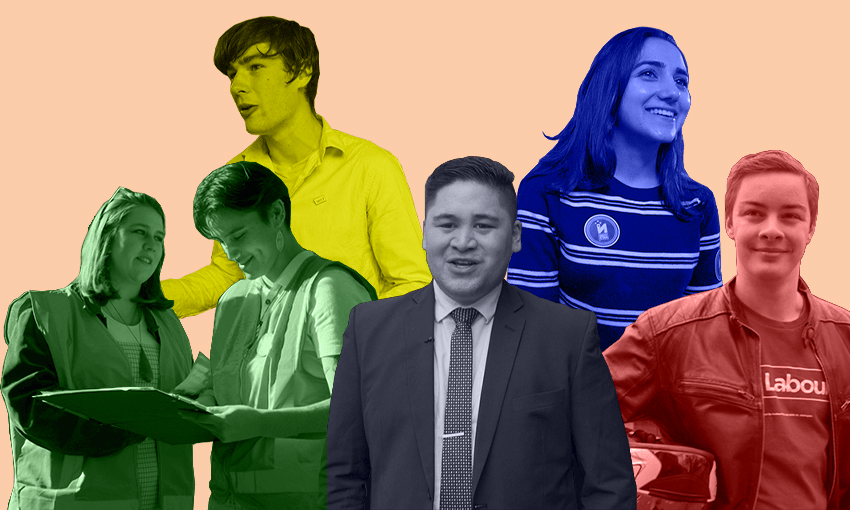 First released in 2020, our video series Youth Wings went behind the O Week stalls to get to know some of the youngest and most passionate members of Aotearoa’s main political parties. Watch every episode here.

Find more original series to watch at The Spinoff YouTube.

Jay McLaren-Harris had always wanted to meet Winston Peters. Then one day on the main street of Dargaville, he did. Now aged 20, he’s the chairman of Young NZ First.

Adam Brand was born into a family of die-hard Labour supporters and raised on tales of the party’s greatest achievements. Now he wants to help write the next chapter.

From day one, the Green Party of Aotearoa New Zealand has been a party led by co-leaders. That philosophy extends to the party’s youth wing, where co-convenors Danielle Marks (Te Arawa) and Matariki Roche (Ngāti Raukawa) are among the party’s next generation.

Young Act president Felix Poole loves the freedom his party’s youth wing has to speak out and advocate for radical policy ideas. But are there certain lines that need to be drawn within the youth wing itself? Content warning: This episode contains themes of sexual harassment, which may be distressing to some viewers.

Aryana Nafissi’s favourite show is Question Time on Parliament TV, which her sister Azita agrees is “better than Real Housewives”. And the Young Nats Northern chairperson has seen her fair share of drama unfold this year, with three different leaders taking the reins of her party.

Filmed live at the concert chamber of the Auckland Town Hall, six leaders from the youth wings of Aotearoa’s biggest political parties go head-to-head in the debate we’ve all been waiting for this election year. Moderated by Spinoff editor Toby Manhire. Content warning: this episode contains themes of sexual harassment, which may be distressing to some viewers.

Youth Wings was made with the support of NZ On Air.