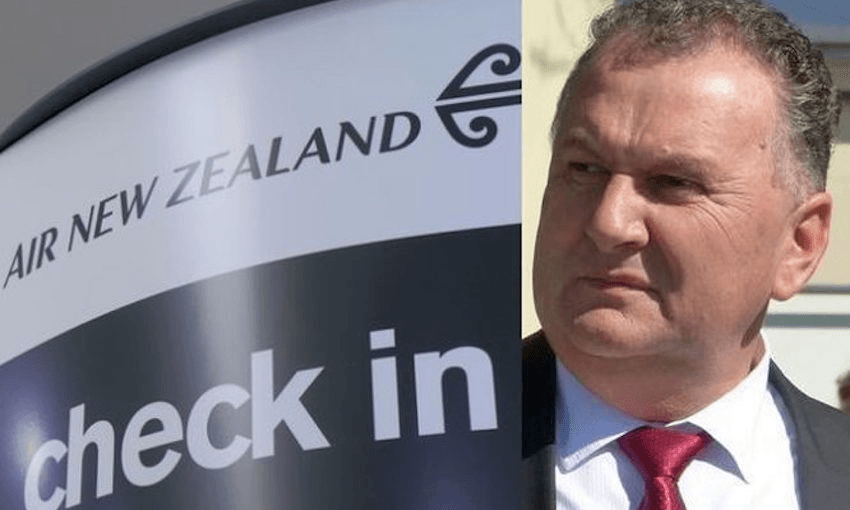 The NZ First minister is calling on Air NZ to reinstate regional routes that have been closed for commercial reasons – thereby demonstrating a fundamental misunderstanding of the national airline’s legal duties, writes law professor Andrew Geddis.

Yesterday morning, Regional Economic Development Minister Shane Jones went on RNZ’s Morning Report to double down on his earlier claims that Air New Zealand was failing provincial New Zealand. The chair and board of the organisation, Jones said, needed to realise there was a new government in place and it was going to ensure that Air New Zealand properly served the country as a whole.

That makes for great copy and no doubt will boost NZ First’s status as champion of long-suffering regional New Zealand. As the husband of someone who depends heavily on the Dunedin-Wellington-Auckland route, I could even cheer his sentiments on.

But here’s the problem that Jones has.

Note that their duty is to the best interests of the company. Not to the nation. Not to the provinces. Not even to the shareholders directly – even where the majority shareholder is an elected minister of the Crown. (Just to be clear, however – Air New Zealand’s shareholding minister is the minister of finance, Grant Robertson. It isn’t Shane Jones.)

So, if the directors of Air New Zealand are of the opinion that the company’s best interests are served by closing particular routes and opening others, then that’s what they legally are required to do. They simply cannot say “we believe it would be best for Air New Zealand to stop flying to Kāpiti, but we should do right by it and its people so we’ll keep on doing it.”

In fact, if they were to say that, then they’d potentially be committing an offence that is punishable by up to five years’ imprisonment or a fine of up to $200,000. Not that I think they’d be prosecuted for making one such route decision, but the existence of this offence provision shows just how important these fundamental director’s duties are.

Now, of course, the question of what is in a company’s “best interest” can be a bit iffy, to use a technical legal term. And shareholder activists can (and do) try to convince directors that it actually would be in the company’s interests to change their behaviour in a myriad of ways.

But Jones’ attack on Air New Zealand seems to go beyond this activism. He’s effectively arguing that the company should put nation building or community servicing objectives ahead of its commercial interests. That’s a call to change the basic nature of what Air New Zealand is as an entity.

Maybe there are good arguments for doing so (see my earlier reference to how important the Dunedin-Wellington-Auckland route is for my family dynamics!) But if it is going to be done, it should be done openly and following debate in parliament. Put up legislation to transform Air New Zealand into a SOE and then direct the board to include “nation building” in its statement of corporate intent.

Of course, the problem with this course of action is that Air New Zealand does not just belong to the Crown. It is 48% owned by private shareholders, the large majority of whom live offshore. If Shane Jones wants to renationalise the company, they will have to be bought out – which will cost the taxpayer over $1 billion.

Furthermore, any action that the New Zealand government takes that affects the value of these private shareholdings may constitute a breach of investor rights under our various free trade agreements. Ironically, the more successful Jones is in turning Air New Zealand into a provincial service provider, the more likely he makes it that international capital will bring an ISDS action against the country.

So, given that actually doing anything to change Air New Zealand’s status will be too politically and financially costly, Jones is left furiously berating it in the media and telling various people to resign. Which may help lift NZ First from below the 5% threshold in the polls – but it isn’t what effective government ministers should be about.