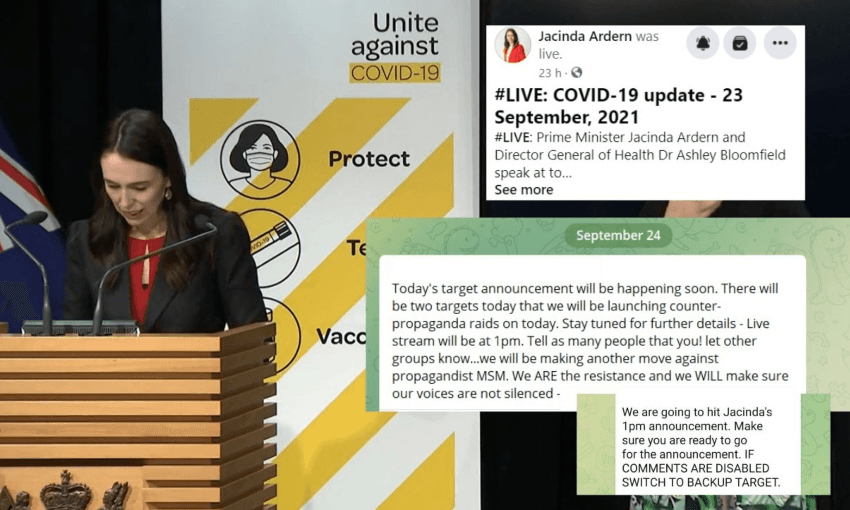 More than 100,000 people watched the Facebook stream of the September 23 briefing, while more than 3,000 comments were posted.

More than 100,000 people watched the Facebook stream of the September 23 briefing, while more than 3,000 comments were posted.

The benefits of reaching the wider audience outweigh the risk of damage, says Ardern.

The daily 1pm updates have become the central set-piece of New Zealand’s response to the Covid-19 crisis. Among the popular live streams of these Beehive briefings is that on the prime minister’s own Facebook page. Yesterday’s, for example, has so far attracte more than 120,000 views. In recent days, however, that stream, along with media outlets’ Facebook equivalents, have been flooded by anti-vaccination campaigners, with a rainstorm of comments spreading misinformation.

Many hundreds of comments, often landing in quick succession, are either direct or coded anti-vaccination messages. And the proportion of this misinformation has noticeably grown in recent days.

That may reflect a growing emphasis on the vaccination programme, but it is also born of something else: a concerted and deliberate targeting of Facebook livestream comment threads by groups that spread misinformation.

“We are going to hit Jainda’s 1pm announcement,” reads one message in a group on the messaging app Signal, which has become a bolthole for users and groups banned from Facebook, YouTube and other platforms. “Make sure you are ready to go for the announcement … At 1.06pm we will make our move and spam the comments with YOUR choice of message.”

Another that directs users to a New Zealand media outlet’s Facebook livestream explains: “At 1pm we will make our move and spam the comments … The goal is to get behind the resistance protests … WE WILL NOT ACCEPT YOUR FEAR MONGERING AND LIES.”

The last week has seen Facebook on the defensive over its handling of misinformation and vaccination. A longform investigation by the Wall Street Journal, headlined How Facebook Hobbled Mark Zuckerberg’s Bid to Get America Vaccinated, revealed the social media giant failing to act on a number of shortcomings identified by its own employees, particularly in relation to the function of polarising content in pushing posts up people’s feeds.

Earlier today in New Zealand the “NZ Testimonials” group on Facebook, which had thousands of members and had become a home for overwhelmingly false claims about vaccines, was shut down.

In response to questions from The Spinoff, a spokesperson for the prime minister said the advantages of using Facebook outweighed any shortcomings.

“Despite the comments of a handful of people, the information conveyed during these updates include alert level changes and restrictions, how to access financial assistance, and other vital public health messages, and needs to be communicated to the widest population possible … The comments of a few people should not prevent this information being shared as widely as possible.”

A spokesperson for Facebook said: “We don’t allow anyone to share misinformation about Covid-19 that could lead to imminent physical harm, or misinformation that could lead to Covid-19 vaccine hesitancy. Groups, Pages and accounts that repeatedly violate our policies in these areas may face restrictions or removal from our platforms. We encourage people to use the tools available on Facebook Live to control who can comment and how frequently they can comment on a broadcast.”