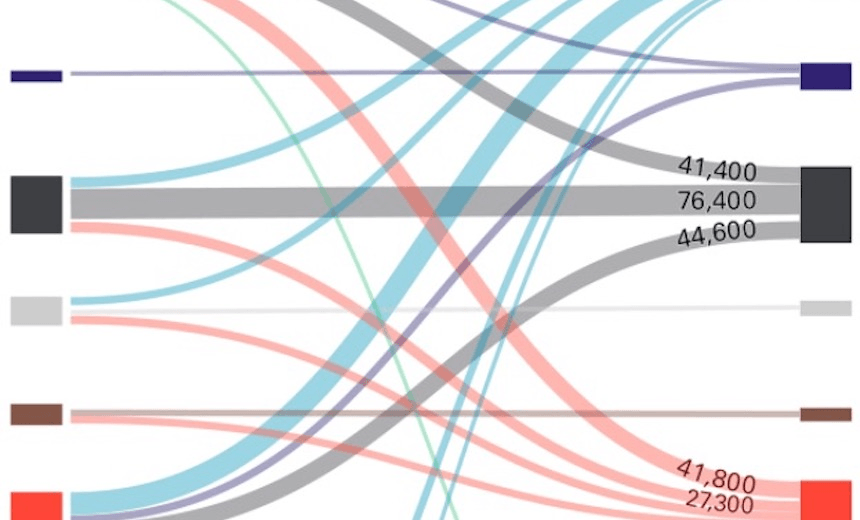 The tick-splitters: how New Zealanders used their two votes, a visualisation

More than a quarter of those who voted gave their electorate vote to someone from a different party than the one they backed for their party vote. Chris McDowall breaks it down.

Last Friday the Electoral Commission released detailed statistics on how New Zealanders voted in the 2017 general election. The website features special vote breakdowns, electoral vote statistics by party, an extended explanation of the Sainte-Laguë allocation formula and more. Be still, my beating heart!

The split vote tables caught my eye. These statistics detail how people split their votes between political parties. The more I looked, the more intrigued I became.

A quick refresher. Under MMP, each voter gets two votes: an electorate vote to choose their local member of parliament and a party vote to decide how many seats each political party gets in parliament. Most people give both votes to the same party. A split vote is when a person votes for an electoral candidate but not his or her party. In the 2017 General Election, 27.3% of voters split their votes — a drop from 31.6% in 2014.

Split voters are fascinating. Political coverage typically sweeps people into political buckets. Commentators tend to talk about broad categories: the National voters, the Labour voters, the Greens and those mysterious “undecideds”. This masks the diversity of the nation’s nuanced and sometimes seemingly contradictory voting behaviour.

Here is a flow diagram of how New Zealanders allocated their electorate and party votes in 2017.

For legibility, only flows of 10,000 votes or greater are displayed. This means that the flows on the graphic don’t sum to equal the bars. Also, the “Other” category includes informal votes.

A few interesting details pop out:

The overall pattern of split votes is by no means universal. Each electorate has its own distinct patterns. The seven Māori electorates, for example, show markedly different voting behaviours to the global sums.

The larger voting patterns hide smaller stories. My favourite is perhaps New Zealand’s ultimate protest vote. One person in Epsom chose to give one tick to the Conservative candidate, Leighton Baker, and the other to Aotearoa Legalise Cannabis Party. Smooth move, Cool Breeze. Smooth move.