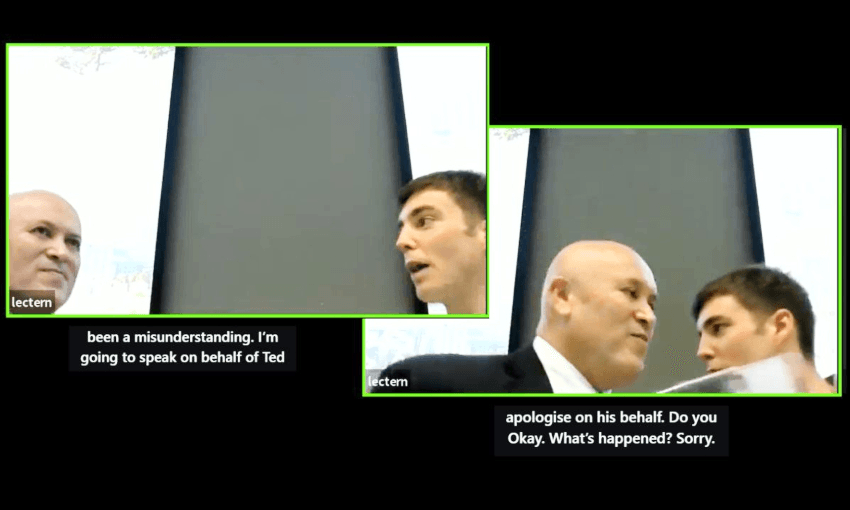 Ted Johnston and Jack Tame in frames from the Debating Society livestream.

Ted Johnston and Jack Tame in frames from the Debating Society livestream.

Eggs flew, and so did insults, but there was also a good bit of healthy debate, reports Toby Manhire from the Auckland Debsoc candidate event.

Half a dozen would-be mayors at a University of Auckland debate last night were treated to a rambunctious crowd, energetic rebuttal and a pair of egg missiles.

Jack Tame, moderator for the Debating Society event, scrambled to explain a “misunderstanding” after an egg man sprung out of a row at the front of the auditorium and hurled two objects – which to the naked eye appeared to be standard grade 6s – at Ted Johnston, co-leader of the New Conservative Party. It was unclear whether the assailant had packed the eggs with a protest in mind, or was just planning a lovely frittata. His face was hidden behind a mask, but was that motivated by ovoid or Covid concerns? Before The Spinoff had a chance to ask, he had scurried out the back door of the subterranean lecture theatre.

The egging came after Johnston remonstrated with a woman whom he mistook for a heckler. “Team Efeso, please be quiet,” said Johnston, believing the woman to be a supporter of the Labour-endorsed candidate Efeso Collins. “She has Tourette’s, you asshole,” shouted one of the friends who surrounded and supported the audience member. A few seconds later, the egg-pelter, who did not appear to be linked to the audience member, struck. One hit him on the shoulder; the other missed its target, leaving candidate Craig Lord with a spot of dry cleaning to do. “Looks like Labour’s getting scared of the job I’m doing,” said Johnston.

Tame called for calm and explained the situation to Johnston. “I’m sorry about that,” said Johnston. “I apologise. It was a misunderstanding.” Egg on his suit but only proverbially on his face, he added: “Anyway, look, I’ve been a bouncer for 10 years around the world so that sort of thing doesn’t bother me.”

The debate was otherwise conducted in good spirits. A number of candidates remarked that it was by far the liveliest so far – though to be fair that says as much as anything about the state of the events to date.

Collins was comfortably the crowd favourite at a university where he was once student president. While he exhorted the students to turn out and vote, he fell short of raising the roof in a room that seemed mostly on his side. He restated the case for fees-free transport, adding that “we’ve got to learn to share better” in finding tarmac space for pedestrians and cyclists. Collins emphasised Auckland as a part of a Pacific region where climate change is an existential threat. As mayor, he said, he would be “completely focused on climate action”.

Viv Beck, recently endorsed as candidate by the centre-right C&R group, was almost unrecognisable from the cautious, sombre figure of the early part of the campaign, having gone up several gears in energy. She looked for the first time like she was enjoying herself. Beck defended her tenure as head of Heart of the City. The “mess” of downtown was “devastating”, she said, but that could not be sheeted back to her. It was a result of council failures and the ruinous impacts of Covid-19.

A tactic also emerged: Beck made repeated chummy references to Efeso Collins. (“My friend Mr Collins.” “My friend Efeso.” “Efeso, have you noticed the biggest insults are saved up for us? They’re worried about us.”) She wants to frame the race as a contest between the two candidates with the formal-endorsement imprimatur – something the other two leading contenders on the centre-right, Leo Molloy and Wayne Brown, will firmly resist. In an election without any transferable vote, meanwhile, nothing suits Collins better than a split vote on that side of the spectrum.

Molloy was in a good mood. He only called Jack Tame “woke” once. Despite being introduced as Mr Fisticuffs, there was no shirtfronting, menace or stunts. He did, though, promise that he would be starring in “a piece to camera” on One News tonight, promoting a “big event” – seemingly a bid for a Commonwealth Games in 2034 – to revitalise downtown Auckland. “It’s true, you know it,” he said. “I’m the one that gets all the clicks.” “So does Trump!” hollered someone from the crowd. Beck later countered: “You might get the clicks, but can you imagine listening to him for the next three years?”

On three waters, all candidates except Collins said they opposed the reforms. Molloy stressed that his opposition was about losing control of the important asset of Watercare, however, rather than co-governance, which had proved to be very effective in a range of areas. “That doesn’t bother me at all, “ he said. “It really is nothing to be afraid of.”

Wayne Brown had a prior commitment, but he found an avatar in the form of his next-door neighbour, Jack Tame. Evidently having tired of doing all the Qing and none of the Aing, the TVNZ journalist read aloud Brown’s positions on various subjects, even extemporising in character in response to interruptions. Tame had opened the debate by wondering why anyone could possibly want what “must be the single worst job in the world”, but at this rate he may be the first person to be elected mayor despite not being on the ballot form.

The other Brown – Gary – was there, too: amiable, upbeat, emphasising his local board experience. Perennial candidate Craig Lord, the innocent egg backstop, performed well. He mounted a strong argument for overhauling the contracting system for council work to focus on local providers, but failed to win the room with his pitch for an overhaul of public transport that focused on “thinking outside the box” with “overhead pods … like taxis above us”.

Johnston had other moments that might have encouraged the egging. He railed against “wasting money on global warming”. On the state of the central city: “What do you expect, all these large buildings, filling them up with beneficiaries, poor people, et cetera?” To his question came a response in the form of a chorus of boos. Much of Johnston’s efforts were focused on complaining about being excluded from previous events. His best line of the night was a barb at Molloy, who chuckled though Johnston’s prediction that his campaign would “self-destruct”. “All of his millions and all of his men,” said Johnston, “can’t put his campaign together again.”

The debate limped towards its conclusion with questions from the audience. One woman stood to urge the crowd to apologise to the candidates for the egging, but there was little enthusiasm for that from those in attendance, nor appetite from the participants. The consensus position, to misquote Tame, appeared to be that you can’t make an omelette without you know what.

“Debsoc supports free speech on campus and does not condone the use of egg-based violence against others,” was the official word from the hosts last night. “The exec apologises to anyone with a lecture in B28 tomorrow: despite our best attempts at cleaning, it may still smell a bit eggy in there.”

This article was updated to correct an incorrect gender attribution. Apologies.