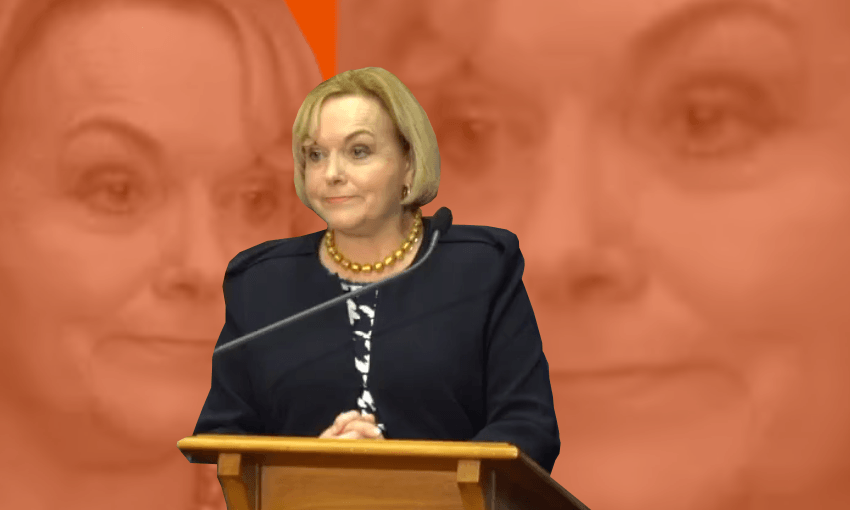 Judith Collins has been lobbing jokes left, right, and centre during her two weeks in charge of National.

Eyebrow comedy: All the times Judith Collins made a joke in her debut leader speech

Judith Collins has been lobbing jokes left, right, and centre during her two weeks in charge of National.
Opinion

Judith Collins today unlocked the secret of her political comedic code. ‘When my eyebrow goes up, it’s a joke,’ she told reporters. Enlightened, we’ve gone back through her first speech as National leader, to excavate the punchlines.

On a trip to the comedy capital of Palmerston North yesterday, Judith Collins announced that no one had escaped from prison while she was minister of corrections. When it was put to her today that in fact people had escaped while she was corrections minister, she set the matter straight. It was a joke – obviously.

Obviously because, as Collins told media this morning: “When my eyebrow goes up, it’s a joke.”

When political journalist Henry Cooke sought to understand better Collins’ method, she was blunt. “You need to bone up on your comedy skills there, Henry,” said Collins, eyebrows unmoved.

Furnished with the new knowledge about the Eyebrow Code, The Spinoff today went deep into the archives, to Collins’ very first press conference as leader of National (two weeks ago).

Here are some of the jokes she made.

Anyone who’s ever spoken in front of a crowd knows it’s important to open with a memorable one liner. Collins came in strong with this ripper, executed with an estimated three millimetre eyebrow rise.

2. ‘Obviously, they were always going to support Gerry’

Rule number one for endearing yourself to an audience is a bit of self-deprecation, and this witticism deserved the full five millimetres of eyebrow travel it achieved.

3. I’m so privileged to represent… the excellent electorate of Papakura’

Like how everyone loves when New Zealand gets mentioned in a movie, everybody loves a dig at their hometown (or electorate). Based on the upsurge of eye on this quip it looks like Collins was campaigning hard for the Papakura vote.

4. ‘Our team has worked so hard in their portfolios’

There’s quite a subtle brow upturn here. This one-liner deserved a better response from the caucus.

A physical comedian needs no words to send their audience home in stitches, and it seems Tape Face may have met his match in Judith Collins. The brows have soared a good centimetre in this moment.

6. ‘I grew up on a farm, I’m a very provincial Aucklander’

I don’t really get this one, to be honest, but it looks like Gerry’s on the verge of a chuckle.

7. ‘I know that myself, Gerry and the rest of the team will be a far better government’

Political comedy is hard to master but there’s a solid half-centimetre of eyebrow travel in this shot. Barbara Kuriger, over Collins’ right shoulder, appears to be offering a famous Kiwi internal laugh.

8. Jacinda Ardern is ‘not someone we should ever underestimate’

I’ll confess to not actually understanding this one. Is the joke that Ardern is someone to be underestimated because she’s an easy opponent? Can someone explain the punchline please?

It’s hard to sustain a full 20-minute set when you’re not getting a lot back from your audience. It may look like Collins is waning a bit in this moment, but thanks to the sharp arch of her left eyebrow we know this must be a real chuckler.

No eyebrow: ‘I’ve got more hair than Todd [Muller]’

Collins’ eyebrows are lower here than her party is in the polls. It might have played like a joke, but it is, when you think about it, simply a statement of fact.