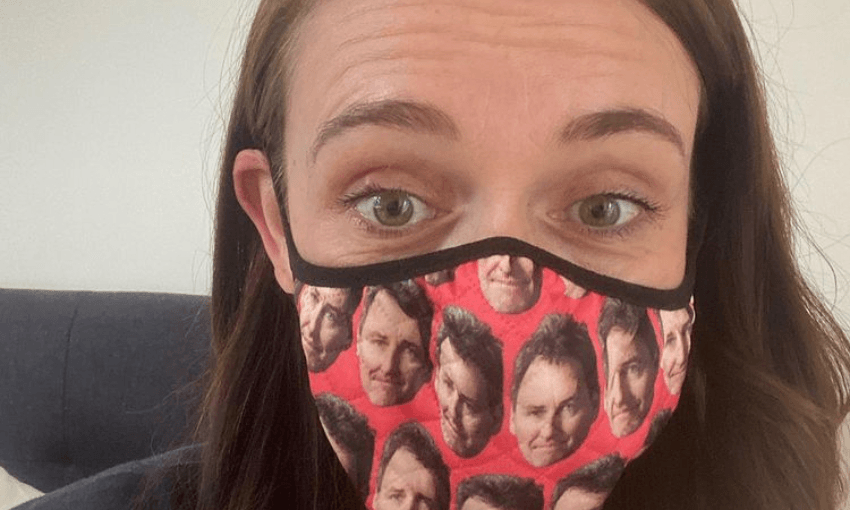 The masks are coming as Ardern seeks advice to mandate use

Confronting a virus becoming more infectious as the pandemic drags on and low levels of scanning, the New Zealand government is looking at a range of new, tougher measures. Justin Giovannetti reports from parliament.

The government is considering requiring mask wearing and mandatory QR code scanning in certain locations as the capital remains under heightened restrictions and a highly infectious variant of Covid-19 spreads across Australia.

Jacinda Ardern’s cabinet has commissioned advice on the new measures, the prime minister told reporters, but there’s no clear timeline on when the new rules could be put into effect.

The government has to date resisted calls to mandate mask wearing and scanning nearly since the pandemic began a year-and-a-half ago. At various times, Ardern and Covid-19 response minister Chris Hipkins have cited difficulty enforcing the measures, fear of causing public inconvenience and the possibility of a backlash from tech giants as reasons against turning a voluntary approach to a punitive one.

The risk posed by the trans-Tasman bubble and the contagious delta variant of Covid-19 have now changed the calculus. Use of masks and scanning has been compulsory during outbreaks in many large Australian cities over the past year.

The director general of health, Ashley Bloomfield, has warned in recent weeks that the pandemic is far from over and a move towards more restrictions by default should be expected in the coming months and years.

While mask wearing has been mandatory on public transit for months, the use of face coverings otherwise has been minimal across New Zealand. That could be about to change. Cabinet will be looking at requiring the wearing of masks in all public places when a region is at alert level two or above.

A change in the virus has brought this about. The delta variant has spread between people in Australia with only fleeting contact, something that was previously considered unlikely with earlier strains of Covid-19. “Emerging evidence and experience has shown it’s not hard for the virus to spread this way,” said Ardern.

The move is welcome, but a little underwhelming, said Otago University epidemiologist Nick Wilson. “More talk about something happening in the future,” he said.

“Some of us have been advocating for 13 months for the use of masks, starting in May last year.” According to Wilson, there’s been little interest despite masks being cheaper and far less inconvenient than a lockdown following a border failure. “I’m astounded the process is like this,” he said.

While mask use is widespread across much of the world, Wilson said he didn’t expect the government to go as far as some jurisdictions in Europe. Many German states now require people to wear two masks, one cloth and one surgical, when in public.

The new rules in New Zealand could also require QR scanning at high-risk locations including bars and restaurants at all times, according to the prime minister.

“There will be some inconvenience with scanning,” said Ardern, but she added that her expectation is that people will come to accept it like they have being ID’d at a club or bar.

According to Wilson, evidence would also indicate that the app should be mandatory at cafes, gyms and churches, basically anywhere where people are speaking loudly.

Use of the government’s tracing app has declined significantly over 2021 and has not picked up much despite the Covid-19 scare in Wellington. Only 1.5 million people have downloaded the app and activated Bluetooth tracking, while fewer than 800,000 scans are being recorded daily on average. If the app were being used by the country’s adult population as designed, that number would be closer to 20 million scans, according to Wilson.

The government’s lack of urgency to require scanning is “incomprehensible,” said Wilson. “It’s just obvious that voluntary persuasion isn’t going to do it. We need to use the power of the law. You get fined for parking in the wrong place but there’s this extreme reluctance to safeguard health public health”.

Part of the advice being sought by the government is how the measures could be enforced. Penalties under the Covid-19 public health act exist but are “relatively modest”, said Hipkins. Depending on the enforcement regime, it could be a $300 fee or a fine of up to $4,000.

While Apple and Google had indicated in the past that they would end the tracing app’s access to a phone’s Bluetooth functionality if it was made mandatory, the prime minister said she hoped the tech companies will change their positions as more countries move towards compulsory use.

While the government won’t need it, there’s widespread support in parliament for some of the move. Act called for mandatory scanning almost six month ago. The party has not been as enthusiastic about a mask mandate.