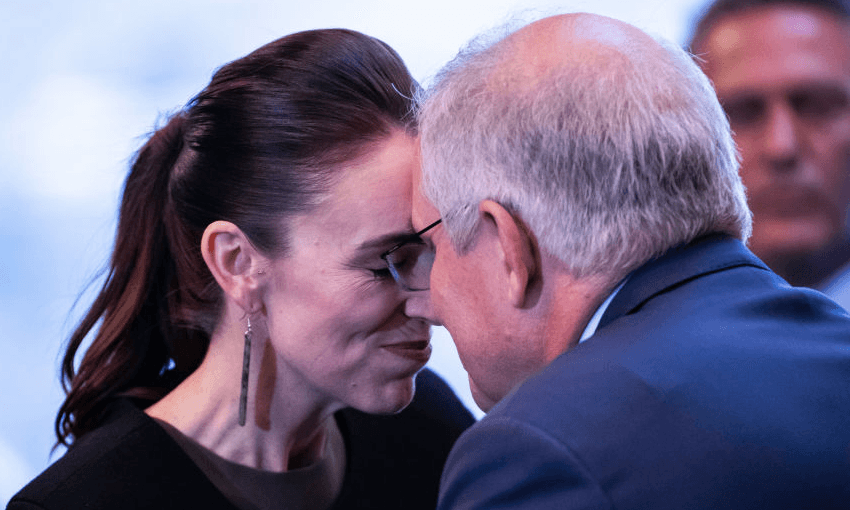 As Ardern welcomes Morrison in Queenstown, what are they seeking from one other?

A short hop and a short stay, but even the sight of two leaders pressing the flesh is a novelty in recent times, reports Justin Giovannetti from Queenstown.

A hefty agenda awaits Jacinda Ardern and Scott Morrison today as they hold in-person talks for the first time in the age of Covid-19, following a year of worsening relations between the prime ministers.

Within the broad programme, the Australians are expected to seek a greater commitment from New Zealand in its ongoing economic tussle with China, while Ardern will continue to press for an end to a hardline programme of deportations across the Tasman.

Scott Morrison’s arrival in the resort town of Queenstown yesterday provided a scene that has become highly unusual around the world for more than a year: two politicians from different countries meeting and shaking hands with no masks in sight. In this case, it also included a hongi between the two leaders.

A pōwhiri was held to greet Morrison at a luxury hotel perched over lake Wakatipu with the Remarkables in the distance. A meeting between the prime ministers is part of the annual calendar, with the last held in early 2020 in Sydney.

Ngāi Tahu leader Edward Ellison welcomed Morrison as a “very rare bird not often seen in New Zealand”. Foreign affairs official Martin Wikaira, who served as the prime minister’s interpreter during the ceremony, sang a version of Waltzing Matilda in te reo Māori. Owing to Covid-19, a Māori leader invited the Australian delegation to skip “the breath of life” from a hongi, but none seemed to take the pass.

At an event later in the evening, Morrison said flooding in Canterbury along with the recent outbreak in Melbourne would be giving the meeting “focus” and a reminder that there’s always a new struggle tomorrow.

The Australians seemed to struggle with the weather, with the temperature hovering around 10 degrees. Morrison came bundled in a wool coat while most of the officials and reporters travelling with him were similarly swaddled. Alongside the promise of beating Covid-19 and an unrelenting focus on prosperity, Morrison noted the chill in his remarks.

There’s a similar chill at the core of Ardern and Morrison’s bond. It’s a deep contradiction. The prime ministers have one of the closest working relationships in the world, with a well used WhatsApp conversation between the two of them and the ability to go by first names even in public remarks. Morrison calls the two countries a close family, but, like many families, they quarrel.

The Australian prime minister has prompted Ardern to show some of the most serious public anger of her premiership, especially after his government oversaw the deportation of children earlier this year. When the two last met last February, Ardern demanded that the Australians stop “deporting your people and your problems”. A year later, the situation has only worsened.

New Zealand sporting star Sonny Bill Williams led a protest in Queenstown, held at the same time as the pōwhiri, calling on an end to Australia’s detention policies. He also called on both countries to accept an offer made eight years ago by New Zealand to resettle 150 people held in Australia’s offshore detention centre. Ardern’s office said the deal is still on the table

The meeting was supposed to be a celebration of both countries largely beating Covid-19. That was overshadowed, however, by another lockdown in the Australian state of Victoria and the reporting of five more community cases in Melbourne yesterday.

The global pandemic was a constant concern in the leadup to the arrival of the Australian delegation, with concerns that the Melbourne outbreak could prompt the postponement of the visit.

The trans-Tasman bubble is facing its most significant challenge yet with the seven-day lockdown in Victoria. New Zealand responded by interrupting travel with the state for at least 10 days. It will require some Australians travelling from outside the state to show proof of a negative Covid test before flying across the Tasman as of tomorrow. Morrison underwent a Covid-19 test before his arrival as a precaution.

The two prime ministers were supposed to start the visit by attending a trans-Tasman rugby game together in Queenstown. However, the Australian side was meant to be the Melbourne Rebels. The match was made impossible by Victoria’s lockdown and moved to Sydney.

Before the meeting started, New Zealand extended an olive branch to the visiting prime minister by joining Australia in its trade dispute with Australia over barley tariffs. The heavy tariff has widely been seen as punishment for Australian criticism of Chinese behaviour in the Pacific.

New Zealand is joining the dispute as a third party in support of Australia, it says, to uphold the “rules-based trading system” that is at the core of the country’s independent foreign policy. That same policy, which often hedges between Chinese and western demands, is also a point of friction between New Zealand and Australia.