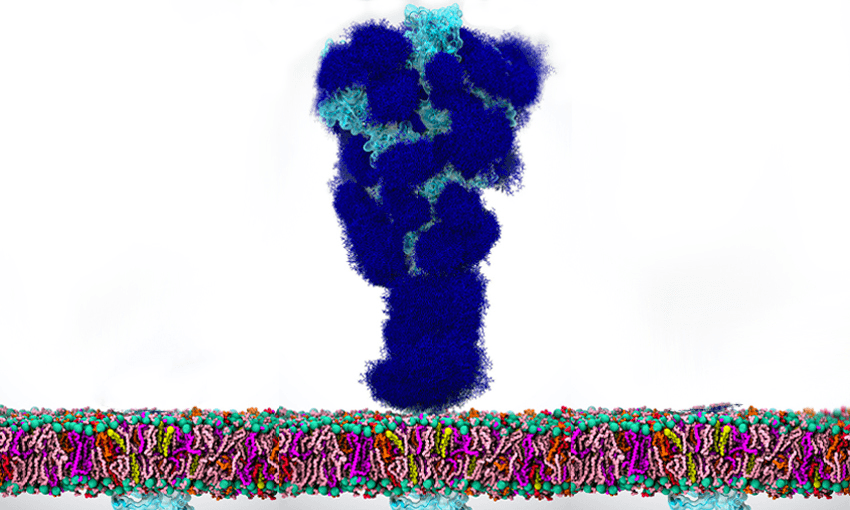 New research might have identified weak spots in the Covid-19 virus molecule that could make for even more potent vaccines and treatments in the future. Mirjam Guesgen explains.

Part of what makes SARS-CoV-2, the virus responsible for Covid-19, so good at causing infection are its spike proteins, which encrust the virus’s surface and help it latch onto and enter human cells.

Researchers have made beautifully detailed models of these spikes, which tell them about the protein’s structure, function, how they cling to our cells, and how antibodies cling onto them.

There’s been one major thing missing though: movement. These frozen-in-time models don’t show how parts of the spike protein morph and flex. Those movements could change how well antibodies bind and therefore how effective they are at destroying the virus.

Now biophysicists in Europe have made a series of animated simulations of spike proteins and published their findings in the journal PLOS Computational Biology.

Close-up still images show that the spike protein is covered in a kind of fuzz – tiny chains of sugars called N-linked glycans. The sugars act a bit like goalies, controlling what gets through them and latches on.

The animated model, which simulates about 2.5 microsecond bursts of movement, showed that these sugar chains sway from side to side. So even though the sugars shield only a small fraction of the protein’s surface at any time, their windscreen-wiper-like movements mean they actually block a lot of the protein’s surface. It’s the difference between a goalie standing still and constantly moving from side to side.

The researchers then found nine places where antibodies could bind, free from the swaying sugars. Four of these sites hadn’t been identified before.

These open binding sites might help scientists develop even better vaccines or treatments.

Current vaccines give our cells the information to make whole spike proteins. The proteins trigger our bodies to make neutralising antibodies that fight the virus in the future (this post and the Toby Morris/Siouxsie Wiles animation below explains more about how how mRNA vaccines work).

The tricky part about immunity is that neutralising antibodies are made specifically for different viruses and even different binding sites. So if the virus changes or mutates, the antibodies might become less effective at stopping the virus infecting our cells. That’s the concern with virus variants.

Instead of providing the information to make the whole protein, future vaccines could tell our body to just make little fragments of it – the fragments with those important binding sites on them.

That would mean our bodies would only need to recognise little parts of the spike, instead of the whole thing, so it would matter less if the virus looked a little different.

Finding new binding sites could also help scientists make better treatments for Covid-19. For example, antibody therapies, which inject patients with lab-made neutralising antibodies. Future versions of this therapy could use a cocktail of different antibodies based on the binding sites scientists have found. Again, by having a mix of antibodies, it’s more likely the treatment will  be effective even if the virus changes.

The animated model study is part of a slew of ongoing research to understand the way the virus works. It’s no “eureka moment” but it is important, says University of Otago molecular virologist Matloob Husain, who wasn’t involved in the study. “Computational models can tell you a lot of things but at the same time it’s not an actual experiment,” he said.

Husain says the next step is to create real versions of the binding sites in the lab and see whether they’re enough to trigger the body to make antibodies.