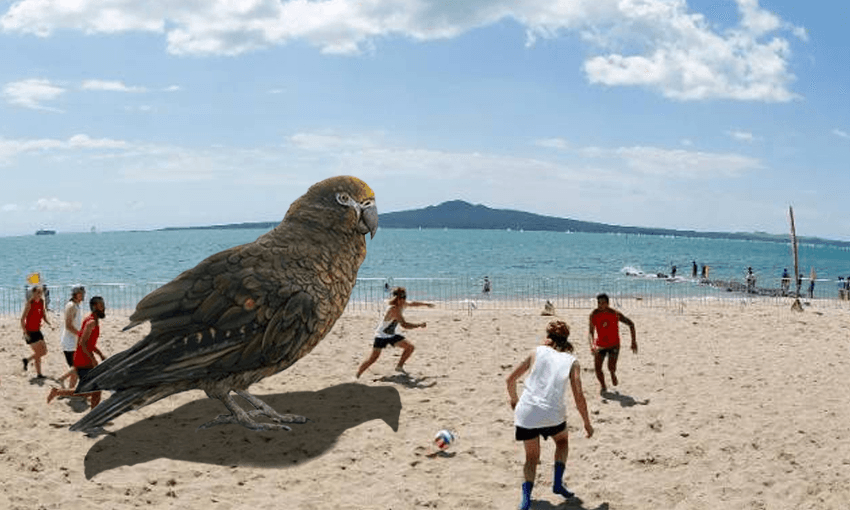 Discovered: the massive AF parrots that once roamed New Zealand

The world’s largest parrot, standing up to a metre tall with a beak that could crack most food sources, used to live in New Zealand, paleontologists have revealed after a breakthrough fossil find.

If you think kea having a crack at your wing mirrors are scary, imagine how much more we’d fear native parrots if they were a metre tall.

That might be a reality on the streets of New Zealand today, had a newly discovered giant parrot not gone extinct millions of years ago. Scientists have uncovered fossils of the big bird in a site near St Bathans in central Otago, not a long way away from another site of paleontological significance at Foulden Maar.

Named Heracles inexpectatus, the bird is the largest parrot ever discovered, longer than the native kākāpo, and much heavier than the Hyacinth macaw from South America. It was given the name because like mythical Greek hero Hercules, this parrot would have been an absolutely massive unit.

The fossil was discovered by a team of expert Australian and New Zealand palaeontologists, and is considered by Canterbury Museum’s senior curator of natural history Paul Scofield as an “exciting surprise”, even for such a fossil-rich site like St Bathans.

“It’s the gift that keeps on giving. It keeps producing amazing finds, and this is among the most amazing we’ve found here,” he told The Spinoff.

Much of what we know about this parrot can only be speculated about, given it lived in the early miocene era about 19 million years ago. However, the speculation of Flinders University associate professor Trevor Worthy is more informed than most. He said it would have been omnivorous, primarily finding its food on the forest floor, and highly competitive in the wider ecosystem.

“Our main premise is that it occupied the niche on the ground that is eating the fruit and seeds coming off the abundant trees at the time,” he said.

“On an island, there’s normally only one large bird that does this. On the Mascarene Islands, it became the dodo.”

“So whatever gets in and takes that role, on a small island, usually becomes the only one. New Zealand is different because it’s bigger, and has a more diverse set of habitats. So it did have moa and its ancestors, and it did have the otidiformis, which is an adzebill.”

It’s considered unlikely by Dr Worthy that Heracles inexpectatus would have been a master of the sky, given how big it was. However, it could still have used height to its advantage.

“When you’re a parrot, you’ve got a third leg (because of the big beak.) So the kākāpō can’t fly, but it can still get to the top of rimu trees and forage in the canopy. And what they tend to do is glide back down to the ground, so I’d be surprised if it couldn’t glide downhill if it wanted to.”

Imagine that – you’re having a lovely walk through the forest, wearing a lovely floral hat perhaps, before a monstrous creature swoops down on you from above. It would have been heavy, to say the least.

It probably also would have had a mighty beak, though the fossil that was discovered didn’t have one attached. However, extrapolating out from the kākāpō, which Heracles inexpectatus was about twice the size of, it could well have exerted quite a bit of force, said Dr Scofield.

“We can say the legs were twice the size of a kākāpō, and so the bill could have been twice as strong as a kākāpō. And anyone who’s been bitten by a kākāpō will tell you, they’ve got an extraordinary force in their bill.”

“So if the entire body was scaled in much the same way as the kākāpō, it would’ve had a rather impressive and rather powerful bill – much more powerful than any parrot living today.”

But would it have been a threat to humans, like kea are to sheep or rental cars? Dr Worthy wasn’t so convinced about this, but did caution that parrots shouldn’t be underestimated.

“I think generally parrots are clever things. It would potentially have the ability to be destructive, for sure. A kākā for instance is hard to keep in a cage, because it can rip all the nails out. This thing was obviously bigger than that, and would have the potential to do a lot more damage to a car parked at a ski-field.”