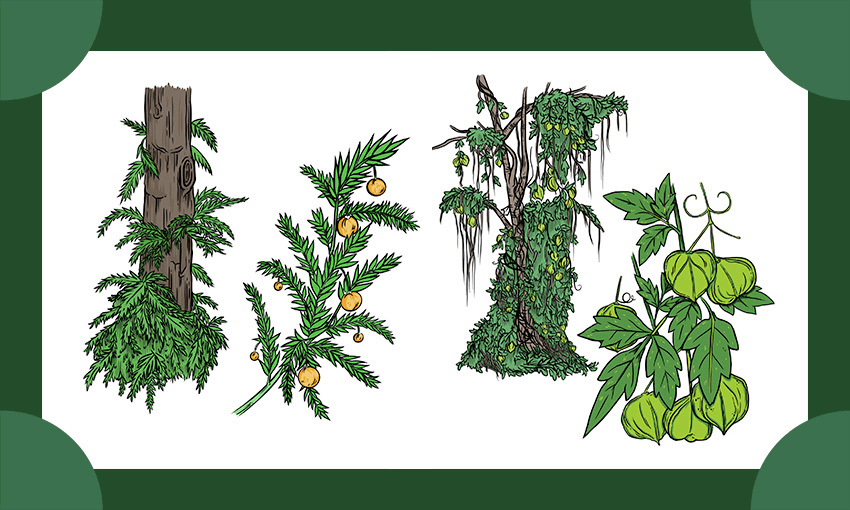 All around us, sleeper weeds are quietly multiplying and spreading – and we may not even notice they’re there until it’s too late.

This collaboration began at the Drawing Science workshop, hosted by The Spinoff. A directory of illustrators who are eager to collaborate on science projects is available here, via the Science Media Centre.

Aotearoa has a massive weed problem. While we have a little over 2,300 native plant species, we have introduced over 25,000 species from other countries. More than 1,800 of these introduced species now survive in the wild, with another 20 establishing in the wild each year. While not all introduced plant species become weedy, this vast pool of 25,000 species means we have a conveyor belt moving some of these species from our gardens, horticulture and agriculture into the wild. Already we have around 400 environmental weeds we manage around the country, and with more becoming weedy every year it’s difficult to figure out where to focus our efforts as the conveyor belt keeps shooting more weeds off the end and into the wild.

Sleeper weeds, so named for the famed “sleeper agents” of cold war espionage, are the introduced plant species that are reproducing in the wild, but in very small numbers, with no noticeable impact. Their small populations just tick along in the background until ‘activated’. Some are very slow growing and may take 40 years to produce their first seeds, and 100 years to become widespread. Sometimes they are small, inconspicuous plants that we don’t notice until they’re widespread, and some haven’t yet found the right pollinator or environmental conditions to ‘take off’ and become more invasive. However, eventually the sleeper weeds ‘awaken’, and become more noticeable in the environment. By then it can be too late, and their populations explode. Widespread weeds often have brightly coloured flowers like gorse or large pods like moth plant, and in a large infestation they stand out. These weeds cause great harm to our ecosystems, but while we focus all our attention on getting rid of one or two widespread weed species, there are five or even ten sleeper weed species sneaking in behind us and ramping up their numbers and impact. All too soon we realise our error in ignoring these species when we end up with 5-10 new weeds causing massive impacts in our ecosystems. Some clear strategies and roles are needed to prevent managers and community volunteers running around like headless chooks.

It’s very easy to focus on the widespread weeds that are in our faces every day – they are everywhere, and we can see they harm they cause as they strangle forests or smother seedlings. But these weeds were the “sleeper weeds” of 50 or a 100 years ago. No one thought gorse or broom would be a problem when they were used as hedge fencing on farms 100 years ago. The costs of trying to manage gorse or broom now are astronomical. Just like Covid-19 and other pests and diseases, eradication (elimination) of weeds is the cheapest strategy and most beneficial for our ecosystems. However, we only have the resources to eradicate weeds when they are in very low numbers or small patches. Once they expand their populations, just like the delta strain of Covid-19, we must switch to management that protects our valued assets: for delta this is hospital capacity so that our sick can be taken care of, for weeds it’s our high value ecosystems we are protecting.

If we focus too much of our efforts on widespread weeds – beyond protecting high value sites – then we run the risk of getting distracted while sleeper weeds run rampant and become our next widespread weeds. People are prone to “plant blindness” – we more easily recognise and remember images of animals than plants. Generally, we have an inability to notice the plants in our own environment – we tend to group “green things” together in our minds. So, it’s not surprising that we don’t notice sleeper weeds in small pockets in our environment until it’s too late.

Avoiding total distraction by weeds like moth plant and climbing asparagus, and focusing on sleeper weeds, means we can detect and destroy them quickly – increasing our chances of eradication or at least preventing them from becoming widespread. Balancing up protecting high value sites from widespread weeds with detecting and destroying these sleeper weeds can be super tricky. Often the community wants agencies to deal with the widespread weeds when we know the long-term gains are higher when we eradicate the sleeper weeds.

We’re getting pretty good at using science to predict which of the 25,000 plant species in Aotearoa will become the next widespread weeds. We know that species that are weedy overseas are also likely to be weedy here. We can use traits, such as how many seeds are produced or their temperature tolerances, to make predictions and take precautionary action. What’s fairly clear is that the more people plant and move introduced species about, the more likely they are to find conditions that are suitable for surviving in the wild and becoming weedy. It’s no surprise then that the vast majority of our environmental weeds were once garden plants, bred to thrive and sold in nurseries around the country. So prevention is the key to weed management and it can start in your own backyard. If you’re weeding your garden, take care to dispose of the weeds carefully – they can resprout and grow. Dumping garden waste in local parks can cause new infestations that get out of control. If you know you have environmental weeds in your garden, then replace them with a non-weedy variety or even better, a native species. Every weed you remove prevents a weed infestation in your local reserve.

Don’t let the widespread weeds distract you entirely – keep one eye open for those sleeper weeds – and when in doubt give native biodiversity a shot in the arm by planting native species in your garden. Native plant species need some PR – many have beautiful flowers and attract all sorts of native wildlife. Get some advice from Weedbusters, your local nursery or council. But never, never turn your back on the sleeper weeds.