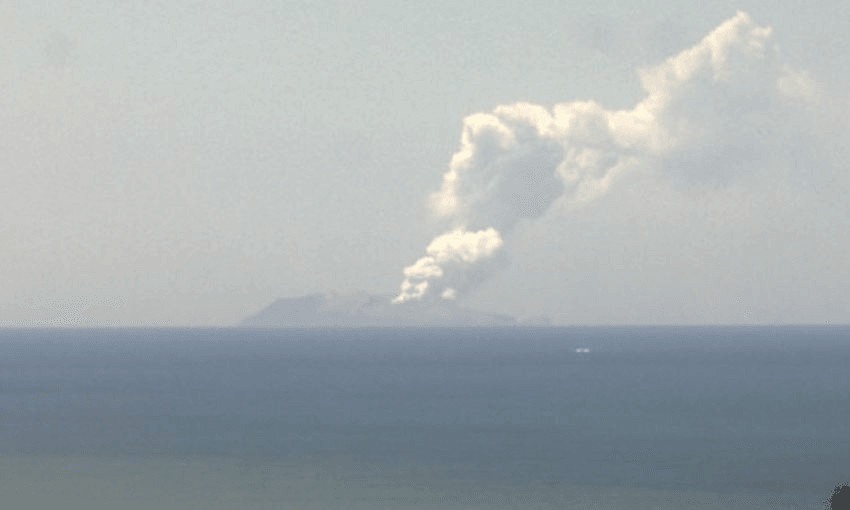 A photo of Whakaari/White Island from 2.30pm (Photo: Geonet)

Whakaari/White Island eruption: What you need to know

A photo of Whakaari/White Island from 2.30pm (Photo: Geonet)

Five people are dead, a number unaccounted for and up to 20 injured, some critically, after a volcano erupted in the Bay of Plenty this afternoon.

Police have confirmed that five people are dead following this afternoon’s Whakaari/White Island eruption. Deputy commissioner John Tims said it was too early to confirm nationalities but both New Zealanders and overseas tourists were involved. He told media the island was unstable and the physical environment was deemed too unsafe for police to return to and police did not know if there were still people alive on Whakaari/White Island tonight, reported RNZ. Police earlier said 23 people had been evacuated from the nearby area and up to 27 were still believed on the island.

National Operation Commander Deputy Commissioner John Tims has confirmed that there has been one fatality as a result of the eruption and that there is “likely to be more”. Around two dozen people are believed to still be on the island, but conditions are currently too dangerous for police and rescue services to attend.

“I know that there will be a huge amount of anxiety for those who had loved ones on the island at the time,” said prime minister Jacinda Ardern, who will be travelling to Whakatāne tonight with minister of defence Peeni Henare. There is not expected to be significant impact to the rest of the North island, and ash fall should remain confined to Whakaari.

Residents in the area are being urged to continue to follow local authorities.

“Ash fall appears to be confined to the island, although there may be a small amount reaching East Cape in the coming hours,” GNS Science duty volcanologist Geoff Kilgour says.

“Our monitoring equipment is still operating, and while we have seen a steady decline in activity, there remains significant uncertainty.

“Currently there are no signs of further eruptions, but we will continue to closely monitor Whakaari/White Island for further signs of activity.”

University of Auckland professor and volcanologist Shane Cronin says sudden eruptions like the one that took place today can happen at any time on a volcano like White Island.

“Magma is close to the surface, and the heat and gases from this heat the surface and ground waters to form vigorous hydrothermal systems. We know hydrothermal and so-called ‘phreatic’ eruptions can occur suddenly and with little or no warning because they are driven by the expansion of super-heated water into steam.

“The hazards expected from such events are the violent ejection of hot blocks and ash, and formation of ‘hurricane-like’ currents of wet ash and coarse particles that radiate from the explosion vent. These can be deadly in terms of causing impact trauma, burns and respiratory problems. The eruptions are short-lived, but once one occurs, there are high chances for further, generally smaller ones as the system re-equilibrates.”

My god, White Island volcano in New Zealand erupted today for first time since 2001. My family and I had gotten off it 20 minutes before, were waiting at our boat about to leave when we saw it. Boat ride home tending to people our boat rescued was indescribable. #whiteisland pic.twitter.com/QJwWi12Tvt

A revised estimate from the police is that there were fewer than 50 people on or near the island at the time of the eruption. An unknown number of people on the island are still unaccounted for. One person transported to shore has been critically injured in the eruption.

An update from Geonet says the eruption occurred at 2.11pm and generated an ash plume of around 12,000ft (3658 metres) above the vent. Ash fall appeared to be confined to the island and they were not expecting more than a minor amount to reach East Cape in the coming hours. “Our monitoring equipment is still operating, and we have seen a steady decline in activity since the eruption. There remains significant uncertainty as to future changes but currently, there are no signs of escalation.”

The Herald is reporting that the majority of people visiting Whakaari today were from cruise ship Ovation of the Seas, which is berthed at Port of Tauranga. Port company chief executive Mark Cairns was quoted as saying he understood the majority of those injured in the eruption were from the ship.

Prime minister Jacinda Ardern has addressed the media, describing the eruption as an “evolving situation” and advising that people in the area avoid Whakatāne Heads and Muriwai Road. “We believe that 100 people were around or on the island at the time,” said Ardern. “All our thoughts are with those affected at this stage.” Several people believed to be on the island are still unaccounted for. Civil Defence and NZ Police are expected to hold a press conference at 5.30 pm.

Whakaari/White Island, New Zealand’s most active cone volcano, located 48km off the eastern coast of the Bay of Plenty, is erupting. Large plumes of steam can be seen from the volcano and GNS volcanologist Steven Sherburn confirmed the eruption began about 2.15pm.

Stuff reports that up to 100 people may have been on the island at the time, and St John told Newstalk ZB up to 20 people may have been injured. Some are believed to be critical and several rescue helicopters are on the way. An image from a GNS camera appears to show people on the island. The Herald reports an emergency operation centre has been set up at Whakatāne Hospital to work alongside Civil Defence.

Is it still dangerous?

Civil Defence says the immediate vicinity of the volcano is hazardous. GNS Sciene Te Pū Ao has set the Volcanic Alert Level to four (danger on volcanic cone and all island, possibility of very large eruption) and the Aviation Colour Code to orange. RNZ reports that people living in or near the area have been warned to close all windows and doors and wear a dust mask or handkerchief because of falling ash, and the public has been urged to avoid Whakatāne Heads and Muriwai Drive.

Was there any warning?

RNZ reported there has been moderate volcanic unrest on the island for the past few weeks, prompting GNS to say it appeared the volcano was possibly entering a period where eruptive activity is more likely than normal. At the end of October, Stuff reported that sulphur dioxide gas output and volcanic tremor levels were at the highest levels since 2016.

Has this happened before?

There was a short-lived eruption on Whakaari/White Island in 2016. Before that, a series of small eruptions took place between 2012 and 2013. The longest historic eruption period on Whakaari/White Island was between from December 1975 to September 2000. According to Geonet, the last major eruption of this episode was in late July 2000 and covered the crater floor area in scoria, also displacing a crater lake and forming a new explosion crater 150m across. Major eruptions from 1981 to 1983 altered much of the island’s landscape and destroyed the extensive pōhutukawa forest. In 1914, several sulphur miners were killed in an eruption.

More details will be added as they come in.