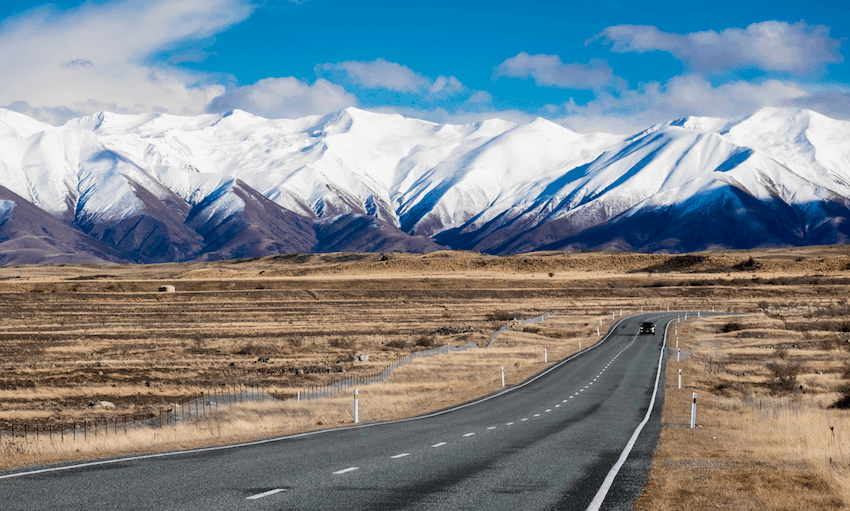 The Mackenzie Country, with the Southern Alps – the product of the Alpine Fault – in the background (Photo: Getty Images)

By Ursula Cochran and Jamie Howarth
Guest writer
Made possible by

The Mackenzie Country, with the Southern Alps – the product of the Alpine Fault – in the background (Photo: Getty Images)

New research shows that the risk of the big one hitting the South Island’s spine is far higher than previously thought, write Ursula Cochran and lead researcher Jamie Howarth.

Calculating the chance of an earthquake on a particular fault currently relies on the long geological earthquake record, which is both notoriously hard to find and labour-intensive to decode. These records are rare worldwide, but here in New Zealand, on the Alpine Fault, we have one of the best. It’s been used to test whether computer models that simulate earthquake occurrence can replicate reality – and it turns out, they can. The days of routine forecasts of earthquakes on known active faults are getting closer.

It’s been a multigenerational journey of discovery. And it’s not over. But with research published this week in Nature Geoscience, there’s a step-change afoot in the forecasting of earthquakes.

It started with a pencil line in a field notebook back in the 1940s. At first it marked the boundary between rock types that Harold Wellman and Dick Willett noticed as they explored the South Island’s West Coast for minerals. But Wellman was quick to understand its significance. He knew it was the reason for the Southern Alps. He knew it was the reason that a band of dunite rock had been separated by hundreds of kilometres – leaving remnants in Nelson and Fiordland. In a time before plate tectonic theory, he argued for geologically recent and rapid sideways movement along the 3D plane he named the Alpine Fault. And he found evidence for how this occurred: metre-scale movement in repeated large earthquakes.

Since then, there have been numerous players and diverse research techniques, and our understanding of the Alpine Fault and its earthquakes has bloomed. We now recognise it as the boundary between the Pacific and Australian tectonic plates and one of the longest, straightest, fastest, sideways-moving faults on Earth. That sounds impressive but, as humans trying to live alongside this fault, we want to know how big and frequent the earthquakes are.

Let’s travel back in time to uncover the fault’s earthquake behaviour. The first major stop is 1717CE. Although that’s 304 years ago, we can still see the damage to hillsides, stunting of trees, changes to rivers and dune systems from one end of the West Coast to the other – evidence of a magnitude (M) 8.1 earthquake on the Alpine Fault. To go further back in time, we need to start digging. Trenches dug across the fault revealed the markings of more past large earthquakes. The picture is building.

A big leap in understanding came when an outcrop at Hokuri Creek in South Westland, recognised in the 1980s, was revisited in the age of high-resolution radiocarbon dating and microfossil analysis, enabling a record of 22 large earthquakes to be uncovered. This 8,000-year-long treasure trove provided unequivocal evidence that the Alpine Fault was a creature of habit, large earthquakes occurred about every 300 years, and there was a 30% chance of the next big one within 50 years. With confirmation from a similar record at nearby John O’Groats wetland, it could be seen that these earthquakes were big – but how big?

Enter the suite of West Coast lakes adjacent to the Alpine Fault – Kaniere, Mapourika, Paringa, Ellery. They’re not only superbly scenic, they also hold high-resolution earthquake records. Cores from the lakes reveal that normal sediments are frequently interrupted by shaking-induced underwater landslides and high influxes of sediments from landsliding in the surrounding hills – stark evidence of past earthquakes. Analysis of the last few thousand years shows that here, along the central section of the Alpine Fault, there’s a higher frequency of earthquakes – every 250 years on average.

Our research universe has expanded from two wetland sites spanning 20km to six sites spanning 350km. Statistical testing of ages determines whether event signatures are the same or different earthquakes, and shows that some events ruptured most of the fault at once and others ruptured shorter sections. This means the Alpine Fault produces both M ≥8 and M ≥7 earthquakes. The multi-site record shows there are phases of major earthquakes (M≥7) alternating with phases of great earthquakes (M≥8). We’re currently in a phase of great earthquakes – so are we due for an M ≥8?

The geological record of past earthquakes is long, but not long enough to accurately assess the magnitude of the next event. Computer models of faults that simulate a hundred thousand years of earthquakes have the potential to answer such questions, but how do we know they’re realistic? In this week’s Nature Geoscience report, the known past earthquakes are used to test whether physics-based earthquake simulators do a good job at replicating reality. And, when realistic fault geometry is used, they do. This means we can marry real-world and computer-generated earthquake data to obtain a statistically robust estimate of magnitude for the next earthquake.

Tune in now for an updated earthquake forecast for the Alpine Fault: there’s a 75% chance of a large earthquake in the next 50 years and there’s an 82% chance that the earthquake will be magnitude 8 or greater. That’s a much higher likelihood than previous estimates and it comes with greater certainty about the size of the next earthquake. To be clear: these are forecasts, which assess the likelihood of something taking place; they are not predictions.

A magnitude 8 earthquake on the Alpine Fault is inevitable. It could happen tomorrow. If there’s a very unusual blip in the system, it may not happen for another century. But it’s most likely that Generation Z, and many of us who are older, will witness it.

The Earth’s crust will move metres in a matter of seconds, the ground will shake for several minutes. What the 2016 Kaikōura earthquake was for North Canterbury and Eastern Marlborough, this earthquake will be for much of the South Island.

When this earthquake happens, damage will be inevitable – but disaster is avoidable. It’s within our capability as individuals, communities, and, as a nation, to make sure this earthquake does not become another Shaky Isles tragedy. With every piece of vulnerable land we “red zone” before the earthquake, every earthquake-prone building we strengthen, every back-up supply of water, power, transport that we put in place, the more likely this earthquake will be a major inconvenience rather than anything worse. Preparedness works to reduce impacts, so it’s the best thing we can all do right now.

We’ve progressed from the pencil line in a field notebook to forecasting the timing and magnitude of the next Alpine Fault earthquake. But the real step-change unfolding now is the potential to use earthquake simulation models to forecast earthquakes for other faults – without the need for the often elusive long earthquake records. It’s time to get to know all our faults better, act on the risk they present, and make Aotearoa an even better place to live, earthquakes and all.