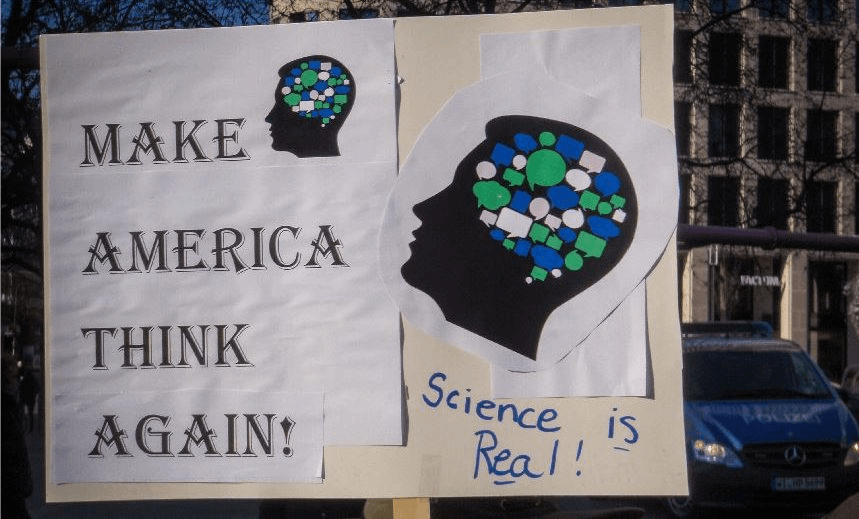 Why I won’t be joining the science march tomorrow

By John Pickering
Guest writer
Made possible by

Across New Zealand tomorrow, scientists (and others) will join their peers around the world in a March for Science, calling for ‘science and knowledge to be reaffirmed as fundamental to the democratic decision making that supports society in Aotearoa New Zealand’. Local organisers explain their motivation here; at the Spinoff recently, Nicola Gaston powerfully explained why she would be pitching in. Here John Pickering explains why, having thought it over, he has decided against taking part.

When I’ve marched in the past it has been to protest or celebrate. The call for a March for Science, due to take place in New Zealand tomorrow, has me confused as to its purpose.

When I first heard the suggestion of a March for Science in New Zealand I admit I was immediately sceptical (occupational hazard). The suggestion had come in response to the policies of the Trump administration in the US. I am appalled by many of them and by the apparent ignoring of the scientific consensus – but then given the flip-flop on so much that was said in the campaign, it would take a brave person to predict there won’t be a similar flip-flop with respect to climate change policies and the like. That aside, is the March in New Zealand intended to be a protest against Trump?

Nicola Gaston in a persuasive blog post writes that with her Bachelor of Arts in her back pocket she will be marching for science and the scientists. Paraphrasing Niemoller she writes “First they came for the scientists, but I was not a scientist, so I did not speak out”. She hit a nerve with me – it is a sentiment that has resonated strongly in me ever since I walked though Auschwitz concentration camp and spent several years living in a country soon after the communists had relinquished power.

It is right and proper to speak out for the oppressed, whoever they are and whether we agree with them or not. However, the headline on Nicola’s post, “Why scientists need to go to the barricades against Trump – and for the humanities”, and the first few paragraphs paint the call to march as a political protest against Trumpian rhetoric and policy. This, for me, is not an encouragement to march in NZ. There are many many countries and issues around the world that I abhor and that I think reflect more closely Niemoller’s sentiments – “First they came for the migrants”, “First they came for the children (for the sex trade)”, “First they came for private property” – and I struggle with what I can do about any of them. However, marching in New Zealand protesting policies in another country is not something I see as effective unless we are demanding action from our government against those countries.

Since Nicola wrote that piece, the March organisers have written about the reasons for the March (here and here). While what has happened in the US is still very much to the fore, the organisers’ attentions seems to have turned towards a protest against policies of the current government. “Our current government has and continues to be ineffective in defending our native species and environment,” writes Geni, a Christchurch organiser. “The government believes they are improving freshwater, yet they aren’t utilizing NZ freshwater ecology research outputs or freshwater scientists for these decisions,” writes Erin in Palmerston North. “You only have to look at the Land and Water forum to open the discussion about the government ignoring the advice of scientists in regards to water quality,” writes Steph in Auckland. And the March for Science website advises: “The dismissal of scientific voices by politicians is perhaps best encapsulated by our former Prime Minister’s dismissal of concerns about the impact of our dairy industry on water quality.”

The organisers, in the spirit of peer review, invite critique. My first thought is that if people want to protest the government’s actions with respect to water quality, then please do so. But please don’t dress it up as a “March for Science” as if New Zealand politicians are inherently anti-science. It comes across as a belief that the New Zealand government is tarred with the same brush as the Trump administration with respect to its treatment of science. I don’t think that comparison is fair.

As an aside, I believe we must be careful with the generalisation “anti-science”, a phrase I’ve regularly heard from the voices and pens of scientists in the past few years. The phrase has almost always been used to describe people who take stances in opposition to the scientific consensus on matters such as vaccinations, fluoridation, or climate change. I don’t believe these people are anti-science per se – indeed, they often try (and fail) to use science to back their views. Furthermore, they may well embrace the findings of science in general. Troy Campbell and Lauren Griffen’s recent post in Scientific America is a good panacea against the loose and pejorative use of the term “anti-science”.

Another aspect of the call to march that I find difficult is the statement “We acknowledge that in Aotearoa New Zealand the scientific community has yet to live up to the principles of Te Tiriti o Waitangi, and that there is an ongoing process of decolonization required to achieve greater inclusion of Māori in the scientific community.” I admit I’m not entirely sure what this means. However, as a member of the scientific community it sounds like I’m being slapped over the wrist. Further, I feel it is accusing me of some form of racism. I’m sure this was not the intention, but it is the impression I get and one I don’t like getting.

This is all a pity, as I’d hoped that the March for Science would be more of a celebration, with the added value of standing in solidarity with scientists who have been silenced or disenfranchised. To be fair, celebration is obviously on the mind of some of the organisers such as Cindy from Dunedin: “together to celebrate the quest for knowledge and the use of knowledge to protect and enhance life… hope that the March for Science Global initiative will empower scientists and other knowledge-seekers to continue their important work and to share it widely.” However, this does not seem to reflect the overall tone of the call.

One of the goals of the March is to highlight that “good scientists can be political.” I applaud this sentiment and it is something I have tried to be take on board in the past – twice I stood as a political candidate in the general election (2005 and 2008). Beyond protest, I would encourage all scientists to spend a few minutes with their local MP explaining why and what they do. The temptation is to bemoan the lack of funding, but I would suggest that funding follows understanding, and we need to engage with politicians and as we do so to recognise the complexity of the decision making with all the competing interests that they have to make.

I began with a question, to march or not to march? As I’ve written this, I’ve come to the conclusion that, on balance, the call has not resonated with where I’m at, or with what I think of as effective dialogue with politicians, therefore I will not be marching. I appreciate that others will disagree; nevertheless I wish them a very positive experience.

John Pickering is associate professor in the Department of Medicine at the University of Otago based in Christchurch. This post first appeared on his blog.