Ten days after the young orca whale calf, named Toa, became separated from its mother in Plimmerton harbour north of Wellington, the Department of Conservation faces a difficult decision: what to do if the pod can’t be located?

New Zealanders have been enthralled by the saga of efforts to reunite Toa, the juvenile orca who is not yet three months old, with his pod. Not since Happy Feet the emperor penguin ate several stomachs-full of sand has a wild animal received this much attention.

But while the focus has been on scouring the seas by boat and plane in search of Toa’s pod, there needs to be a plan B and C according to a leading marine biologist and animal ethicists.

Toa has been kept in a temporary pool since the weekend due to unfavourable weather conditions in the Plimmerton harbour but as time stretches on, concerns about the animal’s welfare grow.

The orca is being cared for around the clock by DOC staff and veterinarians but because of Toa’s young age, what he really needs is his mother, according to marine biologist Karen Stockin of Massey University. “He is a new-born, a mammal totally dependent upon his mother for nutrition and his pod for the development of critical life skills,” she says.

“While excellent veterinary care has enabled Toa’s health to stabilise in the interim, the question must be asked, how long can he remain stable in the current situation?”

The question is both a biological one and an ethical one.

Orcas have a complex social structure consisting of a mum and her calves, their pod, the wider clan (a group of pods) all the way up to a community of several clans in some areas of the world.

It’s through these social groups, particularly their relationship with their mothers, that young orcas learn calls or songs and learn how to hunt. Without these skills, and their mother when they’re young, they’re unlikely to survive out at sea.

Although Toa is receiving care in the form of food and treating his colic, as well as injuries sustained during his stranding, the situation is a stressful one for the calf. It has SPCA chief scientific officer Anja Dale “extremely concerned”.

“Body lacerations, being separated from his mother and pod, being tube-fed, regular veterinary assessments, being surrounded by people, and being transported to a pool are all animal welfare compromises,” she says.

When it comes to what lies ahead if the pod can’t be located, euthanasia may be the most humane option. Stockin says “internationally-recognised practice for separated cetaceans [whales and dolphins] this young is either lifelong human care or euthanasia. Notably, this is based on clear scientific rationale around welfare and survival outcomes.”

A life in captivity can’t fulfil an orca’s behavioural, social and mental needs, Dale says. “Animal welfare science has clearly demonstrated that we cannot meet the welfare needs, or provide a good life, for orca in captivity,” she says.

DOC was not available to comment directly about which options they’re considering, or what factors will inform the ultimate decision about what to do with Toa.

But DOC said in a statement that it is still planning a range of scenarios. “We are optimistic that we may find the pod, and the orca’s health is still stable, but we are also being realistic as we consider the ongoing welfare of this animal – that has to be our number one concern,” said DOC marine species manager Ian Angus.

Others have pointed to the financial consideration of continuing to care for Toa. The Taxpayers’ Union is “cautiously raising concerns” about the cost, which currently totals around $10,000, not including the cost of DOC staff. Talkback host Peter Williams wrote in an opinion piece that the cost is “beyond a joke”. 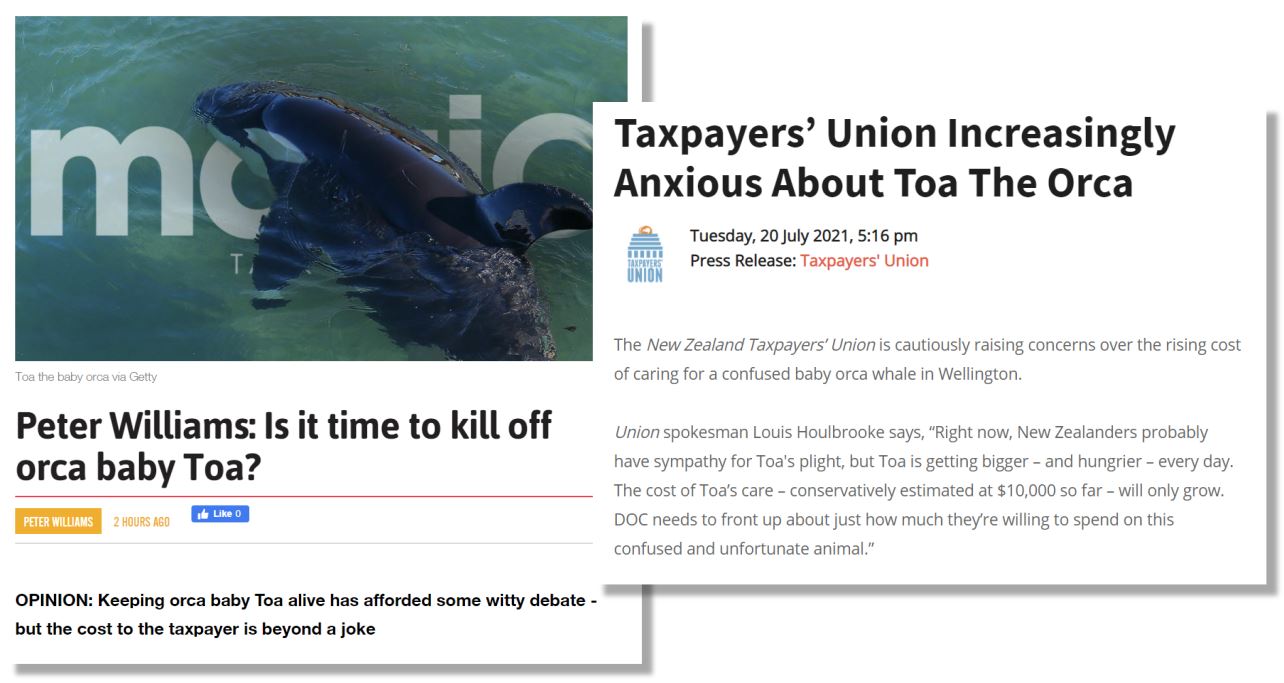 On the ethical side, it’s a matter of time, according to bioethicist Mike King. “Throughout, it has been, and continues to be, a time-critical situation,” he says. “This means that those involved cannot usually spend a lot of time enumerating options, assessing their likelihood of success, and weighing the different reasons for and against. They must make decisions under conditions of uncertainty by necessity.”

Providing Toa with care could give him a good life if his pod is located quickly, but if not, then his current life in the pen is a stressful one and not in his best interests.

Then there’s the wider ethical question of whether to interfere with cases like these in the first place. “Why intervene in this case, when the lives and welfare of wild animals are usually regarded as their own business? Should we find out how to improve the welfare of wild animals and more routinely intervene in their lives if we have reason to believe we can benefit them?” King asks.

People’s emotional investment in wild animals is paradoxical, according to Annie Potts, professor in human-animal studies at the University of Canterbury.

“This is commendable, of course. But at the same time, bobby calves – also infants who miss the mothers they are taken from – are slaughtered within days of birth or confined in veal crates to produce so-called gourmet cuisine. There is no difference between the whale calf and the bovine calf, other than human reverence for one and human oppression of the other.”

In the end, the experts agree that New Zealanders, especially those in positions to be making decisions about what happens with the orca calf, need to put Toa first.

“We all crave a Disney happy ending, but what matters most here is not our understandable human sentiment and emotion, but the viability and welfare of Toa,” says Stockin.